Once upon a time, there was a 1980 teen comedy called "Little Darlings." It raised some eyebrows and ignited certain libidos by pitting two of the most popular young actresses around—Tatum O’Neal of "Paper Moon" and Kristy McNichol of TV’s "Family"—in a race to lose their virginity first while attending summer camp.

The premise, thankfully, wasn’t nearly as tawdry as it sounded. And the stars—especially McNichol, bestowed with gifts beyond her years—were able to bring out some dramatic truth in their pursuit of deflowering. Sadly, both actresses would face real-life struggles as they matured in the spotlight. Meanwhile, with his feature debut, director Ronald F. Maxwell had earned himself the opportunity to create not one, not two but three Civil War epics—two of which, 1993’s "Gettysburg" and 2003’s "Gods and Generals," boast extended cuts whose running times are probably longer than the battles they depict.

He also paid his dues doing "The Parent Trap II" for TV, if that makes you feel better

Travel forward to the age of the hipster, ethnic prints, Brooklyn chic and Jenny Lewis "wa-hoo"-ing on the soundtrack. For her directing debut Naomi Foner—the Oscar-nominated screenwriter and mother of actors Jake and Maggie Gyllenhaal—chose a variation on the theme of sexual initiation for girls but with an artier, glossier sensibility. And she recruited two of the best and brightest of today’s young female talent pool, Dakota Fanning and Elizabeth Olsen.

That is basically where any justification for making—or even watching—"Very Good Girls" begins and ends.

During their final summer together before college, New York-area residents and lifelong pals, introspective Lily (Fanning) and outgoing Gerri (Olsen), decide to relieve themselves of the burden that is their virginity. To celebrate their decision, they strip down and run stark naked on a crowded public beach before leaping into the water—perhaps in an attempt to get said deed done as quickly as possible since there is no other reason for their nude frolicking.

Instead of being taken away by securities guards or ravaged by hooligans, however, they later bump into an ice cream vendor (Boyd Holbrook) on the boardwalk. David’s insolent attitude (he declares his wares to be "recycled industrial waste"), an at-the-ready camera and sun-bleached tussled hair—indicating, of course, that he is an a rebel, an artist and in need of a hot-oil treatment—proves to be a turn-on. For both girls.

And so the plot seesaws between Gerri, who is open about seeing David now and then, and Lily, who is conflicted by the strong attraction she feels for him and keeps their meetings a secret from her friend. Too bad they have to share the same infatuation, since Holbrook’s dollar-store impersonation of Ryan Gosling stretches only so far. Will any film this year feature a moment more pretentious than David asking Lily to read a few lines of Sylvia Plath’s poetry before their first kiss? That guy deserves a smack to the kisser all right.

Of course, we are introduced to the families who produced these oddly sophisticated naifs (for the record, Fanning, 20, and especially Olsen, 25, are barely believable as high-schoolers). Foner thought it important to recruit the likes of Ellen Barkin and the suddenly ubiquitous Clark Gregg as Fanning’s repressed parents. Demi Moore and Richard Dreyfuss are Olsen’s more grounded folks. You would think the director wouldn’t distract us with these recognizable performers without at least putting them to good use.

Nope. Ensconced in a mausoleum of a suburban mansion, Barkin’s shrink lives up to her name by barking at her three daughters, including a wasted Kiernan Shipka from "Mad Men." Meanwhile, Gregg—a doctor whose office is downstairs—inconveniently trysts with a patient while dinner is getting cold, a concert is going to be missed and his loved ones await upstairs.

Seeking shelter from the storm that is her WASP-y rich-girl lifestyle, Lily hangs with Gerri’s family in their cozy, cluttered gluten-free abode where husky Dreyfuss is forever rattling off a stream of cultural references as if he were on a talk show and Moore’s aging hippie is so sullen and silent, she might as well be part of an art installation.

Strangest choice by a long shot? Foner hiring her son-in-law, Peter Sarsgaard, as Lily’s smarmy boss at a Manhattan boat tour company whose every utterance sounds like a come-on. How weird is it to direct your daughter’s husband as he attempts to mount Fanning?  Probably just as weird that Olsen greatly resembles a young Maggie Gyllenhaal—that is, if she had worn Rhoda Morgenstern’s headscarf-heavy wardrobe. Even stranger: Olsen is now engaged to Holbrook.

All in all, "Very Good Girls" is a very bad excuse to subject those of us who have enjoyed Fanning ever since 2001’s "I Am Sam" to seeing her flash her bare fanny, fondle herself provocatively and cavort in her underwear for no dramatic purpose. Yes, she should be allowed to grow up onscreen. But without a story that justifies it, it just feels sad and desperate.

Even sadder? "Little Darlings," as much as I can tell, is still unavailable on DVD. 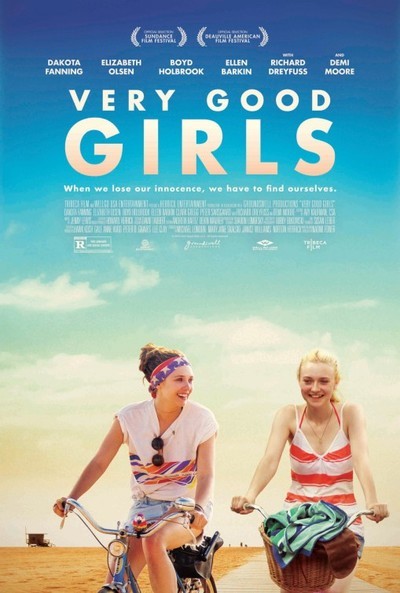