Art is dangerous and those who profit from it are risking their lives in Dan Gilroy’s bloody art-world satire “Velvet Buzzsaw.” Gilroy targets all the players who feed the machine of high-priced art—the pretentious artists, the gallery owners, the agents, the clients, and especially the critics—making the case that the more we commodify art that comes from passionate, even dark places, the more we risk suffering as a consequence. And he does so in what could be called a satire-horror hybrid, playfully poking his art world players for the first half and then unleashing actual violence on them in the second. It’s a wildly inconsistent film, sometimes disappointingly clunky and as superficial as the world it’s mocking, but it’s also an ambitious piece of work with unforgettable imagery and an ace ensemble. You know how a painting can look totally different depending on the angle from which you're viewing it? The same thing is going to happen with “Velvet Buzzsaw,” and I think that’s exactly how Dan Gilroy wants it.

Jake Gyllenhaal is in gloriously showy mode as art critic Morf Vandewalt, a writer who can literally make or break an artist’s career with his buzz-generating reviews. He is a kingmaker in a circle of art profiteers that includes agent Rhodora Haze (Rene Russo) and her assistant Josephina (Zawe Ashton). Almost like a slasher movie director giving us snippets of character for the eventual victims arriving to the remote cabin in the woods, Gilroy populates an ensemble with quirky characters like installment technician Bryson (Billy Magnussen), gallery manager Gretchen (Toni Collette), grown-repetitive artist Piers (John Malkovich), hot-young-agent Jon Dondon (Tom Sturridge), hot-young-artist Damrish (Daveed Diggs), and new assistant Coco (Natalia Dyer). It’s a crowded cast of beautiful people about to have their superficial lives destroyed.

It starts when Josephina comes home to find her upstairs neighbor deceased in the hallway. She peeks into his apartment and finds dozens of gorgeous paintings—and the design of the art is truly fantastic. They’re haunting pieces of work and the movie could have collapsed if they were not. Much of “Velvet Buzzsaw” rises or falls on whether or not the art Josephina finds would believably incite the buying frenzy and fandom that it does, so it’s essential that we believably buy that she’s captivated by the art. She learns that her neighbor was a troubled artist, and he was trying to destroy his life's work when he died. She probably should have taken that as an omen. Instead, Josephina unleashes the art into the world, and all of the aforementioned characters (except maybe Coco) want a piece of the inevitable profit. And then people start dying.

“Velvet Buzzsaw” is a unique horror film visually in that it doesn’t employ the typical dark color pattern or low lighting typical in the genre. It is a bright, vividly colored slice of gore, a pop art riff on “Final Destination” with bright red flames, blood, and paint. The design of the film always kept me engaged, impressed by the visual choices from the paintings to the production design to the costumes to the kill scenes. Almost all of the deaths in “Velvet Buzzsaw” involve characters being absorbed by their art, almost as if Gilroy is saying you can’t be an outsider to true art for very long without getting sucked into it. It was shot by the great Robert Elswit (robbed of an Oscar nod for his work on Gilroy’s “Nightcrawler”) and his work elevates the piece overall. There are striking enough visuals throughout “Velvet Buzzsaw,” and a nice streak of black humor threaded through the entire piece, to keep viewers engaged at least superficially.

The problems start when one starts digging below the surface. It feels like “Velvet Buzzsaw” needed another pass on every level. The script feels clunky at times, uncertain of its targets and willing to go off on tangents that the movie really doesn’t need—there’s a scene between Piers and Dondon that does nothing for the film other than to show John Malkovich can drop a free throw. And I kept hoping for it to coalesce into a statement about art that was deeper than “take it seriously.” There are also some weird, choppy edits, and tonal jumps. It’s an ambitious movie, so a difficult one to manage in terms of structure, but this flick lurches and stops sometimes right when you want it to be building up momentum. It sometimes even approaches “failed experiment” status, but a strong acting choice or design element just brings it back from that precipice a few times. One just wishes it never got so close.

As someone who sees hundreds of movies a year, and covers hundreds of hours of television, I value originality, and “Velvet Buzzsaw” is certainly unlike anything else you’re going to see this year on Netflix or any other streaming service. And so maybe I’m more forgiving of it than people who aren’t subjected to so much predictable mundanity would be. Or maybe, after watching the cautionary tale Morf the cynical critic, I’m just scared something will happen to me if I’m too mean.

This review was filed from the Sundance Film Festival on January 28th, 2019. 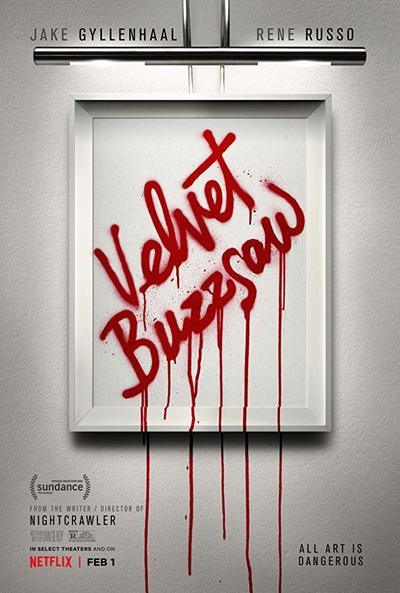