About one in every five new Jackie Chan film is worthwhile, and the Chinese super-spy thriller “Vanguard” is not the one. Rather, it’s the latest expression of Chan’s outspoken nationalism, which isn’t that surprising given that he has repeatedly spoken out against Hong Kong protesters.

In “Vanguard,” Chan plays Huanting Tang, the boss of Vanguard, an international security firm whose problem-solving skills and ass-kicking abilities are repeatedly conflated with their moral authority. Tang and his employees flex their righteous muscles and try to set a good example for (this past) Lunar New Year by protecting misguided accountant Guoli Qin (Jackson Lou) from the Brotherhood of Vengeance, a Middle Eastern terrorist group that Qin reluctantly helped to fund and therefore arm with weapons of mass destruction (“by selling oil and artifacts in Europe”).

The movie’s off-putting and constantly foregrounded political agenda wouldn’t be so unpleasant if the action scenes were more plentiful and/or thrilling. They aren’t, leaving the bulk of “Vanguard” to be carried by impersonal, computer-generated/enhanced stuntwork, Chan’s tough guy talk, and some fine but unremarkable performances from his younger, less charismatic co-leads, Lun Ai and Yang Yang. Chan’s latest star vehicle didn’t need to be anything more than a good work of propaganda, but it’s not even compelling on those terms.

“Vanguard” begins with a playful fight scene, choreographed by semi-regular collaborator Guanhua Han (“Chinese Zodiac,” “Police Story: Lockdown”). Dutiful husband and father Kaixuan (Ai) and faithful bachelor Zhenyu Lei (Yang) stop a mercenary group called the Arctic Wolves (“They’ll do anything for money”) from kidnapping Qin, and delivering him to the Brotherhood of Vengeance. Lei proves himself in a rare moment of endearingly tacky fantasy heroics: “I’m from Vanguard,” he yells before tackling Qin and crashing through a window onto the street several feet below, where a traditional Lion Dance is being performed. From there, Lei is dispatched to Africa to protect Qin’s daughter Fareeda (Ruohan Xuo). Unfortunately, Lei also gets kidnapped by the Brotherhood of Vengeance, which kicks off an elaborate international rescue operation that starts in London’s Trafalgar Square, then heads for the hills of fictional Jiadebala (actually Zambia), and ends up in Dubai’s water fountains.

This sort of chest-thumping, globe-trotting, anti-terrorism adventure is similar to Chan’s own “Kung Fu Yoga,” which is partly set in and advertising for Dubai, as well as jingoistic Chinese action blockbusters like “Wolf Warrior 2” and “Operation Red Sea,” both of which deploy Chinese mercenaries and soldiers to fictional countries in Africa and the Middle East for the sake of deposing fictional terrorist threats. These movies reduce political theater to sock puppet entertainment, which also isn’t that surprising since all new Chinese films require approval from the mainland government.

Some exceptional recent mainland blockbusters work both as popcorn entertainment and propaganda (Hello, “The Wandering Earth”!), but “Vanguard” isn’t one of them. Even if the movie’s action scenes were stronger, they’d still be constantly interrupted by dire, momentum-smothering expository dialogue, like when Arctic Wolves leader Broto (Brahim Chab) asks a subordinate, “What is Vanguard?” and is sadly answered with a Powerpoint presentation’s worth of information (“Their services include security for shipping, and VIP protection”).

Viewers are also constantly reminded that the main difference between Vanguard and the Brotherhood of Vengeance is that Vanguard is Chinese: Jiahua (uncredited in even the movie’s concluding titles), Kaixuan’s son, compares him to Captain China, who is “mightier than Captain America,” while the Arctic Wolves hire African poachers who compare themselves with (computer-generated) hyenas. Also: Tang won’t shake hands with Qin because “Greed is the root of all evils” and “protecting the innocents is our paramount duty.” You don’t ever need to read between the lines to know who “our” is: it’s spelled out, underscored, italicized, and bolded in every other scene.

There are, however, a few moments of joyful spectacle at the start of “Vanguard,” like an early white-water rafting chase featuring an expensive-looking jeep which also doubles as a water-craft with retractable wheels. This gonzo set piece is the exception that proves the rule, generally speaking, though there is a fun “Fast & Furious”-esque car chase later on in Jiadebala featuring a couple of hulking SUVs that rocket off of Zambian cliffs and into a building or two.

Still, the best Jackie Chan-related moment in “Vanguard” has to be when Tang prepares to leap over an indoor mall’s guard rail in order to nab a suspect, a sly wink to fans who know Chan for his famous Christmas lights mall jump in “Police Story.” A fellow security guard stops Tang just in time: “Wait! There's stairs over there.” The rest of “Vanguard” isn’t as enjoyable since it’s more expensive-looking than actually thrilling. Even Chan’s usual behind-the-scenes blooper reel isn’t as fun as it usually is since his presence is often overshadowed by his various stunts’ moving parts. Here’s hoping that Chan will make great stunt work and action choreography his paramount duty in his next movie, which may or may not be the best of his next five. 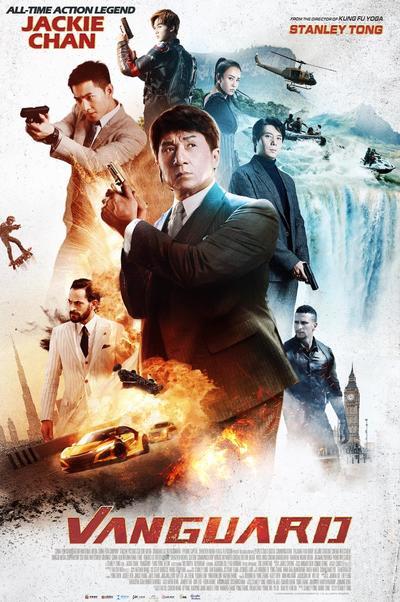 Can Aydin as Silver Fox