Seriously: on opening night, I happily joined a packed Times Square auditorium-full of moviegoers watching this science-fiction adventure, which stars a talented ensemble of of Mandarin-speaking actors trying to stop the Earth from crashing into Jupiter. I left the theater hoping that "The Wandering Earth" would be one of this year's Chinese New Year's hits. It grossed $300 million in China during its opening week alone, a hopeful sign that we'll see more entertainment as assured as this.

The setup might seem familiar at first. Two teams of astronauts fight to save the Earth years after its leaders transformed it into a planet-sized spaceship to escape destruction by an overactive sun. The first team is a two-man skeleton crew: the square-jawed Peiqiang Liu (Jing Wu) and his Russian cosmonaut buddy Makarov (Arkady Sharogradsky). The other is a small exploratory group led by Peiqiang's feisty twentysomething son Qi Liu (Chuxio Qu) and his upbeat partner Duoduo Han (Jinmai Zhao). These factions respectively spend most of their time battling MOSS, an unhelpful computer in a remote space station; and exploring an ice-covered Earth in stolen all-terrain vehicles (some of which bring to mind "Total Recall," specifically the tank-sized drill-cars).

But while director Frant Gwo and his writing team blend Cixin Liu's source novel with elements from American-made sci-fi disaster films—including "Armageddon," "The Day After Tomorrow," and "Sunshine"—they synthesize them in a visually dynamic, emotionally engaging way that sets the project apart from its Western cousins, and marks it as a great and uniquely Chinese science fiction film.

For one thing, rather than build the tale around a lone hero ringed by supporting players, "The Wandering Earth" distributes bravery generously amid an ensemble that includes action hero Wu; rising stars Qu and Zhao; and comedy institution Man-Tat Ng, who plays a grey-bearded spaceman named Zi'ang Ha. The script, credited to a team of six, never valorizes a singular chest-puffing hero, nor does it scapegoat a mustache-twirling antagonist (not even MOSS, the sentient, HAL-9000-style computer program in the space station).

The teamwork theme is cross-generational, too. Both Peiqiang and Ng (formerly the straight man to film comedy superstar Stephen Chow) are treated with reverence because they're older, and are therefore presumed to have more experience and stronger moral fiber. The veterans work well with the film's younger astronauts, whose optimism makes them as brazen as they are idealistic.

This apolitical blockbuster about a post-climate-change disaster extends its belief in teamwork to the rest of the international community. The movie is filled with narrative diversions that reassure viewers that no single country's leaders are smarter, more responsible, or more capable than the rest—except, of course, for the Chinese.

Second, "The Wandering Earth" looks better than most American special-effects spectaculars because it gives you breathing space to admire landscape shots of a dystopian Earth that suggest old fashioned matte-paintings on steroids. Although Gwo and his team realized their expensive-looking vision with the help of a handful of visual effects studios, including the Weta Workshop, they have somehow blended their many influences in bold, stylish ways that only Hollywood filmmakers like James Cameron and Steven Spielberg have previously managed.

Third, the film's creators breathe new life into hackneyed tropes. Gwo and his team take a little extra time to show off the laser beams, steering wheels, and hydraulic joints on their space cars and exoskeleton suits, to make the gear seem unique. And the storytelling goes extra mile to show viewers the emotional stress and natural obstacles that the characters must overcome while solving scientifically credible dilemmas (all vetted by the Chinese Academy of Sciences). This movie may not be the next "2001: A Space Odyssey," but it's everything "2010: The Year We Make Contact" should have been (and I like "2010," a lot).

A week after seeing "The Wandering Earth," I'm still marveling at how good it is. I can't think of another recent computer-graphics-driven blockbuster that left me feeling this giddy because of its creators' can-do spirit and consummate attention to detail. The future is here, and it is nerve-wracking, gorgeous, and Chinese. 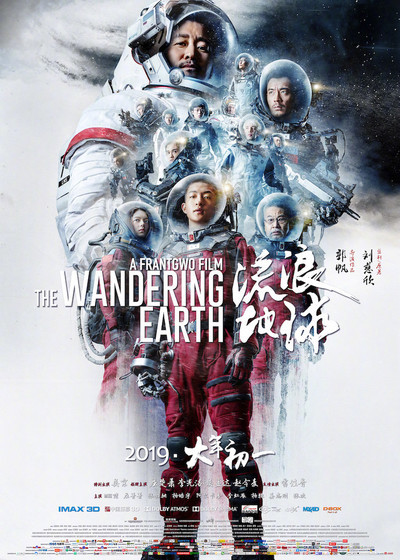