I'm torn: should I laugh or yell at the lousy anti-internet horror film "Unfriended: Dark Web?"

Like its 2014 predecessor, "Unfriended: Dark Web" is a deeply misanthropic horror film that follows a group of hapless Millennials—through realistic-looking video footage of their computer screens—as they are cyber-terrorized by a mysterious group of internet trolls/killers. The biggest difference between the two films is that "Unfriended" is dynamic and cruel while "Unfriended: Dark Web" is unbelievably stupid and sadistic. Neither movie is especially smart or incisive about the Way We Live Now, but they don't really have to be.

Still, "Unfriended" works because its creators capably lead viewers around by the nose. "Unfriended: Dark Web" doesn't because its makers have a bunch of ideas, but fail to synthesize them in any meaningful way. The result is an unbelievable social critique built on the back of a Rube Goldberg-esque series of unbelievable, cruel plot twists that will make even the most credulous moviegoer roll their eyes in disbelief. Maybe future viewers will get a kick out of this film's campy depiction of a vast internet-enabled conspiracy that's foisted onto Matias (Colin Woodell), his deaf girlfriend Amaya (Stephanie Nogueras), and their pals after Matias acquires a mysterious used laptop. But today—when most viewers probably don't know or care what the "dark web" is—"Unfriended: Dark Web" looks pretty desperate.

Matias ignores several big, bold warning signs, like the portentous screen names of his stalkers (they all call themselves "Charon," which prompts a hilariously insipid Wikipedia search for information on the Greek underworld's ferryman). One anonymous interlocutor has an unsettling request: he wants Matias to "trephine" a girl (another Wiki-explanation: "trephining" is when you drill a hole into a human skull). Also, all of Matias' adversaries communicate using a shady private chat room called "The River" that looks like torch-lit sewer canal from the similarly crude and gory "Doom" computer games. What year is this, and how slow is the dial-up modem?

By now, you've probably figured out that Matias is the kind of dumb-dumb horror movie protagonist whose contrived behavior only makes sense as a means of pushing along his obnoxious story. Each new plot development is so slapdash and uninspired that it's impossible to suspend one's disbelief. I can't even tell if the baddies' use of a make-shift sound board and a well-timed van (yes, it's just a regular, gas-fueled van) are supposed to be funny, or are just unintentionally lame. I'm leaning towards the latter since it's impossible to take seriously a movie where a sassy but defenseless deaf girl is repeatedly imperiled by a faceless internet-enabled killer who uses a goofy-sounding hacking tool to send all-caps chat room threats to his victims (a distorted chiming noise can be heard every time the evil hacker contacts Matias; it sounds like the hacker's cell phone is ringing while he's accidentally flushing it down the toilet).

The illogical nature of these generic plot twists would be forgivable if watching "Unfriended: Dark Web" wasn't such a punishing and unrewarding experience. Matias toggles between various windows and tabs, but is frequently interrupted by strange women, malicious computer dweebs, and pesky friends. His interactions are therefore mostly of the "What do you want me to do now" or "We can't do Y, or X will happen" variety. And every new conversation only further trips up Matias and his friends, none of whom exhibit enough technological know-how or emotional maturity to make them worth rooting for.

And because "Unfriended: Dark Web" stinks on a basic storytelling level, it's impossible to take seriously as a low-brow cultural critique. In this film, our primary source of human contact is a group of cartoonishly naive Millennials. Is their blinkered naïveté supposed to reflect social media users' deep-rooted alienation? Sure, let's go with that.

Honestly, it's hard to appreciate being chastised for willingly giving away so much personal information online—and for being so short-sighted about the "private" nature of our online interactions—when the film's protagonists are too dumb to fight back against big bad social media boogeymen who use Photoshop and word processing tools to entrap our heroes. The internet may be a nightmare, but it's a whole lot scarier than anything in "Unfriended: Dark Web." 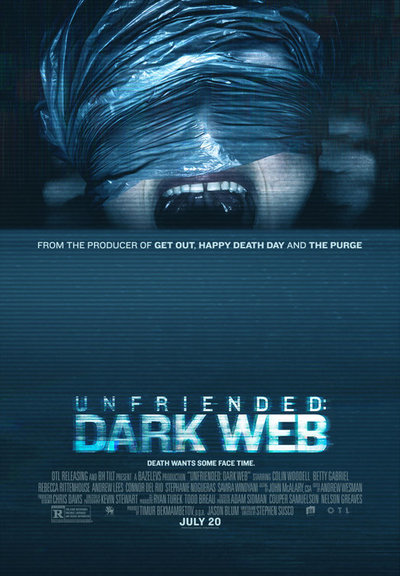 Rated R for some disturbing violence, language and sexual references.