Total silence is rare in "Under the Shadow." There is the wind, sometimes a whisper, sometimes a roar. Radio stations blare shouted speeches and chanting crowds. Calls to prayer echo. Air-raid sirens scream. Loudspeakers in the hallways of the college campus blare anthemic music. Even benign sounds—a toaster, a phone ringing, the music in a Jane Fonda workout video—occur at a jarring decibel level. When the background noise drops out, the silence is deafening. Something terrible is happening. The chaos in the outside world infiltrates the interior. "Under the Shadow," a Farsi-language debut feature written and directed by Babak Anvari, creates a world where reality itself is suspect. In a year filled with great first features, add "Under the Shadow" to the list.

Taking place in 1988 Tehran, during the "war of the cities" phase of the nearly decade long Iran-Iraq war, "Under the Shadow" is the story of Shideh (Narges Rashidi) and Dorsa (Avin Manshadi), a mother and daughter holed up in their apartment, withstanding the missile bombardment. As the attacks increase in frequency, the city empties of people. Shideh and Dorsa remain, at first because Shideh is stubborn, and feeling bullied by her absent husband's demands (over static-crackling phone calls from one of the war fronts where he is stationed) that she go stay with his parents. Shideh refuses, taping X's on the windows, hustling Dorsa into the basement during air raids, pulling out her illegal VCR to do Jane Fonda workouts (after closing the curtains).

There are signs early on that all is not entirely well. Shideh has a history of sleepwalking. Dorsa has night terrors. When Shideh is expelled from her medical school for political activity during the Revolution, her husband Iraj (Bobby Naderi) is sympathetic but also says, "Maybe it's for the best." There is simmering resentment in the marriage, exacerbated by the instituting of laws requiring chadors worn in the street and a hemming-in of women's mobility. Those laws have infiltrated personal relationships, highlighting fissures in the home that may have already been there.

The atmosphere in the apartment building among the residents is one of whispered rumors, suspicion of one another, belief in portents of doom. An orphan child living with the landlord informs Dorsa that the building is haunted by a djinn. The landlord's wife believes in djinn, telling Shideh: "They travel on the wind, moving from place to place until they find someone to possess." Djinn are most active "where there is fear and anxiety," according to banned Iranian writer Gholam-Hossein Sa’edi, whose book Shideh reads, looking for answers. Shideh tells Dorsa repeatedly there is no such thing as a djinn but slowly, over time, Shideh begins to doubt herself. Things disappear. Dorsa's beloved doll vanishes. Shideh's beloved Jane Fonda tape ends up in the garbage. Shideh's medical textbook, locked in a cabinet, somehow ends up in another apartment. When Shideh finally decides that it's time to go to Iraj's parents, Dorsa refuses to leave until her doll is found. Dorsa develops a fever. And then things get really weird.

Babak Anvari moves "Under the Shadow" from realism into horror almost imperceptibly. It is impossible to know what is real and what is not, what is a result of Shideh's exhaustion and what is a valid response to living in a war zone. Cinematographer Kit Fraser, who also shot Anvari's short films "Solitary" and "Two & Two" (the latter nominated for a BAFTA) starts with a naturalistic style and then shifts, the apartment becoming a manifestation of its trapped inhabitants' psyches. Cracks in the ceiling exaggerate themselves overnight. The concrete steps to the basement stretch down into darkness like a disorienting Escher woodcut. The tarp held down over the hole in the roof from the intrusion of an unexploded missile snaps in the wind like a sentient being.

While "Under the Shadow" has much in common with "The Babadook," especially in its portrayal of shared sleep-deprivation in mother and child as well as an interior that morphs into a nightmarescape before our eyes, it is also reminiscent of Roman Polanski's "Repulsion," where grasping arms emerge from hallway walls suddenly, soft like clay, and gigantic cracks shiver across walls and ceiling. The building in "Under the Shadow" swallows up dolls and people and textbooks and VHS tapes. It's filled with the sounds of knocking and rattling, far-away shrieks and moans (Alex Joseph's sound design is superb). You can take all of this at face value, or you can take it as a metaphor for the destruction outside those walls, from the war, from the Revolution before it. It works either way.

The trauma of war and societal upheaval is rendered human-sized in "Under the Shadow," even with the paranormal elements. Anvari is Iranian-born, with childhood memories of the Revolution and the years following. "Under the Shadow" is clearly a personal film, and Anvari has assembled an extremely talented team to make that a reality. Production designer Nasser Zoubi and set decorator Karim Kheir create the period gently, without a hint of nostalgic fetishism. The visual effects are sparingly used but truly spooky, and there are many spine-chilling scream-worthy moments.

The two leads, Rashidi and Manshadi, create a relationship prickling with tension and impatience, exploding into mutual rage and suspicion. It is amazing to consider that this is Manshadi's debut. When she digs her heels in, she really digs her heels in. Her eyes squint with hostility when she looks at her mother tearing apart a bedroom looking for the missing doll. Dorsa sees things her mother cannot. She speaks to entities that are not there. She believes. Rashidi's visceral performance is meticulously structured in its emotional progression, although the end result does not feel "structured" at all. What we see is a woman losing her mind. The cracks in the ceiling open ... what will come through? Can it be kept out? Will the solid ever be solid again? There is no escape, for characters or audience. "Under the Shadow" is unnerving in the extreme. 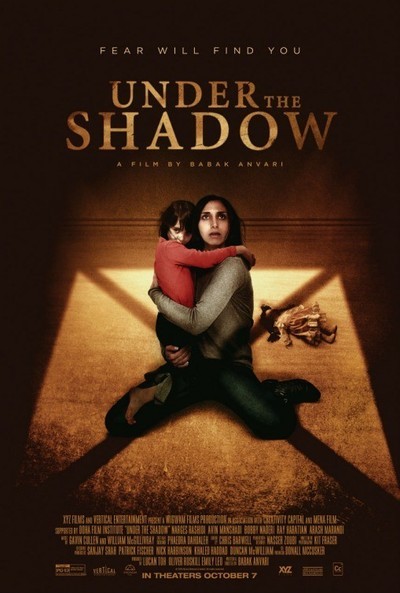