Films like “Unbroken,” and the Laura Hillenbrand book on which it’s based, capture something we all hope is true about ourselves—that we too are unbreakable. That when faced with horrendous, life-threatening situations, we would respond in similar fashion to Louis Zamperini, finding a new well of courage within ourselves and surviving the unimaginable. It is the resilience of the human spirit that has drawn us to films based on true stories again and again to experience pain and triumph in the relative comfort of a movie theater seat.

“Unbroken” opens with a powerfully staged and shot sequence of aerial combat that surprisingly defines the film's strengths and weaknesses over the next two-plus hours. The attention to detail as Zamperini (Jack O’Connell), Russell ‘Phil’ Phillips (Domhnall Gleeson) and Hugh ‘Cup’ Cuppernell (Jai Courtney) spin their plane around and take aim at the enemy feels accurate. There’s a weight to the gunfire and a fragility to the aircraft itself that conveys that these people were always a more-accurate gunsight away from tragedy. And yet there’s something wrong here too. The sunset on the horizon looks like a painting. The clouds are perfectly placed for visual impact. The little drop of blood on Zamperini’s forehead can’t hide his movie star looks or movie star make-up. Everything feels accurate in its staging, and yet also not quite genuine. It's Hollywood, old-fashioned movie accurate. And despite O’Connell’s instant charisma (the guy is going to be a MASSIVE star), this feeling never leaves “Unbroken”—the sense that we’re watching human suffering that looks too pretty and too refined to convey its intended impact.

Louis Zamperini should have become a household name for his athletic ability. The “Torrance Tornado” was a US Olympic athlete whose career was cut short when he joined World War II as a bombardier. Even in country, Zamperini is seen training, pushing himself right at the moment that most people would give up. He is the kind of runner who hangs back, and only makes his move when everyone has reached the point of exhaustion. Of course, this is a character trait that will serve him well during the nightmare he’s about to endure.

Zamperini and two other men, including Phil, survive a plane crash in the middle of the Pacific Ocean. They barely make it long enough to board a raft, where the conditions of hunger, dehydration and heat exhaustion take their toll. These scenes are remarkably well-staged and executed by director Angelina Jolie and her team. They’re the best in the film, the moments in which we can feel Zamperini’s increasing desperation and likely death. They have a focus, fragility and purpose that the second half of the film lacks.

That begins when Zamperini is captured after 47 days adrift, and forced into horrific conditions and hard labor in Japanese Prisoner of War camps. Here, Jolie simply fails to convey the danger and what’s truly at stake. “Unbroken” starts to go through the motions of history recreation instead of real character drama, and while I have loved Roger Deakins’ work in the past, it’s too “pretty” here, covering every shot in that vague beige of WWII memory, which never allows us to put ourselves in Zamperini’s speedy shoes. If we can’t feel the urgency of his plight, we won’t have the same emotional response to it as we would with more blood, more dirt, and just more danger. It becomes something we watch instead of something we experience. There's a difference.

The relative disappointment of “Unbroken” has nothing to do with Jack O’Connell, a truly gifted actor who has emerged as a fully-formed movie star with this, his even better work in “Starred Up,” and next year’s great “’71.” He may not be a household name yet. He will be. In fact, he’s so good that one wishes Jolie asked more of him. Gleeson also deserves praise for taking a smaller role and making it memorable. He too is an actor really worth watching. “Unbroken” could be a film that we look back on as an early entry in the careers of major stars.

Because the disappointing thing is we won’t really look back at the film itself on its own merits. It’s one of those inspirational Hollywood dramas about which there isn’t anything "overtly wrong" with it. It’s well-cast, it looks great, it has that intense centerpiece in the raft, and it certainly conveys a true story worth telling. And yet I keep coming back to that beautiful sunrise that opens the film. It’s just too damn pretty. 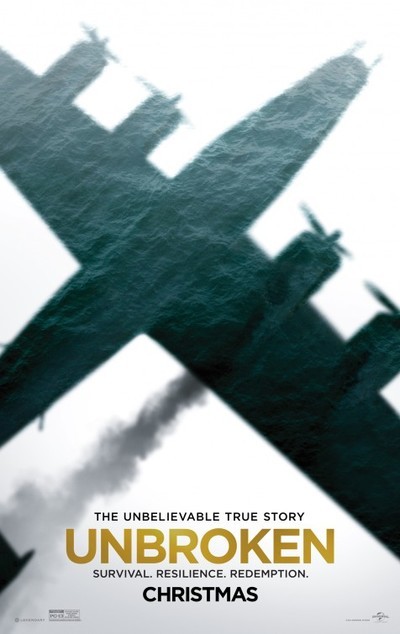 Rated PG-13 for war violence including intense sequences of brutality, and for brief language

John Magaro as Frank A. Tinker