TV has been tough this year. Reflecting the times we’re in, a lot of the limited series of 2019 have tackled serious, depressing subject matter from HBO’s “Chernobyl” to Netflix’s “When They See Us,” two of the absolute best. One of the most difficult watches I’ve had this year is Netflix’s “Unbelievable,” an experience that brought me to tears on multiple occasions. And yet there’s an underlying bed of hope in “Unbelievable”—the hope that there are people out there striving to do what’s right, to pick up people when they’ve fallen and to correct injustice. It’s a tough watch, but it’s a rewarding one, not just because it has one of the best ensembles of the year but because of what it says about hope and empathy.

The first hour of “Unbelievable” is its most challenging. We meet Marie Adler (Kaitlyn Dever) on the worst day of her life, speaking to the police after being raped early that morning. As she slept, someone broke into Marie’s apartment, tied her up, and raped her for hours. She’s clearly deeply traumatized, and Dever is phenomenal at capturing Marie’s deep pain without ever resorting to melodrama, but that trauma is amplified by the way the responding authorities handle the case. First, they basically make her tell her story over and over and over again to different branches of the investigation. It’s entirely unsurprising then when details start to get blurry, but this leads the officers to question Marie’s story altogether. When it’s revealed that Marie comes from a tragic background of abuse—which is used to suggest former trauma may cause her to make up a story here for attention—and when her foster parents and friends have no idea how to help her, Marie is basically painted as a liar. She is forced into a false confession that she made the whole thing up. We know she didn’t. It’s a stunning hour of television in the way it captures how someone could be emotionally bullied into saying something untrue. If you’ve ever wondered how someone could make a false confession, watch the first hour of “Unbelievable.”

And then everyone in an authority position should be forced to watch the second hour. It opens with another rape investigation, this time of a woman named Amber played by Danielle Macdonald. But the responding officer in this situation is an empathetic woman named Karen Duvall (Merritt Wever). Listen to the way she modulates her voice and tries to make the victim comfortable. It’s clearly designed as a contrast to the opening scenes of the series premiere, in which men pushed for facts and details and ignored the emotional temperature of the situation. Duvall never ignores the trauma and the human being in favor of the evidence. It’s a night-and-day difference in approach that not only details how empathy needs to be a part of any investigation, but how it’s the only way to really solve a crime. If a victim feels traumatized again by the authorities then no one wins.

Duvall’s investigation into Amber’s rape brings in another officer named Grace Rasmussen (Toni Collette), who is a very different personality to Karen. Whereas Karen is openly religious and tender, Grace is more of the “bad cop” archetype, although the writers of “Unbelievable,” including Oscar nominee Susannah Grant (“Erin Brockovich”) are very careful not to overplay the oil-and-water buddy copy trope. These two are very different but they realize they both have the same goal—stop this monster from committing more crimes. The midsection of “Unbelievable” is very rewardingly procedural, revealing how Grace and Karen’s team work a case, including searching security footage for suspicious vehicles and even scouring porn sites for potential photos of the victims.

Throughout the season, we intercut between the investigation and the fallout from Marie’s rape and the subsequent charges of making a false claim. Her life is basically destroyed, but we know something she doesn’t: that there are dedicated people working to find the man who raped her. They don’t even know she’s a victim. Her case was closed when the cops decided it wasn’t true. But we know. Dever is stunningly good at capturing how Marie is hardened by the whole experience without resorting to a single scene that feels maudlin or manipulative. The structure of “Unbelievable” is incredible in the way it allows us to carry the hope for Marie that the world has denied her.

Some of the dialogue between Karen and Grace can be a bit superficial and clichéd, but it’s a TV sin that’s easy to forgive given how much the actors bring to the roles. For every line that Collette delivers that sounds a bit regrettably over-written, there’s a choice she makes as an actress that re-balances the scales. And as spectacular as Collette and Dever are here, it’s really Wever’s show. She never strikes a false note, and makes choices that other lesser actors would never consider. All three avoid the melodrama—and much credit to director Lisa Cholodenko (“The Kids Are All Right”) for that tonal tightrope walk too, of course—but it’s Wever who mesmerized me. There’s something so rich and dense about the choices she makes as an actress. It’s one of the best performances on TV this year.

As national anxiety seems to rise and women’s rights dominate the headlines, I wouldn’t expect our television to become sunshine and puppy dogs any time soon. It makes sense that the most acclaimed TV this year has been dark (heck, even one of our most acclaimed comedies, “Barry,” is about murder). And there will be people who can’t get through even the first hour of “Unbelievable.” I don’t blame them. But I encourage everyone to try. The success of the crime show genre over the last two decades or so in shows like “CSI” and “Criminal Minds” has created an emphasis on details like DNA and profiling, but “Unbelievable” reminds us of the human side of criminal investigation on both sides. 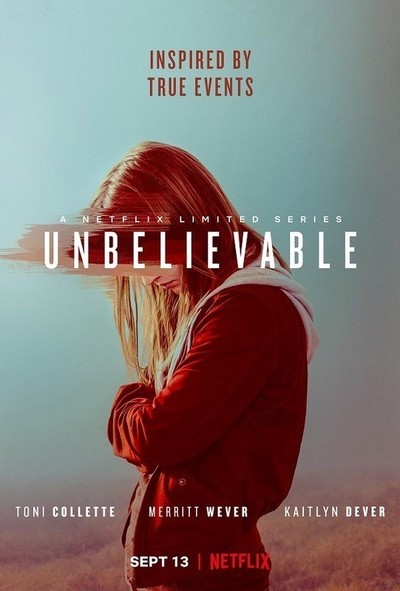