So bad, the temptation is to laugh

"Tyler Perry's Temptation" is ostensibly a serious-minded offering from the one-man filmmaking empire — it contains nothing in the way of broad slapstick and his infamous Madea character is nowhere to be seen — but you wouldn't know that based on the reaction that it got from the audience that I saw it with. Even though they were presumably there because of a genuine interest in seeing it and not simply out of professional obligation, the combination of shameless melodramatics and ham-fisted moralizing inspired more laughs from that audience than most straightforward comedies of recent vintage.

I can't say that I blame them because the film is flat-out ludicrous from beginning to end. And while it might not be Perry's most excruciating cinematic effort date — especially not in a world where "Madea Goes to Jail" is allowed to exist — it is definitely wretched enough to be in the running for that dishonor.

Our heroine is Judith (Jurnee Smollett-Bell), a nice young country girl who marries childhood sweetheart Brice (Lance Gross) and moves away with him to the big, bad world of Washington, D.C., with the dream of one day becoming a marriage counsellor. For the time being, she is working for a high-end dating service and has designed a compatibility quiz that, to hear everyone talk about it, is perhaps the single most revolutionary document to come along in the personal relationship industry since the legendary Massey Pre-Nup.

This questionnaire catches the interest of Harley (Robbie Jones), a potential new client for the firm who is described as "the third biggest social media inventor since Zuckerberg." He asks Judith to use her insight into the human condition to help put together a software program with the power of a thousand "Cosmo" quizzes. Oh yeah, Harley is also filthy rich and extra-hunky and before long, it becomes clear that his interest in Judith is more than professional, especially when he learn that Brice is the only man she has ever been with.

At first, Judith declines his suave advances — she loves her husband and, as for that other stuff, "I watch HBO — I know I'm not missing anything" — but his charms eventually begin to win her over, especially when it becomes clear that Brice is taking her for granted and no longer pays her the attention she deserves. Finally, while on a business trip to New Orleans, Harley takes advantage of her and afterwards she vows never to see him again, while perhaps silently promising herself to add Cinemax to her cable package.

But, of course, she can't get enough of him, so she embarks on the inevitable downward spiral of sex, drugs and wild parties, most of which are conveyed largely by osmosis in order to conform to the parameters of the PG-13 rating. Both Brice and her mother (Ella Joyce), a preacher with a few dark secrets of her own, try to rescue her from what her mother considers to be Harley's satanic influence but it is to no avail.

It all leads, as such plotlines must, to an over-the-top conclusion in which the good are rewarded, the evil are punished and lines like, "He's gonna take you straight to Hell," are delivered in the most hilariously histrionic manner possible. At times it seems that Judith might benefit more from an exorcist than a couples therapist.

There are some good actors on hand — remember Jurnee Smollett-Bell from her extraordinary performance as the little girl at the center of "Eve's Bayou" (1997)? — but you wouldn't know that from the terrible work Perry elicits from them. (As Judith's boss, Vanessa Williams delivers a French accent so dubious that Chico Marx might have questioned its veracity.) Then there is Kim Kardashian, who turns up in a supporting role as one of Judith's co-workers. She is hardly the worst thing in the film but it is perhaps ironic that someone so famous for her curves could deliver her lines so flatly.

While Tyler Perry is to be admired for creating an enormously successful cinematic cottage industry catering primarily to an underserved segment of the moviegoing public, the trouble with him is that he is a terrible filmmaker and even though his output is prolific enough to make Steven Soderbergh seem lazy by comparison, he seems to be regressing with each effort. With the exception of "For Colored Girls" (2010), which was not a very good movie but which at least demonstrated a recognizable streak of artistic ambition, his films are hopelessly amateurish affairs in which the only apparent direction for every aspect of the production — screenplay, performances, even establishing shots — seems to be, "Louder, Broader!"

On stage, where most of his productions (including this one) were initially produced, this approach can work because performances need to be bigger in order to be seen and heard. Film, on the other hand, is more intimate, but Perry is still straining to reach the cheap seats. In this case, the results are so grotesque that I found myself recoiling at the too-muchness of what I was witnessing. Imagine Ken Russell without the subtlety and quiet dignity (not to mention the talent) and you have Perry's directorial approach in an exceptionally hacky nutshell.

Even if Perry had toned things down a notch or 12, it probably would not have helped matters much because "Temptation" is one of those movies in which absolutely nothing works except as camp. "Tyler Perry's Temptation" is an awful, awful film and while it is easy to mock and dismiss, it is also kind of a shame to behold.

Perry does have a knack for connecting with audiences in ways that most filmmakers can only aspire to and to see him waste that ability on junk like this is sad. According to IMDb, Perry's next film will be "A Madea Christmas," a holiday extravaganza that will pair his Madea character with the equally off-putting Larry the Cable Guy. And yet, as dreadful as that sounds, "Temptation" is so bad that it could actually turn out to be as Perry's cinematic high-water mark for the year. 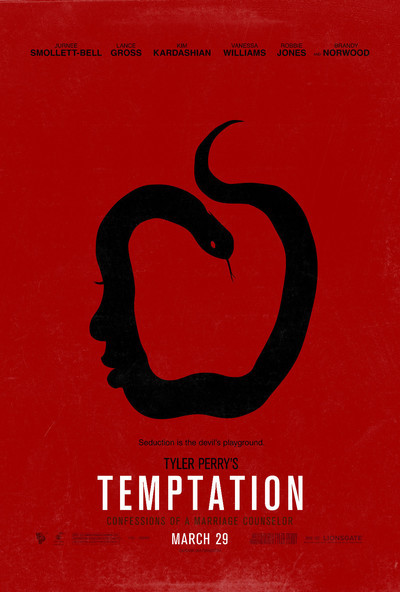 Rated PG-13 for some violence, sexuality and drug content