If Wes Anderson were to mesh “Bad News Bears” with a live-action “Monsters University,” the result would look and feel something like “Troop Zero,” a whimsical, if not generic kiddie adventure more suited for young ones than grown-ups. Led by Mckenna Grace—the remarkable young actor of “I, Tonya” and “Gifted” and directed by a female duo named Bert & Bertie, it’s a syrupy escapade of misfits set in a quaint Georgia town in 1977. Pleasant enough but never quite as emotionally gripping as a coming-of-age story about acceptance can be, “Troop Zero” scores a handful of memorable moments when it lets its freak flag fly; exactly the kind of attitude it encourages in its central children (or among young audience members) who struggle to fit in.

Chief of those kids here is the fancifully named, disarmingly sweet nine-year-old Christmas Flint (Grace), a starry-eyed, messy-haired girl obsessed with the outer space and bullied by cooler packs that cruelly call her a bed-wetter. An avid reader of astronomy books she borrows from the local library, Christmas clutches on to her flashlight (her most valuable possession she’s inherited from her deceased mother) nightly and signals to the sky, hoping to communicate with extraterrestrial life some day. (Sure, “the recluse kid vs. aliens she’d like to befriend” is a touch “E.T.,” or a touch on-the-nose as a metaphor, but go along with it.) With her neighbor and closest (or perhaps, only) friend Joseph (Charlie Shotwell), another outcast frequently picked on by the meanies who ridicule his showy mannerisms, Christmas spends her days looking up to her down-on-his-luck lawyer dad’s work associate Rayleen (Viola Davis, infusing the film with a level of maturity) almost as a motherly figure, dreaming of a future where she’ll get to connect with creatures from afar.

Opportunity comes knocking one day with NASA’s Voyager Golden Records initiative, phonographs launched into the space in ’77 with sound and imagery contributions from a diverse group of regular earth-bound folk. With a spring in her step, Christmas decides to enter a contest to become one of the voices on it. The only trouble is: she is not a part of the Birdie Scouts, where the space program would hand-pick candidates from. So she does what every determined person her age would do and starts her own scouting crew. The members she manages to gather around prove to be very much like her and Joseph; outsiders who unite around a common purpose, with Rayleen unwittingly piloting the tribe to earn the necessary merit badges and claim legitimacy.

“Beasts of the Southern Wild” writer Lucy Alibar’s script moves along rather predictably, with seasoned scouts on the other side of the aisle putting our little dreamers through hell and each group engaging in vibrant tasks, facing one another off through a series of lively montages. (One nod to “Reservoir Dogs” especially earns our giggles despite being overused in cinema.) Meanwhile Rayleen seems to have her own bone to pick with the opponent team’s haughty leader Miss Massey (Allison Janney)—it’s an entertaining rivalry that begs to be further developed.

In the end though, this is the kids' show and they do put one on, however exceedingly quirky it might be. And you can’t help but root for them, even when you well know the lessons they’ll be taught by the end (e.g. what counts is team spirit and friendship, not winning) and the tidy bow that will eventually be tied around this cutesy (and elaborately-costumed) film. But don’t be surprised if the “Little Miss Sunshine”-esque finale of “Troop Zero” gets you unexpectedly choked up with the most appropriate David Bowie needle-drop imaginable (take a wild guess), as the kids accidentally form a sense of solidarity in real time, their earthly oddities be damned. 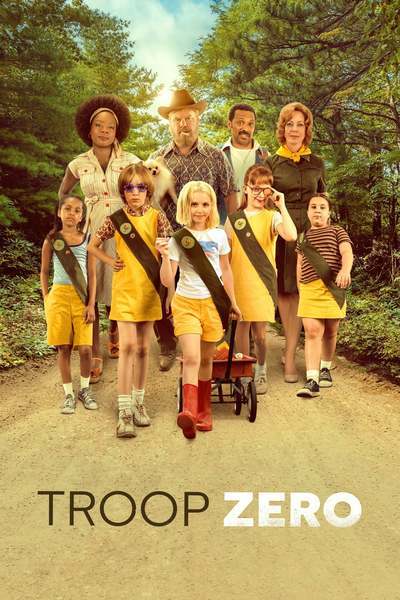 Rated PG for thematic elements, language, and smoking throughout.