This might sound like a typically cynical movie-reviewer thing to say, but the most surprising thing about “Gifted” is that it’s any good at all. That is, if you are going by its premise alone. The movie, from an original screenplay by Tom Flynn (a cursory glance at whose filmography does not inspire rock-solid confidence), is about a very cute young girl enrolling in first grade, much against her will, because as it happens she’s an utter math whiz who prefers being home-schooled by her uncle Frank. Ensuing complications include a grandmother who feels the prodigy will be better off somewhere outside of Frank’s grungy Florida shack.

The setup sounds like “Rainman Annie” or something. But even the most high-concept movie is execution-dependent, and the execution here is far better than the premise leads one to expect. And as executed, the premise plays rather differently—more of a “Kramer vs. Kramer” meets “Little Man Tate” vibe. In the middle of the proceedings, my jaw almost dropped: “This is a child-custody … what’s the word … melodrama!!!” And I don’t say melodrama like it’s a bad thing. The world could use more of them these days as far as I’m concerned.

If “Gifted” works for you as it did me, it’s mostly because of the cast, but also the way the story unpeels. Chris Evans is at his most effectively Evans-y in the role of Frank, who leads a mystifyingly quasi-carefree life repairing boats and looking after extremely adorable Mary (Mckenna Grace). On the opening day of school, he tells the little girl he’s made her a “special” breakfast, and it’s soon revealed he means a bowl of Special K. The two have a good bantering style as he explains to her why it’s a good idea to break away from home-schooling and join grade one. “You’re gonna meet kids today you can borrow money from for the rest of your life,” he tells her. As soon as Mary’s on the bus, Frank’s neighbor Roberta (Octavia Spencer, playing a role she must be pretty used to by now, but which she nevertheless does not phone in, and good for her, and the movie) comes by to tell him that by insisting on sending her to public school, he’s all but sealed Mary’s doom. Why would that be?

The answer comes soon enough, as Mary amazes her kind but befuddled teacher Bonnie with her math-problem-solving stills. Mary’s gift, her boredom in class, and her passion for justice—soon after day one, she clobbers a bully—and more bring her to the attention of the school principal (Elizabeth Marvel). Said principal insists a public school is not the place for Mary, but Frank insists that it is. One hates to side with the principal, but she’s right. On the other hand, there’s something about Frank that strongly suggests that as right as the principal is, he’s more not wrong.

The movie does not go out of its way to entirely vindicate Frank … not even when Mary’s grandmother comes swooping down from Boston. Played with poise and reserve by Lindsay Duncan, she’s an initially mysterious figure—a woman of wealth from whom Frank has removed himself in so many ways that it’s hard to accept them as related at all, at least at first. While Flynn’s back-story scenario is probably likely to seem very silly if examined under a harsh “plausibles” microscope, Mark Webb’s smooth and assured direction, along with the performances of Evans and Duncan, make the unpacking of the relationship both narratively intriguing and emotionally credible, at least for the time that you’re watching them. Which is largely what counts.

What follows is a custody battle where the adult players remain very civilized to each other throughout. Even though Mary herself is freaking at the possibility of being separated from Frank. Their bond remains interesting and funny throughout, as their conversations exploit but don’t oversell Mary’s precociousness. “Is there a God?” she asks Frank during one of their conversations. “I don’t know,” he says, trying to be earnest and honest. “Just tell me,” she eyerolls. The movie consistently serves up funny morsels like this.

Also figuring in the eventually heart-tugging proceedings is a one-eyed cat named Fred. And a potentially awkward, among other things, romance between Frank and Bonnie. Evans and Bonnie’s portrayer, Jenny Slate, met while making this movie and dated in real life for some time after it wrapped. They have real chemistry on screen, and despite the online chatter rejoicing in the disparity of a superhero actor and an ostensibly down-and-dirty comedienne romancing in real life, they don’t play here as any kind of odd couple, but rather as a solid and likable one.

The movie overplays its hand at times, as when Frank brings Roberta and Mary to visit a hospital maternity ward for … well, a reason that doesn’t quite make it. But “Gifted” is on balance a good-hearted entertainment that manages its plot curveballs, and everything else, with a show of compassion that’s a kind of tonic for our Increasingly Strident Times. 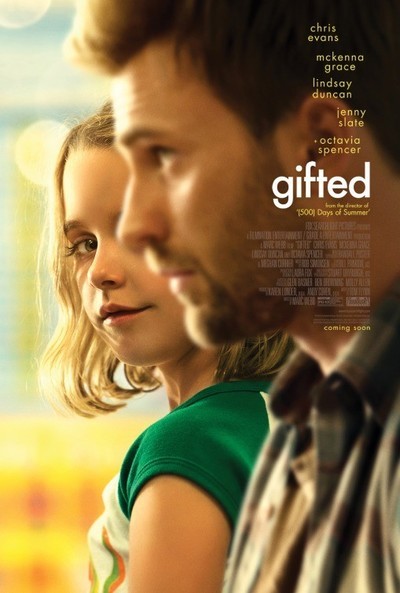 Rated PG-13 for thematic elements, language and some suggestive material.