Ruben Östlund’s “Triangle of Sadness” has become one of the more divisive Palme d’Or winners in years. On one side, there are those who think its underlined themes and obvious targets are a bit unrefined and obvious. On the other, there are people who would argue those targets deserve a skewering and the writer/director of “Force Majeure” and “The Square” uses his wit to do so with hysterical precision. Given this cinematic cruise almost runs as long as a “three-hour tour,” it's easy to see both sides of this debate. There are undeniably sharp dialogue exchanges and entertaining storytelling twists in Östlund’s takedown of the shallow elite, and yet some of it, especially in the final act, all starts to feel redundant, and maybe even as superficial as the uber-wealthy that the film seeks to tear down. Still, if “Triangle of Sadness” falls short of greatness, it lives comfortably on the tier of goodness, even as it unpacks such bad, bad behavior.

Of course, “Triangle of Sadness” tells a three-act story, the first of which might actually be my favorite. A short film of its own, it introduces us to two dating models, Carl (Harris Dickinson) and Yaya (Charlbi Dean) at the end of a fancy dinner. The bill has sat there for long enough to make Carl realize that his girlfriend has no intention of paying, even though she said last night she would do so. The two argue about her gender-based assumptions and Östlund’s dialogue spins and swirls as the discussion goes back to the hotel that Yaya notes she’s covering for Carl. This is a very promising prologue for “Triangle of Sadness,” an implication that the movie is going to get into gender roles and transactional relationships in a way that’s sharp and new.

And then it doesn’t quite do that. As I felt he did with “The Square” too, Östlund has a habit of getting distracted by a similar idea without doing the work to tie it back to the previous one in a satisfying way. The mid-section of “Triangle of Sadness” takes place aboard a yacht that Yaya and Carl have been invited to socially promote. (She will take photos of herself with pasta near her mouth but not actually eat it.) It’s here that Östlund plays a little “Upstairs, Downstairs,” introducing us to a crew of people so wealthy that they’ve lost all touch with average reality. Most of them have earned generational wealth through ventures that haven’t exactly bettered the world, such as the kind elderly couple whose fortune comes from grenades or the gentleman who likes to tell people he made his money with shit—he’s a fertilizer magnate. From the beginning of this segment, Östlund is toying with literal levels of society as the rich people sun on the deck above, the white staff celebrate their potential tips in the middle, and the largely non-white staff sits in the hull below.

Östlund's intent plays out in a series of bitter exchanges. A woman (Mia Benson) insists that the ship’s sails must be cleaned—the yacht has no sails. Carl gets jealous of a shirtless worker that catches Yaya’s eye and so basically gets him fired. A milquetoast software genius (Oliver Ford Davies) comes to life when two pretty women take a photo with him. A passenger (Sunnyi Melles) insists that the entire crew go for a swim. In Östlund’s most discomfiting choice, another woman (Iris Berben) has been disabled by a stroke and can only repeat the words “In Den Wolken,” which means “In the clouds.” Clearly that's where Östlund thinks most of these people live, far from a grounded reality.

It’s all kind of obvious but it does put down some rich soil for a potential dismantling of societal expectations. These people have clearly been set up to fall from the pedestals on which they live. That comes in the centerpiece of “Triangle of Sadness,” a ridiculous yet riveting sequence in which the passengers sit for a lavish Captain’s Dinner on a stormy night. As Woody Harrelson’s world-weary captain eats a hamburger instead of whatever concoction the chefs have dreamed up to impress the passengers, Östlund tilts his camera back and forth with the waves, making us feel nearly as nauseous as the characters on-screen. The night devolves into a chaotic expression of bodily fluids that basically tear down all societal structures and sets up the final act, one that reverses roles and puts one of the ship workers (a memorable Dolly De Leon) in a position of unexpected power.

It's hard to shake the feeling that Östlund thinks he’s saying more here than he actually is—I think that pretentious intent is at the root of most on the hate side of this film’s divide—but that didn’t make the film significantly less entertaining as a social satire for me. Östlund is shooting fish in a barrel, but the fish had it coming, and he cooks them up into a tasty meal, complete with sea urchin and squid emulsion on the side. I wish the journey had lived up to its prologue—Carl and Yaya, despite a captivating performance from Dean, become unexpectedly minor players as Östlund becomes more interested in themes than people—but I don’t regret boarding the ship. 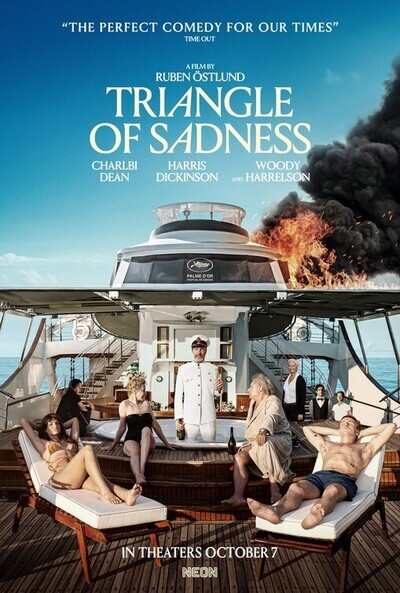