Director Stephen Daldry is some kind of “Oscar Whisperer.” His first three features, “Billy Elliott,” “The Hours” and “The Reader” earned him Best Director nominations, and three of his last four films were Best Picture nominees. Six of his actors have been up for Hollywood’s golden boy, with the two worst nominees taking home Best Actress. Daldry specializes in “prestige pictures,” usually adapted from some best-selling novel and tarted up with all manner of tics and tricks designed to feign enormous levels of importance. Academy voters eat them up, so this is a case of hating the game and not the player. You can knock the movies, but you can’t knock the hustle.

Daldry’s latest, “Trash,” co-directed with Christian Duurvoort, not only pitches the same Academy woo, it shamelessly mimics Best Picture winner “Slumdog Millionaire.” Based on a young adult novel by Andy Mulligan, “Trash” follows three teenaged Brazilian boys as they navigate a system of corruption out to destroy them. There’s millions of reals (Brazilian dollars) at stake, rap music blasting on the soundtrack, quick edits designed for maximum visual sexiness, minimal agency for our heroes, and vile graphic violence that serves only to titillate. It’s all wrapped up in a video-based narrative structure that can’t decide whether it’s cutesy or traumatizing, and cinematography that has the color palette of succotash.

And yet, this is Daldry’s most watchable movie since “Billy Elliott." It’s exploitative at times, but nowhere near as repulsive as “The Reader” or as cringe-inducing as “Extremely Loud & Incredibly Close." And unlike “The Hours,” “Trash” kept me awake for all 114 minutes of its runtime. There were moments when I was truly entertained, but more often than not, I wanted to know more about the daily lives of these kids. Their existence, and the poverty they inhabit, is used as mere window dressing. Even the corrupt politician’s fraudulent actions become a MacGuffin of sorts, and it’s the catalyst for the entire plot.

Screenwriter Richard Curtis (“Love Actually”) gives his trio of protagonists moments to shine or play the hero in their action-filled story, but he’s far too concerned with skimming the surface of the plot’s mechanics. As good as the three teenaged leads are—and they’re quite good—“Trash” treats them like video game avatars. They are chased for much of the film by a corrupt cop who is like a human version of "The Terminator."

That nameless cop (Selton Mello) is looking for a wallet owned by Jose Angelo (Wagner Moura). Angelo was the right-hand man for Santos, whose mayoral campaign is filled with pay-outs designed to ensure his election. Angelo has the incriminating goods on Santos, which he steals along with garbage bags full of cash. Angelo’s wallet contains the key to exposing Santos, so when surrounded by cops, Angelo tosses it into the garbage dump below his apartment. In flashes of violence, we learn Jose Angelo gets tortured and killed.

Meanwhile, back at the dump, 14-year-old Raphael (Rickson Tevez) earns a few reals by sifting through trash. He finds Angelo’s wallet and splits the money inside with his friend Gardo (Eduardo Luis). But before they can dispose of the seemingly useless other contents in the wallet, Officer Mello offers a reward if anyone finds the wallet. Immediately suspicious, Raphael and Gardo set out to discover why the contents are so important. Angelo’s personal effects include pictures of a little girl, cryptic numbers written on the back of a photo strip and a locker key.

To find a safe place to hide the wallet, Gardo and Raphael visit Rato (Gabriel Weinstein). Rato lives in the sewer. “I’m a sewer kid,” he says on the video playback “Trash” uses as narration. Rato recognizes the locker key and the trio embark on an adventure that will take them to jail, to the beautiful beaches of Brazil and to the precipice of death. Occasionally, they’ll be assisted by characters played by Martin Sheen and Rooney Mara, both wasted as Catholic Church workers who help the locals.

Like most of Daldry’s own work, “Trash” suffers from a tonal problem. It reveals itself in the film’s most brutally offensive scene, which exists solely for shock value. Officer Mello kidnaps Raphael and takes him on a “hard ride” in the back of his police car. As classical music plays and the edits fly fast and furiously, Raphael’s face and head are smashed against the police car’s metal bars. When that doesn’t get him to talk, Raphael is then thrown into the trunk of the police car and driven around again. The result turns his head into a bloody pulp.

In a much grittier, more honest look at police corruption and abuse of the poor, this scene would have had merit. But “Trash” doesn’t earn this violence, so it comes off as a cynical, callous request for the audience’s bloodlust rather than a harrowing investigation of a serious problem. While the caper plot has its moments, I kept hoping “Trash” would do more than treat its setting as some curiously unexplainable foreign planet.

“Trash” is almost saved by the beautiful camaraderie between Weinstein, Luis and Tevez. They rib each other as 14-year-olds do, but they’re also protective and loving toward one another. Each of them relies on, and respects, what the others bring to the table, both in the action-filled moments and the quiet ones. I liked their performances a lot. You want them to succeed and survive. You also want their characters to be in a better movie, one that gives them the fleshing-out they deserve. 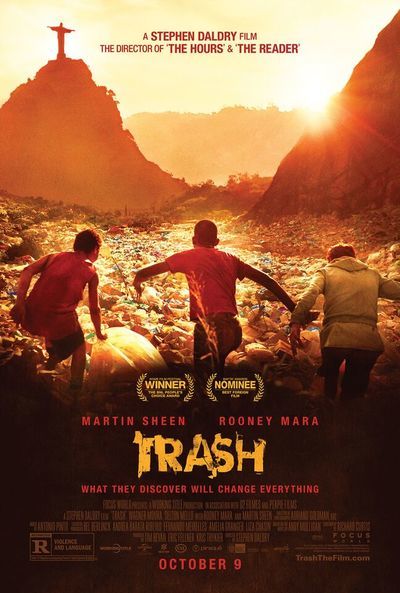