For years, movie fans have wanted to see Michael Madsen and John Travolta reprise their characters Vic and Vincent Vega, criminal brothers in Quentin Tarantino’s movies “Reservoir Dogs” and “Pulp Fiction” respectively. It’s been a long time since the Tarantino Omniverse has been invoked seriously, but the recurring/overlapping characters in films written and directed by Tarantino was a fun thing to track. And Madsen had mentioned that Tarantino had an idea to team up the characters in spite of their advancing ages.

But it hasn’t happened yet and instead Madsen and Travolta meet in the decidedly undistinguished dirt-racing film “Trading Paint.” This movie begins on the Talladega track, as young Cam Munroe (Toby Sebastian) goes up against Bob Linsky (Madsen). The race announcers, both of whose last names should be “Exposition,” explain that Cam is the son of track manager Sam “The Man” Munroe, who was himself once Linsky’s most bitter rival. (A later shot in which Travolta makes a sweeping arm gesture and exclaims “F***ing Linsky” ought to be made into a GIF.)

Anyway, Cam blows the race because his car’s engine is garbage. This seems like a soluble problem, but apparently with Sam in charge of Cam’s career, it’s intractable. In flashback we learn why Sam himself doesn’t race anymore: because he’s a terrible driver who killed Cam’s mother in an auto accident. I mean, that’s not what the film wants us to believe but nevertheless shows us: a completely avoidable crash that happened because Sam chose to make out with his wife rather than keep his eyes on the road.

He seems to have learned to take this in stride in some respects because the next scene shows him at the fishing hole romancing some lady who looks an awful lot like Shania Twain. It took me a while to realize she actually IS Shania Twain, because I initially thought “What does Shania Twain need this kind of low-rent enterprise for?” Maybe she really wanted to meet Travolta.

In any event, the “snake” Linsky offers Cam the opportunity to drive for him instead of his dad. He promises to actually give him a car that works. Imagine. And so he does. But Sam doesn’t take it very well. He asks Shania Twain to talk to the kid. And say what? Travolta’s the one who’s in a huff. And he’s in so much of a huff that he takes to racing again himself. You’d never have guessed, I’m sure.

During one race pitting the three men of speed against each other, those exposition-happy track announcers say of Sam: “So now he’s mixed up with a crazy soap opera that has his son, Cam, racing for his old arch rival Bob Linsky. Hell, you couldn’t write this any better.” I give the screenwriters Gary Gerani and Craig R. Welch a lot of credit for having the cojones to tee up the ball for film reviewers like that. But not for anything else. 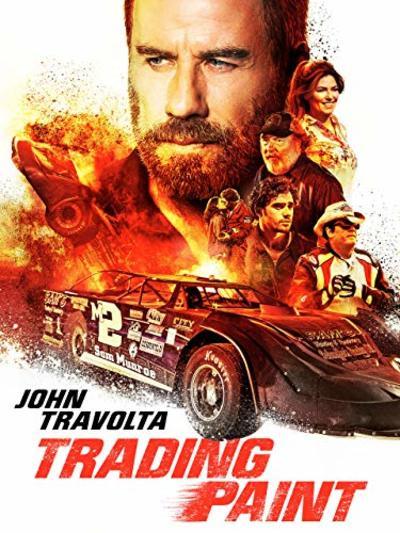