Documentaries about events in the somewhat-distant past tend to speak in a familiar visual vocabulary. If you see enough films along those lines, you get used to the tricks, and they can make the events themselves, however gripping, feel perfunctory—especially re-enactments, which tend to be either so overproduced that you wonder why they just didn't go ahead and make a dramatic film with actors, or else so abstract (silhouettes, blurred faces, closeups of hands and feet and clothing de tails) that the movie seems to have been put together from a mass-produced "make your own documentary" kit. Once in awhile, though, you see a documentary that creates its own distinctive aesthetic while still honoring the subject. "Tower," about the 1966 mass shooting at the University of Texas at Austin, is that kind of movie.

Directed by Keith Maitland from Pamela Colloff's Texas Monthly article "96 Minutes," it reconstructs one of the first modern sniper-driven bloodbaths, minute by minute, hour by hour, mixing traditional interviews and animation. This mix of modes finds a different way into the events of that day, capturing the fear, pain and resilience of the community in the manner of a reporter, but also a musician or painter. Like other semi-recent nonfiction films that used animation, including "Waltz with Bashir" and "Chicago 10," "Tower" is explanatory journalism and history, but also personally expressive, and the two impulses never cancel each other out.

The shootings took place on August 1, 1966, when a man armed with a high powered rifle, a sawed-off shotgun and other weapons locked himself in the observation deck of the main tower of the campus and started shooting at people down below, seemingly at random. At first people didn't know what was happening. The gunshots sounded like firecrackers, and the first few successful hits were scattered in so many different areas of campus that it took a while for bystanders to realize the full magnitude of the event and take cover. By the end of the day, 14 people were shot and killed; the sniper was eventually shot dead by police who breached the barricade. The UT-Austin shootings are now seen as a harbinger of shooting sprees to come, but for whatever reason this particular story has never been told in a feature-length documentary before.

Maitland and his collaborators structure the story in the manner of a nonfiction novel—or the type of ensemble drama that Robert Altman, Paul Thomas Anderson or Austin's own Richard Linklater might make. We're introduced to a wide variety of characters from different walks of life. Some will live, others will die; some of the survivors will watch as their friends are murdered for no reason at all.

It's a horrendous story, but the film does an exceptional job of building dread about the inevitable carnage without seeming as if it's exploiting morbid curiosity; it also leavens the fear and violence with an appreciation of the coolheadedness and patience that many survivors displayed, such as the young female student who saw her friend killed right next to her, then "played dead" beside her and remained perfectly still for over an hour as the massacre unfolded. The relative youth of so many victims comes through with piercing poignancy; whether they were university students, staff or local newspaper deliverers, they were just going about their business on what seemed like another unremarkable day.

The animation is of the type known as Rotoscoping, created by drawing over live-action footage of actors, then juxtaposing their moving bodies and faces against photographed or illustrated backdrops. This kind of animation was perfected by Ralph Bakshi in the 1970s and reinvigorated recently via Linklater's films "Waking Life" and "A Scanner Darkly." It splits the difference between live-action filmmaking and traditional animation; the latter might use real actors as reference points for motion, but it otherwise treats the rendered characters as graphic elements in a series of moving paintings. There are some stylized touches—the blood is very red, and the action sometimes shifts into slow-motion—but Maitland and his animators never cross the line and allow a grotesque and senseless tragedy become something pornographically "cool," which is always a risk in brutal movies about real-life massacres.

The surviving witnesses (including the police officer who shot the gunman) are all in their 60s or 70s or older now, but as they speak, it's clear that the trauma has never left the forefront of their minds. They often break down in tears recounting what happened to them. The film has no political opinion on guns or gun regulation, and that's probably wise, considering that in 1966, few municipalities gave much thought to such things, especially in onetime "frontier" states; nevertheless, it is impossible to watch "Tower" without thinking of the seemingly unending string of mass shootings that have been occurring in this country ever since, with increased frequency and escalating deadliness. The current, excellent, somewhat more political "Newtown" strikes similar notes, though it deals extensively with the aftermath of a shooting rather than concentrating on the event itself.

One common thread in both films is their refusal to spend much time considering the motives or life story of the killer. The killer in "Newtown" is never mentioned, and we only hear the name of the "Tower" killer once, at the very end, in a summarizing newscast snippet that goes by so quickly that you barely have time to register it. That information is, of course, only a mouse click away, so I doubt the makers of either film are trying to pretend that nobody is interested in the people who did the deed. It feels more like they're sending a statement: turning stories of evil into heroic survival narratives; denying infamy, erasing the erasers. 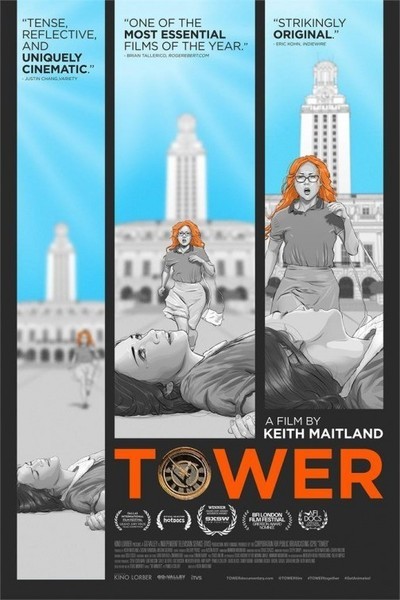