"Together Together" is not just smart, it's sneaky-smart. You go into it thinking you know what you're getting into, and feeling impatient or dismissive as a result, because the movie conspicuously makes choices that seem intended to announce which boxes it's about to check off. Then it keeps confounding you—in a way that's understated rather than show-offy—until you have to accept it on its own terms. It's the perfect storytelling tactic for a movie about a surrogate mother and her patron, a divorced man 20 years her senior. The main characters don't fully appreciate each other until they quit trying to categorize their relationship and let it be whatever it's going to be, while trying not obsess over what'll happen once the baby is born.

The rope-a-dope strategy starts in the opening sequence. A middle-aged man named Matt (Ed Helms) interviews a young woman named Anna (Patti Harrison) in what initially seems like a speed date, then a job interview (it's both, in a way). The questions are cutesy yet invasive ("What's the worst thing you've ever done?"). The solo piano score, by Alex Somers, has that yacht-cutting-through-clear-water sound characteristic of hyper-verbal indie-film comedies about well-off suburbanites muddling through existential crises. The credits font is Windsor Light Condensed, used in all Woody Allen films since "Annie Hall.” Between the the lead actors' age gap, and their self-aware yet sometimes stumbling comic banter, it seems as if "Together Together" is a try-hard that's aiming to give us the pleasures of a mid-period Woody Allen film without having to factor in, um, y'know, Woody Allen.

As it turns out, this is not the kind of film where the leads overcome social obstacles and live happily every after as husband and wife. In fact, it turns out to be a rare film about two characters you've never seen in a movie. They initially seem cut from middling romantic comedy cloth. Writer/director Nikole Beckwith and her lead actors gesture in that direction by having Matt and Anna quickly disclose shared feelings of loneliness and aloneness (different concepts) and talk about their troubled pasts. Matt is the designer of a masochistic app called Loner that lets users browse profiles of other singles; they're not allowed to save profiles unless they favorite them, and they can only pick one to favorite. Matt's marriage collapsed for undisclosed reasons (basic incompatibility, it seems). But he decided to have a kid anyway, using his own sperm and a donated egg. He's acutely self-conscious about being a single, straight man in his predicament. Anna got pregnant in college, gave the baby up for adoption, and earned the double-ire of her parents, who considered her a failure both for having an unplanned pregnancy and not keeping the kid. "It seemed as if the only way they would be happy is if I was wildly unhappy," she tells Matt. What is this, discount Charlie Kaufman?

But the more time you spend with these two, the harder it is to categorize what kinds of characters they are, much less compare the film to others or predict what'll happen to the main couple. In fact, it feels wrong to call them "a couple." They're more than friends, less than lovers. Well, not "less than," because that phrase implies that a romantic relationship is greater than friendship. Then again, is this even a friendship? Anna asks that. She's right to wonder. Matt doesn't know how to respond.

It's complicated. Money is involved. They've held hands, but not each other. They've shared secrets, but not a bed. Anna isn't attracted to Matt, and to the extent that Matt makes overtures in that direction, they seem obligatory, as if he's been conditioned to expect a heteronormative fantasy outcome (as academics might describe it). What drives these two? What are we looking at when we look at them? Anna and Matt's predicament is like that moment when you're working on a project late at night, bleary-eyed and easily distracted, and stare at a commonplace word like "door" for a long time and think, "Is that really how it's spelled?"

The script has a three-trimester structure. In the first trimester, you wonder if Beckwith is incompetent, bad at conveying basic plot information, or just messing with your head. The characters keep ending up in situations that make you wonder if boundaries were even discussed (as when Matt is present in a room where Anna is being wanded by an obstetrics nurse, and brings Anna a gift of a human-sized teddy bear, the go-to impulse buy in unimaginative romantic comedies). By the second trimester, Matt and Anna seem to be getting along so well that you wonder if the film is going to have them fall in love and get married anyway. Matt is an unglamorous but decent man, the "good catch" in rom-coms who might end up with the female lead after a sexier but more chaotic and self-centered man broke her heart. Matt is constantly doing little favors for Anna and questions himself when he inadvertently upsets her. Anna is grateful for the compliments he gives her, as well as the way he rescues her from awkward situations.

Boundaries are discussed in due course, as is the Woody Allen comedy and its cliches about the "natures" of men and women (and its obliviousness about age gaps). Some of the first-trimester scenes feel, in retrospect, misjudged, or at least not thought out. There should be a way to get us to appreciate the awkwardness of characters not knowing how to behave without making us wonder if the filmmaker is clumsily imitating rom-com tropes. And a long-ish scene where Woody Allen's films are critiqued feels like a pointless detour into subtext-as-text. It's the worst thing in the movie by a wide margin because it's inorganic and discursive—a withering critical monologue that should've been saved for the PR tour.

Despite these and other missteps, "Together Together" is a sturdy film that's determined to avoid the obvious choice. Like Beckwith's feature debut, "Stockholm, Pennsylvania," it invites inattentive viewers to put it down for being something it only pretended to be, on purpose, and only briefly. Harrison and Helms are a thoughtful duo. Each has a melancholy streak. Each seems determined to surprise the other and refuse to allow simplistic choices to pass unchallenged. Mutual respect comes through in their performances. There's a scene in a birthing class that might constitute the best acting either has done to date.

The end of the tale is the climax that the trimester structure demands. By that point you might find yourself invested in the happiness of characters whose relationship is hard to sum up. Some of the most memorable sections of the film are montages where you watch a character go about their self-involved business without noticing the other's wounded feelings. The last shot reminded me of the closing images of "The Graduate," "Big Night," "Solitary Man," and "Private Life," in that it refuses to supply answers, instead leaving viewers with a single question: Now what? 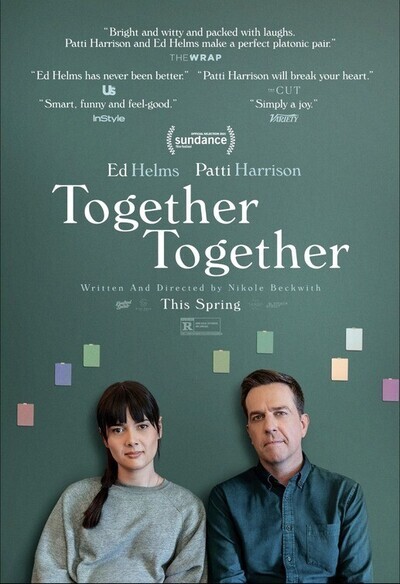