Tina Turner's 1984 Private Dancer, with Tina on the cover in a black low-cut leotard, legs gloriously splayed out in an aggressive "Here I am, deal with it" rock star attitude, was a monster. If you were alive in 1984, you will remember. Like Thriller, like Purple Rain, it kept going ... and going ... and going, with single after single climbing the charts. It won four Grammys, including Best Record of the Year. “Better Be Good To Me" won Best Rock Performance by a woman while "What's Love Got to Do With It” won Best Pop Performance, indicative of the album's massive crossover appeal. Turner filled massive stadiums around the world during the Private Dancer tour. To those who knew Turner's background only in connection with her fruitful (yet tormented) collaboration with ex-husband Ike Turner, this felt like just desserts as well as a long-overdue comeback. Considering all of this, it is so striking to watch the new HBO documentary "Tina", and hear current-day Tina say, : "[Private Dancer] wasn't a comeback. It was a debut. It was my first album."

Breaking down why she feels that way, as well as showing why it's true, is what "Tina," co-directed by Daniel Lindsay and T.J. Martin, is all about. Private Dancer felt like it came out of nowhere. Turner had been toiling in relative obscurity ever since the breakup with Ike. She walked out of that relationship with just her name. She did a cabaret act in Vegas, she appeared on every television show under the sun. When Private Dancer was released, she was 45 years old playing stadiums for 30,000, 50,000 people. Unheard of. This is why her career is so monumental in its impact, not just for her, but for the culture as a whole. Rock and roll is not just a young person's game. "Tina" understands this deeply.

Tina now lives in Zurich, with her husband, former record company executive Erwin Bach, and she sat down to be interviewed for the documentary (sometimes calling to her husband off-screen for confirmation of some detail). These interviews are interspersed with tape recordings of the interviews she did with Kurt Loder, who co-wrote her best-selling memoir I, Tina. Those conversations with Loder were more free-styling expression, often proclaiming her pain in a raw way: "Kurt, why did I get so far without any love in my life?"

That's an understatement. Abandoned by both her parents, Anna Mae Bullock went to go see Ike Turner, heading up his R&B band. Tina describes almost falling into "a trance" when she saw him onstage. Ike heard Tina sing, and knew instantly she had to become part of his act. Ike had been burnt many times by collaborators abandoning him or taking credit for his work, and he used this against the young naive Tina as a way to keep her loyal and dependent. He saw dollar signs when he heard her sing, and while there's not necessarily anything sinister about that, it morphed into something extremely sinister very quickly, with Tina suffering frequent horrific beatings and violent sexual abuse. Tina was a hostage, not a wife.

The documentary doesn't rely on social-worker talking-heads to explain why women stay in abusive situations (just one example of how the doc could have gone wrong). Instead, it sticks with Turner's experiences, through home movie footage, archival interviews with one of her sons as well as Ike himself. Most powerfully, there are clips of Ike and Tina (and the Ikettes) performing, on television, in clubs, and Lindsay and Martin have made the choice to let these performances play out, almost in full. (This is true throughout the documentary.) You can't understand Tina Turner fully if you haven't see her in her "act" with Ike, and the way she attacked those stages in a primal powerful truly thrilling way, whirling with the Ikettes in bright yellow and pink dresses, whipping the audiences into a frenzy. Tina's voice came from her guts.

Later performances also play out in full. She does an overwhelming rendition of "Help!", in front of a packed stadium, but it has the intimacy of a one-to-one interaction, as Tina howls out her confession of pain, her literal cry for help. So many documentaries cut away from performances, thinking we only want a glimpse of it to get the gist before shuttling on to the next thing. What a joy to be given the space to settle in and let Tina take you where she wants you to go.

The issue of the abuse she suffered at the hands of Ike wasn't really known by the public until she decided to tell the story to People magazine in 1981. Ever since, she has been dogged by questions about it, even as her solo reputation soared into multi-platinum status. This not only frustrated her, but re-traumatized her all over again. She speaks very movingly of this. Her book was written, in part, to tell the story herself in the hopes that it would close the subject. Of course people were even more impertinent and curious. The 1993 movie "What's Love Got to Do With It?", starring Angela Bassett (who was interviewed for the documentary), and Laurence Fishburne as Ike, brought the toxic relationship once again back to the forefront, leading to another press tour where she had to answer disgusting questions like: "What was the worst part of the abuse?"

In 2019, Tina: The Tina Turner Musical opened on Broadway and Tina, on the arm of Oprah Winfrey, attended. Throngs of people clamored around her limousine when she arrived, and the ovation she received when she entered the theatre could have been heard in Albany. Tina Turner is 80 years old now. She's retired. She says that her attendance that night was "a goodbye to her American fans." There's a sadness in this, something the documentary allows for, even encourages. As Bassett says, in her emotional interview, "That's what happens to icons. Tina Turner belongs to the world."

I saw Tina in concert in 1988, during her Break Every Rule tour. Sitting outside on the lawn at Great Woods, the anticipation was so palpable it felt like thousands of people were on the verge of nervous collapse. She hadn't even appeared yet. And then she rose up through the stage on a moving platform, blasted by light, like a superhero launching into the sky. Her lion's mane of hair seemed to stretch to the rafters. When she reached out her arms to us, energy like lightning bolts came out of her fingers.

You don't see performers like Tina every day. Or every year. Or every decade. There's only one. Let's not wait for the eventual obituaries to pour out our appreciation. "Tina" allows us to do it now. 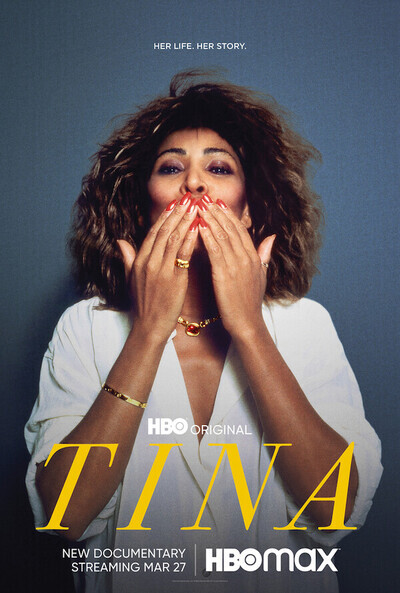 Tina Turner as Self

Angela Bassett as Self

Kurt Loder as Self

Katori Hall as Self

Erwin Bach as Self

Roger Davies as Self

Rhonda Graam as Self

Terry Britten as Self

Jimmy Thomas as Self

Carl Arrington as Self