First reactions while viewing “Time Bandits”: It's amazingly well-produced. The historic locations are jammed with character and detail. This is the only live-action movie I've seen that literally looks like pages out of Heavy Metal magazine, with kings and swordsmen and wide-eyed little boys and fearsome beasts. But the movie's repetitive, monotonous in the midst of all this activity. Basically, it's just a kid and six dwarfs racing breathlessly through one set piece after another, shouting at one another. I walked out of the screening in an unsettled state of mind. When the lights go up, I'm usually fairly certain whether or not I've seen a good movie. But my reaction to “Time Bandits” was ambiguous. I had great admiration for what was physically placed on the screen; this movie is worth seeing just to watch. But I was disappointed by the breathless way the dramatic scenes were handled and by a breakneck pace that undermined the most important element of comedy, which is timing.

“Time Bandits” is the expensive fantasy by Terry Gilliam, one of the resident geniuses of Monty Python's Flying Circus. It is not a Monty Python film. It begins with a little boy who goes up to bed one night and is astonished, as we all would be, when a horseman gallops through his bedroom wall and he is in the middle of a pitched battle. Before long, the little kid has joined up with a band of six intrepid dwarfs, and they've embarked on an odyssey through history. The dwarfs, it appears, have gained possession of a map that gives the location of several holes in time--holes they can pop through in order to drop in on the adventures of Robin Hood, Napoleon, and King Agamemnon, and to sail on the Titanic's maiden voyage.

As a plot gimmick, this sets up “Time Bandits” for a series of comic set pieces as in Mel Brooks's “History of the World -- Part 1.” But “Time Bandits” isn't revue-style comedy. It's more of a whimsical, fantastic excursion through all those times and places, and all of its events are seen through the wondering eyes of a child. That's where the superb art direction comes in--inspired work by production designer Milly Burns and costume designer Jim Acheson. I've rarely, if ever, seen a live-action movie that looks more like an artist's conception. And yet, admiring all of these good things (and I might also mention several of the performances), I nevertheless left the screening with muted enthusiasm. The movie was somehow all on the same breathless, nonstop emotional level, like an overlong Keystone Kops chase. It didn't pause to savor its delights, except right near the end, when Sir Ralph Richardson lingered lovingly over a walk-on as the Supreme Being. I had to sort things out. And I was helped enormously in that process by the review of “Time Bandits” by Stanley Kauffmann in The New Republic. He describes the film, unblinkingly, as a "children's movie." Of course.

There have been so many elaborate big-budget fantasies in recent years, from “Raiders” to “Superman” to “Clash of the Titans,” that we've come to assume that elaborate costume fantasies are aimed at the average eighteen-year-old filmgoer who is trying to recapture his adolescence. These movies have a level of (limited) sophistication and wickedness that is missing in “Time Bandits.” But perhaps “Time Bandits” does work best as just simply a movie for kids. I ran it through my mind that way, wondering how a kid would respond to the costumes, the panoply, the explosions, the horses and heroic figures, and, of course, the breathless, nonstop pacing. And I decided that a kid would like it just fine. I'm not sure that's what Gilliam had in mind, but it allows me to recommend the movie--with reservations, but also with admiration. 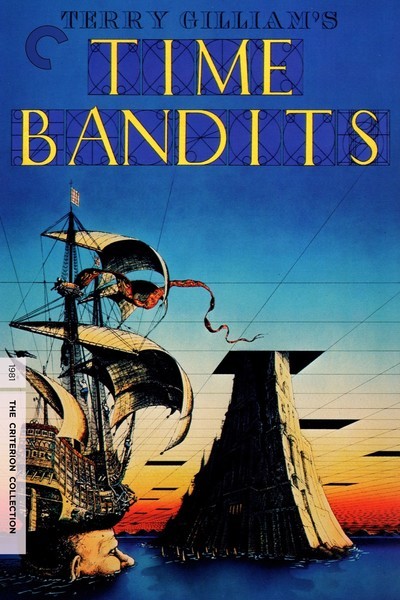