History of the World -- Part 1

Mel Brooks's movie “History of the World, Part 1” is a rambling, undisciplined, sometimes embarrassing failure from one of the most gifted comic filmmakers around. What went wrong? Brooks never seems to have a clear idea of the rationale of his movie, so there's no confident narrative impetus to carry it along. His "history" framework doesn't have an approach or point of view; it's basically just a laundry-line for whatever gags he can hang on it.

What is this bizarre grab bag? Is it a parody of old Biblical, Roman, and French historical epics? Sometimes. Is it one-shot, comedy revue blackouts? Sometimes. Is it satire aimed at pompous targets? Sometimes. But most of the time it's basically just expensive sets sitting around waiting for Brooks to do something funny in front of them.

Brooks seems to rely on his own spontaneous comic genius in this film, and genius, even when you have it, is not something to be relied upon. He provides isolated moments that are indeed hilarious, moments that find an inspired image and zing us with it (as when a slave boogies through the streets of ancient Rome with a loud transistor radio glued to his ear). But as the movie creeps on, we realize that the inspirations are going to be rare, and that Brooks has not bothered to create a framework for the movie or to people it with characters. It's all just cardboard comic cutouts.

The film has another serious problem: It is in unfunny bad taste. That sounds strange coming from me. I've always enjoyed Brooks's ventures into taboo subject matter, and I still think his "Springtime for Hitler" from “The Producers” and the celebrated campfire scene in “Blazing Saddles” were hilarious. He seemed to be demonstrating that you could get away with almost anything in a movie, if you made it funny enough. (Told that “The Prodcuers” was vulgar, he once responded loftily, "It rises below vulgarity.") But this time, the things he's trying to get away with aren't funny. There is, for example, the movie's tiresome series of jokes about urination. There must be comic possibilities in the subject (and he finds one when he shows a Stone Age critic's method of reviewing a cave painting), but there is nothing inherently funny about urination, and Brooks proves it here, again and again.

There also is nothing inherently funny about Jews, Catholics, nuns, blacks, and gays. They can all conceivably provide the makings of comedy, of course, but in “History of the World” Brooks doesn't have the patience to introduce a character and then create a comic situation about him. He introduces the character and expects us to laugh at the character himself. Example. Instead of developing a comic situation around Orthodox Jews, he simply shows us some, complete with beards and hats, their heads stuck through a stockade, and expects us to laugh. But while we might laugh with Brooks at a comic situation, we have no reason to laugh at people just because of their appearance or religion.

The same thing goes wrong with Brooks's big production number in this movie, "The Inquisition," featuring a song-and-dance team of medieval monks, and a chorus line of nuns who splash in a pool, Busby Berkeley-style. We're supposed to laugh at the shocking juxtaposition of religious images and Hollywood corn. But Brooks never gives us an additional comic level, one where he's making funny points about the images. When he dresses up like a monk and then dances like Donald O'Connor, that's only funny for a second. If we knew anything about the monk as a comic character, the scene could build. Instead, it just continues.

“History of the World, Part 1” was fairly expensive to produce, but it exists on the level of quick, disposable, television. It thumbs its nose at icons that have lost their taboo value for most of us, and between the occasional good laughs, we're a little embarrassed that the movie is so dumb and predictable. God knows Mel Brooks is straining for yuks up there on the screen, but he's like the life of the party who still has the lampshade on his head when everybody else is ready to go home. 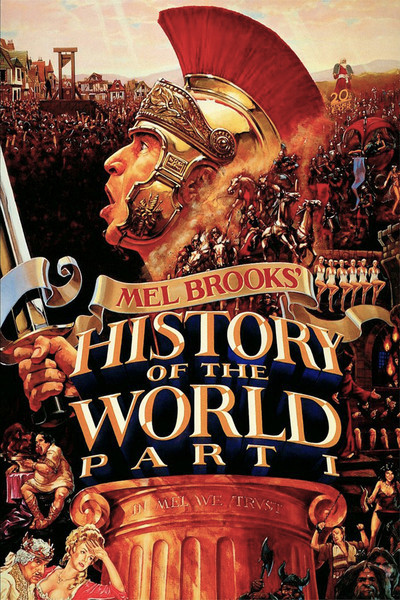