Having earned countless millions of dollars for Blumhouse Productions and Universal Pictures with “The Purge” and its sequels, writer/director James DeMonaco has been given the chance to make a film that is presumably closer to him on a personal level and which does not center on people being torn apart like fresh bread. The only problem is that the resulting movie, “This is the Night,” is such a spectacular misfire on every imaginable level—and even some you haven’t begun to imagine—that there are times when one might mistake it for an especially clever and relentlessly deadpan satire of the type of film it's desperately trying to evoke. If that had been the case, it might have become some kind of masterpiece. Alas, it is relentlessly sincere throughout and that somehow just makes an already terrible film even worse.

The film takes place on May 28, 1982, a date you will all no doubt recognize as being only one week before the opening of the monumental “Star Trek II: The Wrath of Khan.” It turns out that it was also the opening day of “Rocky III,” the Sylvester Stallone-directed sequel to his 1976 Oscar-winning hit about a palooka boxer who unexpectedly gets a shot at the heavyweight title. Now I am old enough to have actually seen “Rocky III” on its opening weekend and while the crowds certainly came out, I don’t recall anyone being demonstrably fanatic about it. Evidently that was not the case in the Staten Island neighborhood where this film is set, where it is depicted as an event which sends practically the entire town to the local theatre to catch the show in an act of near-religious devotion. I dunno—maybe those of us in the Midwest were a little more reserved back then, or we instinctively knew to hold the displays of over-the-top devotion for another month in order to herald the debut of “Megaforce.”

But I digress. Anyway, “This is the Night” is centered on the Dedea family, all of whom have their own personal problems to bear. Youngest son Anthony (Lucius Howard) is an awkward 16-year-old who wants to wish his not-so-secret crush Sophia (Madelyn Cline) a Happy Birthday and confess his feelings for her at her party later that night. His father, Vincent (Frank Grillo) runs the financially struggling banquet hall where the party is happening and is about to lose it to local mobster Frank Larocca (Bobby Cannavale), who plans to torch the place for the insurance after the party, and also who happens to be Sophia’s father. Older brother Christian (Jonah Hauer-King) is secretly struggling with sexual identity issues and with the fact that he does not want to follow his father’s wishes for him to go to trade school. As for Mom, Marie (Naomi Watts), her cross to bear is being the one major female character in a guy-centric movie and therefore given nothing of substance to do except fretting in the background.

So anyway, they all go to the film together and they find themselves duly inspired by Rocky’s can-do spirit to go off and conquer their various troubles. For Anthony, this is more complicated because as the film ends, Sophia’s loutish boyfriend Santo (Steve Lipman) turns the entire town against him by loudly insulting Rocky Balboa—the most important hero of the time, we are told later on—and claiming that he said it. As a result, Anthony and friends Dov (River Alexander) and Albie (Chase Vacnin) find themselves marked men as they attempt to get to the party in one piece. (This entire plot thread is more suggestive of Walter Hill’s “The Warriors,” one of any number of films you would be better served by watching instead of this.) For Vincent, he finally musters up the courage to confront Frank, who is still mad that Marie chose Vincent instead of him way back when. As for Christian and Marie, you will have to see the film to discover what happens with them, largely because you wouldn’t believe me if I told you.

“This is the Night” clearly aspires to be something along the lines of the wonderful semi-autobiographical films that Barry Levinson made about growing up in Baltimore in the Fifties and Sixties. Those films—“Diner” (1982), “Tin Men” (1987), “Avalon” (1990) and “Liberty Heights” (1999)—were wonderful because even if you never set foot in Maryland or did interesting things with a popcorn box, they still worked; Levinson tapped into universal feelings and emotions that were easily recognizable no matter where you came from or when you did it. By comparison, everything in “This is the Night” feels contrived and artificial, the cinematic equivalent of a bad theme restaurant. Not only does none of it ever work, there are times when it seems as if every single scene is trying to be the most awkward and unbelievable of the bunch. Trust me, there are a lot of competitors for this particular booby prize.

As for the ostensible hook, the “Rocky III” angle, it proves to be one of the biggest miscalculations. Lord knows I can be guilty of venerating the detritus of my youth at times (you don’t think I had to look up those release dates for “Star Trek II” or “Megaforce,” do you?) but whatever importance Stallone’s film may have had on a young DeMonaco, it does not translate well here. If he used the film to thoughtfully explore why even the most meaningless aspects of popular culture (and face it, “Rocky III” falls into that category) can have such a powerful hold on us, that might have been interesting. Instead, DeMonaco presents the veneration as a given and with a zealousness that is cringe-inducing at times, especially since the lesson sometimes learned is that there's no problem that can't be solved with a punch to the face.

Perhaps the best way to properly illustrate the massive failings of “This is the Night” is to point you in the direction of a film that tries to do many of the same things that it does, only infinitely better. That film would be “Matinee,” Joe Dante’s wonderful, if sadly underseen, 1993 film about a Florida teenager dealing with everything from confessing his love to his longtime crush to looming fears of annihilation brought on by the unfolding Cuban Missile Crisis, and finding inspiration from a William Castle-style schlock film producer who has arrived to preview his latest effort, “Mant!” Smart, funny, and knowing, the film worked beautifully as both a coming-of-age story and as a love letter to the potency of popular culture without ever succumbing to empty nostalgia and can be understood and embraced by anyone, regardless of whether they were around during the time it was set. By comparison, the only genuine feeling that “This is the Night” will inspire in viewers is a fervent wish that the film had simply ignored all of the yo-yos on display, and instead focused on those braver and wiser souls who chose to go to the town’s other theater and see “Dead Men Don’t Wear Plaid” instead. 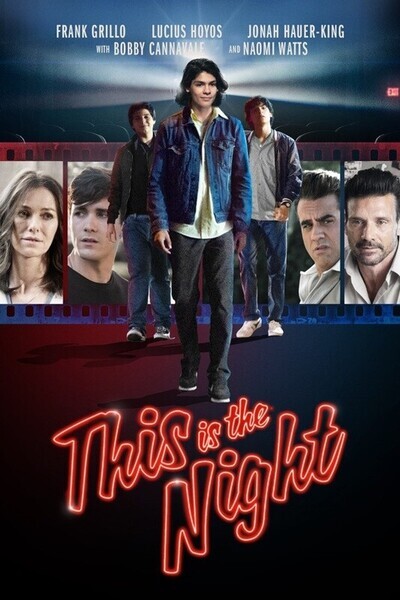 Rated R for language, some drug use and teen smoking.