"The future seems compromised." That line, in Mia Hansen-Løve's "Things to Come," is spoken by an editor at a publishing house, explaining to author Nathalie Chazeaux (Isabelle Huppert) why her popular philosophy textbook needs some serious revisions, maybe even an entire "re-branding." The words make sense in the practical context, but when telescoped out into the themes of this beautiful film they take on enormous relevance. The future that Nathalie believed in now "seems compromised." Hansen-Løve's gift is in presenting this vast internal journey with elegance and clarity, resisting the urge for scenery-chewing catharsis, and always examining just how much time operates as a force in our lives (whether we acknowledge it or not). In one way or another, Hansen-Løve's films are all about the passage of time.

Nathalie and Heinz (André Marcon), both professors of philosophy at universities in Paris, have been married for 25 years, and have two adult children. There is a comfort in the family dynamic coming from the assumptions of continuity. The kids come over for dinner. No tension swirls beneath the surface. Until one day, Heinz tells Nathalie that he has met someone else and will be moving in with her. The ensuing conversation is not accented by tears being shed or crockery being thrown. Nathalie is shocked and blindsided ("I thought you would love me forever," she says, stunned), but it takes a while for the reality to really sink in. Meanwhile, life, in all its complexity, continues. Time, like the cliched river, keeps rolling on. When Fabien (Roman Kolinka), her former protégé, asks her how she is doing, she says, “It’s not that serious. My life isn’t over. Deep down, I was prepared. I’m lucky to be fulfilled intellectually.” You believe her.

However, life is not just one thing, life is made up of many parts. Hansen-Løve's narratives are about the many parts. During the year of time "Things to Come" takes place, Nathalie experiences the dissolution of her marriage, the dawning realization that her high-maintenance mother (Edith Scob) can no longer take care of herself, the changing of the guard at her publishing house and the troubling implications of that, and a new friendship with Fabien, a writer of great promise now living in an anarchists' collective in the countryside. She also has to figure out what to do with Pandora, her mother's independent-minded black cat. (In "Elle," released last month, Isabelle Huppert also shares the screen with a memorable cat in a key co-starring role.)

This type of story—long-time marriage falling apart, 50-something woman now on her own and hanging out with her 20-something former student—comes with expectations attached. We think we know what we are going to see. But Hansen-Løve avoids all of it with “Things to Come.” Instead of the cliché, the film—brisk at points, leisurely in others—presents a real-life rhythm of events. People discuss Rousseau and Günther Anders, they argue about the purpose of philosophy and political action. Nathalie’s generation is haunted and defined by the upheaval in 1968. She looks at the idealist young anarchists, sitting around the table discussing the concept of “authorship,” fighting over how to create an alternative paradigm to the only one offered, and she sees herself in her “radical” youth. But this is not the misty nostalgia of a Baby Boomer. At a family dinner, she says to her kids that, unlike the Stalinists she had been surrounded by back then, she “read Solzhenitsyn, end of story.” She tosses that off casually as she puts the food on the table, but it’s one of the many evocative details in the script that rings so true, providing the texture and context for Nathalie’s world and experience. (Solzhenitsyn’s The Gulag Archipelago was published in 1973 and for many it completely detonated any lingering idealism about the USSR.)

What happens is not as important as Hansen-Løve's attitude towards what happens. In this, and in her other films, “Tout est pardonne,” “Father of My Children,” "Goodbye First Love" and “Eden," she is interested in a character—or, in the case of "Eden," a specific “scene”—and how it evolves over time. There is a George Eliot style of distance in her approach, although she is not unattached or indifferent. Her distance helps her to create extremely detailed scenarios, rich with complexity and accuracy, as though her perch on a cloud gives her more perspective. She is not intimidated by Aristotle’s unities. She peppers the action with title cards: “Several Years Earlier.” “One Year Later.” etc. Characters don’t age visibly. She has been criticized for that with her other films, but that criticism seems to be focusing on the wrong things. She's one of our current great humanists.

“Things to Come” is filled with connecting scenes that another director might cut out, thinking they are not necessary or are “filler.” There’s one sequence where Nathalie is first shown being driven to the train, then shown getting out of the car and running across the train platform, and then getting out of a taxi at the other end of her train ride. Another film might have just cut directly to Nathalie’s eventual destination, because who cares about what’s in between if nothing “happens” in between? But Hansen-Løve is all about the in-between, and she always has one eye on the clock. Nobody can avoid time. Nobody can “skip over” steps in any given sequence (at least until teleporting is invented), and that includes fictional characters. Hansen-Løve doesn’t belabor the point (at their best, her films feel effortless), or even make a point of it at all. Everything is carefully considered and chosen, but not fetishized or dwelled upon. The overall sense is that you are watching an actual life unfold, in its minutia and in its enormity.

Because philosophy is at the center of Nathalie’s life, it is at the center of “Things to Come.” Philosophy is not just thought about. It is lived. At one point, Nathalie goes to a movie by herself, seeing Abbas Kiarostami’s “Certified Copy,” starring another French luminary, Juliette Binoche. “Certified Copy” examines reality and illusion, forgery and the real deal: how do we know the difference? Hansen-Løve is confident enough not to bury the lede. Nathalie’s lectures to her students explicitly comment on her experiences, her current situation. So do the books she reads. So do the movies she sees. None of this is too “obvious,” a common criticism with such devices. (To be fair, usually directors use them with all the subtlety of a jackhammer.) In Hansen-Løve’s hands, these devices are an accurate reflection of how thinking people respond to the art they absorb. Who hasn’t read a book and thought it spoke exactly to their own life at that moment? Who hasn’t seen a film and thought, “My God, did that director find my journal or something?” Hamlet famously says, “There are more things in heaven and earth, Horatio, Than are dreamt of in your philosophy.” The toppling of Nathalie’s world, the realization that her expected future has now been “compromised,” leaves her open to that possibility.

In each of her films, Hansen-Løve has the patience to wait for what Henri Cartier-Bresson called “the decisive moment,” the moment where something "small," something detailed and specific, reveals the universal. “Things to Come” is full of such moments. It does not have the impressive sprawl of “Eden,” the hothouse plot of “Goodbye First Love,” or even the melodrama of “Father of My Children.” “Things to Come” is the detailed tapestry of one woman’s life, as she moves through an important transition. Taken together, these films already represent an extremely important body of work. 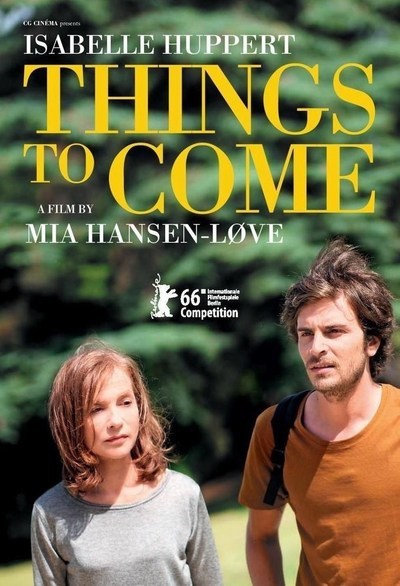