Much like the hit ESPN doc “The Last Dance,” Apple TV+’s “They Call Me Magic” pulls back the curtain on one of the most famous sports stars that ever lived. However, this four-part series isn’t as sports-focused as the one about Michael Jordan, choosing to spend more time with its subject off the court than on it. Earvin “Magic” Johnson isn’t just a world-famous Los Angeles Laker. He’s also a supportive husband, father, and advocate for causes that are close to his heart. Rick Famuyiwa (“Dope”) directs “They Call Me Magic” with a fluid charm that matches its subject, ultimately compiling a document of one of the most likable and successful athletes ever. As someone says in the premiere, “Nobody doesn’t like Magic.”

The love for Johnson is clear from the people who came to a studio to talk about him, ranging from Samuel L. Jackson to Barack Obama to Anthony Fauci to athletes like Larry Bird, Michael Jordan, and Charles Barkley. It feels like they all have a smile on their face as they go through why Magic mattered then and mattered now. But the interesting thing about “They Call Me Magic” is that it’s not reliant on game footage or analysis of a hook shot. In fact, I would bet that the person with the second most interview time after Magic himself is Cookie Johnson, his wife. It makes you think about the title a little differently. It’s not “My Name is Magic.” It’s “They Call Me Magic” because this project is more about Earvin.

Of course, the first chapter is the most important for true Lakers fans, hitting highlights of Johnson’s youth and time at Michigan State University in very quick fashion, getting to his first years with the Lakers. People who were there at the time, including the wonderful Kareem Abdul-Jabbar, discuss lovingly what Johnson brought to the team. They hit a few of the speed bumps, but the first chapter of “They Call Me Magic” and most of the second play a bit too much like hagiography for my taste. I wanted more on the culture of the Lakers and what Johnson did on the court instead of something like a highlight reel.

The second half of “They Call Me Magic” is much stronger because it gives fans a Magic who’s more revealing than we’ve ever seen before. The third chapter focuses almost entirely on his HIV diagnosis and what that meant to his career, home life, and potential fate. It’s very moving to hear how much they worried that he might die, or that his wife and unborn child might have it. And the episode segues eloquently into how the diagnosis changed Johnson’s focus and made him into an important public face for the AIDS crisis. People weren’t sure how to respond to Magic’s diagnosis—and he even considered continuing to play and did so on the Dream Team—and it’s interesting to see such a smart, powerful man trying to navigate what was a potentially deadly chapter in his life. His appearance on “The Arsenio Hall Show” made TV history with a frank discussion of the disease and how he got it and Hall says that Johnson said to him, “You gotta help me live forever.” What a powerful thing to consider—that Johnson was being frank and open in a way that he thought might be his legacy when the disease killed him.

Of course, we all know that Johnson is still around, and the final chapter of the series gets into what he’s accomplished after basketball as a businessman, husband, and father. Both Magic and Cookie let us into their family in ways that sports figures don’t often do. Yes, there are parts of “They Call Me Magic,” especially in the first half, that are a little manufactured to continue a love affair that basketball fans have been having for four decades now, but those shallow segments are overwhelmed by ones that are richly true and vulnerable. Magic was a leader on the court. Earvin has been one everywhere else. 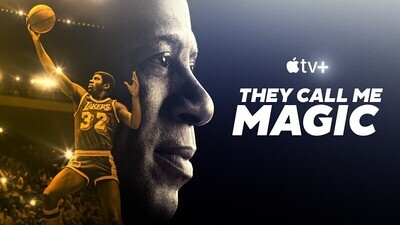