There's Something in the Water

The celebrity-driven documentary is a tricky one. It’s obvious that these famous faces want to talk about something they’re passionate about—they may even have talked about their cause célèbre on a talk show or shared countless links on social media. But when they take the extra step of making a movie about this issue, the challenge for them is not to steal the spotlight from the subject.

That’s the tension that plays out throughout “There’s Something in the Water,” an environmental documentary from Ellen Page and her “Gaycation” collaborator Ian Daniel. The movie is inextricable from Page, who uses her own experiences as a means to personalize the subject. However, her constant presence raises the question if she were not in front of the camera, would this documentary have any chance of finding an audience? Will her message be heard if she isn’t always in front of the camera?

To set the scene, Page and Daniel use her childhood home of Nova Scotia as an example to look at the human cost of environmental racism, or when marginalized communities suffer because corporations dump or release their toxic wastes in their neighborhoods. Or, as Dr. Ingrid Waldron, whose book inspired Page and this movie, explains, it’s when “your postal code determines your health.” Page revisits her happy childhood hometown of Halifax and her pride in Canada’s embrace of universal healthcare, LGBTQ rights and legalized marijuana, but admits that not all is well in our neighbors to the north.

After a quick primer on how corrupt politicians and corporations are still benefitting from the suffering of Black and Indigenous people, Page and Daniel hop in a car and take viewers through three different towns in Nova Scotia to see the fallout for themselves. In Shelburne, they meet local activist Louise Delisle who says a toxic landfill has caused a spike in cancer in her community, where many people die before their time. It’s just 20 minutes from Page’s hometown. Driving around Shelburne, Delisle points out the homes where people have died or are dying of cancer. The landfill has been decommissioned for years, but still its damage continues. Next is Pictou Landing, where Michelle Francis-Denny recounts the harrowing story of how paper mill lied to tribal elders, her grandfather included, and poisoned their local harbor. Tearfully, she leads the cameras to where the plant has continually pumped toxic waste since 1967. It’s a devastating scene of an unnatural water treatment facility that looks like something out of a sci-fi movie—it certainly doesn’t look like anything you’d like to drink. Finally, there’s a stop at the town of Stewiacke, where tribal water protectors are standing up to Alton Gas’ plan to poison its sacred river. They confront politicians like Prime Minister Justin Trudeau and Nova Scotia Premier Stephen McNeil with little support in return, and it’s almost always the same dismaying results time after time.

The directors use their subjects’ backstories to show what these devastated places were like before a landfill poisoned a Black neighborhood’s drinking water and before generations of First Nations families were decimated by toxic waste. “There’s Something in the Water” is strongest when focused on their first-person accounts. It’s perhaps no accident Page and Daniel chose to feature all women-activists, and there seems to be no shortage of amazing women on the front lines of protests, unafraid to take their fight right to the country’s prime minister. There’s no more damning a testimony than hearing how a mere $10,000 would mean the difference between potable drinking water for a community or continued poisoning, and even then, the local government chose to spend almost several that amount on an annual festival. It’s not unlike what’s happening in Flint, Michigan, and countless other poor and/or rural communities.

While Page uses her experience to tie these activists together, I’m not sure she needs to. It’s dismaying to think that the only reason audiences would care about environmental racism is because a white Canadian told them to when the activists’ stories are already so compelling. Whenever the documentary gets really wrapped up in their stories, Page reinserts herself, either by awkwardly entering a home in a messy, handheld shot or having the camera drift over to her horrified reaction to an ecological disaster. Further distracting from some of the film’s more poignant moments is a score that sometimes (but thankfully, not always) incorporates choral chants or harmonized voices, muddling Page’s voiceover message.

But while the documentary has the feel of a scrappy passion project, the message itself remains powerful. Given the chaotic times, “There’s Something in the Water” also serves as a stark reminder that not all governments have their citizens’ best interests at heart. 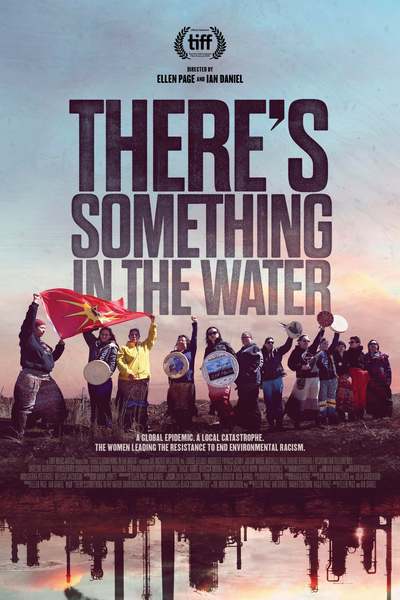