"The Whale" is an abhorrent film, but it also features excellent performances.

It gawks at the grotesquerie of its central figure beneath the guise of sentimentality, but it also offers sharp exchanges between its characters that ring with bracing honesty.

It's the kind of film you should probably see if only to have an informed, thoughtful discussion about it, but it's also one you probably won't want to watch.

This aligns it with Darren Aronofsky's movies in general, which can often be a challenging sit. The director is notorious for putting his actors (and his audiences) through the wringer, whether it's Jennifer Connolly's drug addict in "Requiem for a Dream," Mickey Rourke's aging athlete in "The Wrestler," Natalie Portman's obsessed ballerina in "Black Swan," or Jennifer Lawrence's besieged wife in "mother!" (For the record, I'm a fan of Aronofsky's work in general.)

But the difference between those films and "The Whale" is their intent, whether it's the splendor of their artistry or the thrill of their provocation. There's a verve to those movies, an unpredictability, an undeniable daring, and a virtuoso style. They feature images you've likely never seen before or since, but they'll undoubtedly stay with you afterward.

"The Whale" may initially feel gentler, but its main point seems to be sticking the camera in front of Brendan Fraser, encased in a fat suit that makes him appear to weigh 600 pounds, and asking us to wallow in his deterioration. In theory, we are meant to pity him or at least find sympathy for his physical and psychological plight by the film's conclusion. But in reality, the overall vibe is one of morbid fascination for this mountain of a man. Here he is, knocking over an end table as he struggles to get up from the couch; there he is, cramming candy bars in his mouth as he Googles "congestive heart failure." We can tsk-tsk all we like between our mouthfuls of popcorn and Junior Mints while watching Fraser's Charlie gobble greasy fried chicken straight from the bucket or inhale a giant meatball sub with such alacrity that he nearly chokes to death. The message "The Whale" sends us home with seems to be: Thank God that's not us.

Within the extremes of this approach, Fraser brings more warmth and humanity to the role than he's afforded on the page. We hear his voice first; Charlie is a college writing professor who teaches his students online from behind the safety of a black square. And it's such a welcoming and resonant sound, full of decency and humor. Fraser's been away for a while, but his contradictions have always made him an engaging screen presence—the contrast of his imposing physique and playful spirit. He does so much with his eyes here to give us a glimpse into Charlie's sweet but tortured soul, and the subtlety he's able to convey goes a long way toward making "The Whale" tolerable.

But he's also saddled with a screenplay that spells out every emotion in ways that are so clunky as to be groan-inducing. At Charlie's most desperate, panicky moments, he soothes himself by reading or reciting a student's beloved essay on Moby Dick, which—in part—gives the film its title and will take on increasing significance. He describes the elusive white whale of Herman Melville's novel as he stands up, shirtless, and lumbers across the living room, down the hall, and toward the bedroom with a walker. At this moment, you're meant to marvel at the elaborate makeup and prosthetic work on display; you're more likely to roll your eyes at the writing.

"He thinks his life will be better if he can just kill this whale, but in reality, it won't help him at all," he intones in a painfully obvious bit of symbolism. "This book made me think about my own life," he adds as if we couldn't figure that out for ourselves.

A few visitors interrupt the loneliness of his days, chiefly Hong Chau as his nurse and longtime friend, Liz. She's deeply caring but also no-nonsense, providing a crucial spark to these otherwise dour proceedings. Aronofsky's longtime cinematographer, the brilliant Matthew Libatique, has lit Charlie's apartment in such a relentlessly dark and dim fashion to signify his sorrow that it's oppressive. Once you realize the entirety of the film will take place within these cramped confines, it sends a shiver of dread. And the choice to tell this story in the boxy, 1.33 aspect ratio further heightens its sense of dour claustrophobia.

But then "Stranger Things" star Sadie Sink arrives as Charlie's rebellious, estranged daughter, Ellie; her mom was married to Charlie before he came out as a gay man. While their first meeting in many years is laden with exposition about the pain and awkwardness of their time apart, the two eventually settle into an interesting, prickly rapport. Sink brings immediacy and accessibility to the role of the sullen but bright teenager, and her presence, like Chau's, improves "The Whale" considerably. Her casting is also spot-on in her resemblance to Fraser, especially in her expressive eyes.

The arrival of yet another visitor—an earnest, insistent church missionary played by Ty Simpkins—feels like a total contrivance, however. Allowing him inside the apartment repeatedly makes zero sense, even within the context that Charlie believes he's dying and wants to make amends. He even says to this sweet young man: "I'm not interested in being saved." And yet, the exchanges between Sink and Simpkins provide some much-needed life and emotional truth. The subplot about their unlikely friendship feels like something from a totally different movie and a much more interesting one.

Instead, Aronofsky insists on veering between cruelty and melodrama, with Fraser stuck in the middle, a curiosity on display. 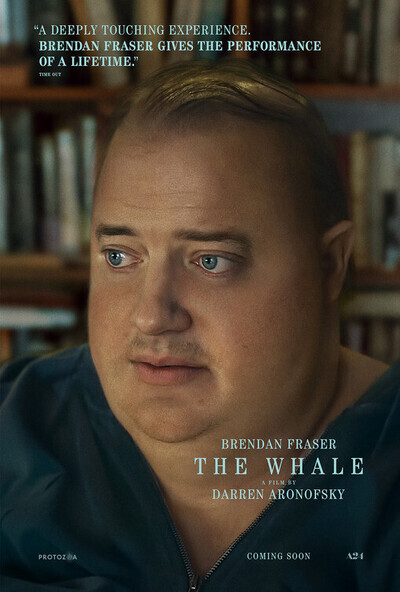 Rated R for language, some drug use and sexual content.