Everyone has a soft spot for a certain movie genre, be it zombies, teen romances, kooky ensembles. A fellow critic and I talked about this once, and he said "Any story about fathers and sons gets to me." For me, it's the underdog-sports genre. Give me "The Bad News Bears." Give me "The Rookie." Give me "Slap Shot." Give me "Hoosiers." And so even though something like "The Way Back" was "made for me," I tried to stay strict with myself in my assessment. What works, what doesn't? Yet I couldn't help but notice the goosebumps covering my arms when the music swelled. This is what movies can do, at their best, draw you out of yourself in spite of yourself. "The Way Back," directed by Gavin O'Connor, is that kind of movie.

This is a sweet spot for O'Connor as a director. In "Miracle" he took a well-known story and made it urgent and thrilling. He focused his attention on a compelling central character, Herb Brooks (played brilliantly by Kurt Russell), and this galvanizes the action. O'Connor brought this power to bear in "Warrior" too, focusing his attention on the relationship between the absent father (Nick Nolte) and his two adult sons. O'Connor is gifted at action too, thrusting us into the middle of the fights in "Warrior," tossing us onto the ice in "Miracle." Even if you're not a sports fan, you can follow the action. "The Way Back" is about a ragtag basketball team at a Catholic high school, and a damaged alcoholic coach (Ben Affleck) who finds a way to force them into being winners, into being better people, even.

Jack Cunningham (Affleck) is a mess. He works construction and spends his nights at a dive bar, where he is a regular. You can feel his thirst the second he gets into his truck after his shifts. When he takes a sip of beer, his eyes close briefly. He needs this. At family gatherings, you can see his sister's disapproval of him, suggesting a long history. But he's in the round of alcoholism: drinks, collapses, hangovers, do it all over again. Once upon a time, Jack was the star basketball player at his high school. But something fell apart for him. When he is offered a coaching gig at his old school, he promptly gets wasted. He can't go back. But he does. And it changes everything for him, and for the students.

A film like this depends on its central character. Just as O'Connor did in "Miracle" and "Warrior," he keeps his eye very closely on Jack. With a script by O'Connor and Brad Ingelsby, the atmosphere is crucial. The lens flares explode across the screen dramatically (the cinematographer is Eduard Grau), creating a vibe of both nostalgia for better days, but also the squinting headache of a constant hangover. Jack strolls into his old high school, and whips the students into shape, immediately recognizing that one of them, Brandon, (Brandon Wilson) is talented. He attempts to put a fire under the kid, forcing him to own his power. At some point, Jack stops drinking.

The basketball games are filmed with a thrilling sense of reality: the fans seem real, the refs seem real, the kids on the other team seem real. O'Connor and editor David Rosenbloom have made a couple of really smart editing choices: you see Jack coaching the kids at practice, and as he details the plays, there's a cut to later in the game, showing the kids executing these same moves. The games feel like real games. I must mention here Rob Simonsen's score, and how well it's integrated. Some scenes go by without music at all, so when the music comes in, it's a cue that something is about to happen. It's a very big score. The film isn't filled with needle-drops of hit songs. (Similarly, Mark Isham's score in "Miracle" is such a huge contribution it's hard to imagine the film without it.) O'Connor does not shy away from the emotion of his films. Instead, he embraces it.

"The Way Back" is, essentially, a redemption arc. Jack is weighed down with disappointment. Affleck is in a very personal zone here. When he gets angry, there's something still bottled up in his beet-red face. There's no catharsis in his rage; it remains poison in his veins. There's also a thrumming sense of self-pity in him, so accurate if you've ever known any addicts. Affleck does not shy away from the character's unpleasantness. He's right in it, with the man's flaws and failures. The script is well-structured. Information is withheld from us until far into the action.

There are some missed opportunities along the way. Jack's such a heavy drinker that quitting cold turkey should have a marked impact on him. It doesn't. When he goes off the wagon, you don't sense how much he has been white-knuckling his abstinence. The tragedy in his past is a bit over-determined as well, but one thing that does work - and doesn't often in movies like this - is his ex-wife (Janina Gavankar) gets to be complicated too.

When I was a senior in high school, the girls' basketball team went on a winning streak. The surrounding community noticed something exciting was happening, and more and more people showed up to the games, people who weren't even in high school. The team went to the playoffs, and our town was whipped into a frenzy. O'Connor captures this feeling. The extras he cast for the basketball games understand this feeling. In Stephen King's novel Under the Dome, there's a section about a girls' basketball team:

"...The game had some divine texture beyond the reach of ordinary players (although sometimes even ordinary players felt it, and were transformed for a brief while into gods and goddesses, every bodily defect seeming to disappear during their transitory divinity), a texture that on special nights could be touched: some rich and marvelous drape such as much adorn the hardwood halls of Valhalla."

If you think that's melodramatic or corny, you don't understand high school basketball. O'Connor does. 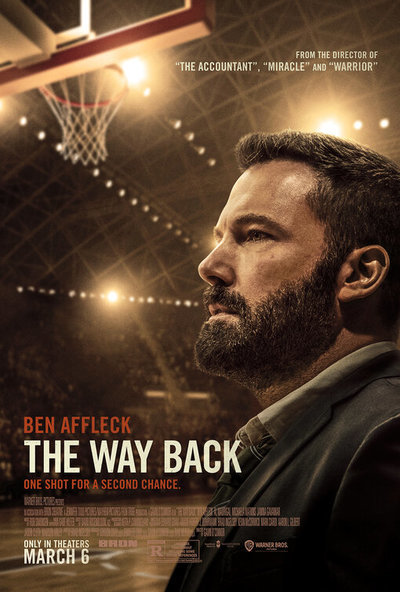 Rated R for language throughout including some sexual references.