On one of the worst moviegoing weekends of the year—go check out our reviews of “Jackals,” “Temple,” and “Goon: Last of the Enforcers” for just a taste of the awful—it was even more disconcerting than usual to hear that "The Vault" wouldn’t be made available early for reviews. Yes, there are films that screen for critics that end up being surprisingly solid—maybe the studio just doesn’t have the confidence they should in it—but it’s more often that they’re trying to hide a piece of junk. So, while I desperately try to approach each film with as much optimism as possible, it was difficult when I sat down to watch “The Vault” to not be a little concerned. Much to my surprise, this genre hybrid has its moments—way more than several of the films this week being made widely available to critics. It won’t change your life, but it won’t make you angry either. Labor Day weekend for a limited and VOD release? That’s almost a positive review.

Sadly, “almost” is as good as I can get for “The Vault,” a film that merges the bank robbery flick with a haunted house movie. Yes, it’s “Dog Day Afternoon” meets “The Haunting.” And while that’s an undeniably fun idea, director Dan Bush (“The Signal”) doesn’t quite know how to pull off either half. Both the heist movie and the spooky flick are underdeveloped with the former lacking the intense dedication to geography that puts you in the middle of the scene and the latter resorting too often to jump scares and undefined rules of the game. And then there’s the ending, which is so resolutely stupid that I suspect the few people who do see this in theaters this weekend will throw their remaining popcorn at the screen.

Co-written by Bush and Conal Byrne, “The Vault” is a (mostly) single-setting affair at what looks like a relatively ordinary bank on what seems like a relatively ordinary morning. A young woman named Leah (Francesca Eastwood, Clint’s daughter) is applying for a job as a teller; another woman named Vee (Taryn Manning) is complaining about checks that shouldn’t have bounced; a local cop (Clifton Collins, Jr.) is flirting with another teller named Susan (Q’orianka Kilcher). There’s a lot of noise coming from outside from a fire down the street, and a trio of firemen enter the bank to make sure it’s secure as well—and then they’re revealed to be robbers, working in conjunction with Leah and Vee. In fact, the two ladies are sisters, backing up their brother, the head fireman/robber Michael (Scott Haze), who needs some cash to get out of a really bad situation. They’re not gonna hurt anyone. They’ll just take what they need and leave.

The problems start when the siblings discover that there’s not much money in this small bank—only about $70k. That’s when another employee named Ed (James Franco) steps in to tell them a secret—there’s a second vault in the basement, and that one’s got millions in it. Of course, there’s a reason no one goes in the basement vault, and the robbers release something ancient and evil when they break into it. Before you know it, people are seeing shapes that don’t show up on the security cameras and doing awfully gory things to themselves. Now, the robbers and employees have to escape something much worse than a federal crime.

Eastwood is a charismatic lead, and the rest of the supporting cast is adequate, but Bush can’t quite figure out what movie he’s making. He needed to co-write and direct a bank robbery film that worked on its own terms, without the hulking ghosts in the basement, but we know that’s not this movie, and so the first act is something of a dull waiting game, waiting for the carnage to kick in. Once it does, I was surprised at how much the leads worked to keep the silliness from verging into camp. Eastwood, Kilcher and Haze sell the confusion and fear of their predicament. And while Franco looks bored too often, his is a smaller role than the poster would have you believe.

Ultimately, “The Vault” isn’t silly enough to be horrendously memorable or tense enough to be effective as the genre exercise it could have been. It falls into that underdeveloped gap in the middle. Maybe that’s why the studio hid it from critics. It wasn’t that it was awful, it was that they forgot they were releasing it. 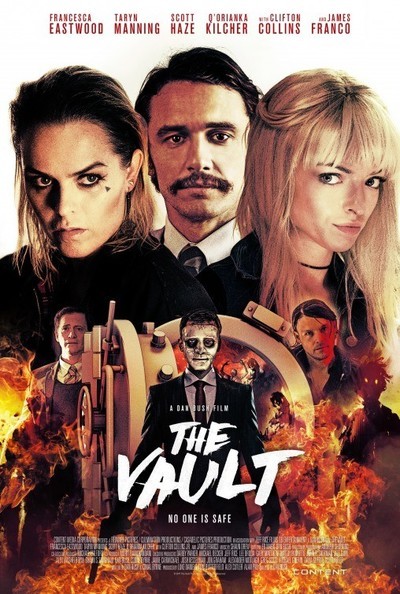