Goon: Last of the Enforcers

Michael Dowse’s “Goon” was an unexpected joy, a clever comedy about a kindhearted but ironfisted young man finding his place in the world on the ice. It was gloriously profane and yet also pretty darn sweet, anchored by a great performance from Seann William Scott and a clever script by Jay Baruchel. It is also one of the last movies I think anybody expected to get a sequel. And it’s clear to see why when you watch the dispiriting, half-asleep “Goon: The Last of the Enforcers,” a movie that lacks the energy, wit and heart of its predecessor and is the kind of project that probably never should have happened.

Scott returns as hockey enforcer Doug Glatt. In the film’s opening moments, he has one of those moments that often face aging athletes—getting beaten, this time literally, by the younger version of you. Wyatt Russell plays Anders Cain, a more overall athletic but also more deeply sociopathic version of Glatt. Cain is always trying to impress his owner father Hyrum (Callum Keith Rennie) and he basically knocks Glatt into early retirement. The career-ending battle could be just what Glatt needed though as Eva (Alison Pill) is pregnant with their first child. Of course, Doug can’t stay off the ice for long.

First, Glatt almost stumbles upon an underground hockey fighting club, in which his former nemesis Ross Rhea (Liev Schreiber) is competing. Imagine hockey with just the fights. It’s more like boxing on ice. Glatt asks Rhea to train him to be a better fighter, and from there he begins a planned comeback and dethroning of the Cain. Baruchel returns as Doug’s buddy Pat in a few scenes, and took the directorial reins this time from Dowse, which is one of the film’s many problems. Baruchel’s a better comic actor than he often gets credit for and a solid writer, but this is a film that doesn’t feel like it has a director. It’s shapeless and lacks the energy of the first movie. You can almost see the actors getting bored. A friend of mine suggested they made the movie because they all just wanted to hang out again, which may be true but even that friendly energy didn’t make it to the screen. It’s a flat, lifeless affair.

Part of the problem is that the characters don’t even feel consistent to the first film. They turned Eva into a plot device in the “Pregnant Wife Who Needs a Responsible Husband” role and even Baruchel’s Pat feels like someone doing a bad impression of the first character. Pat in “Goon” may be profanity-spewing but his swearing habit comes from his love of hockey and his buddy Doug. Here, he’s kind of just a gross asshole, introduced drunk at a party with a boner. He feels like a different character entirely. Even Doug feels dumber, although Scott does the best he can to breathe life into the character again. Only Schreiber’s character feels interestingly developed—he’s turned from the villain into the guy who knows what it’s like to be an over-the-hill enforcer.

Watching “Goon: Last of the Enforcers,” I was reminded of another Seann William Scott comedy hit that turned into an unexpected franchise: “American Pie.” That film not only launched careers and produced three theatrical sequels but spawned a straight-to-DVD sub-franchise of sequels with titles like “American Pie: Band Camp” and “American Pie: The Naked Mile.” You shouldn’t see them. They’re bad. And “Last of the Enforcers” feels made with the same amount of spirit. 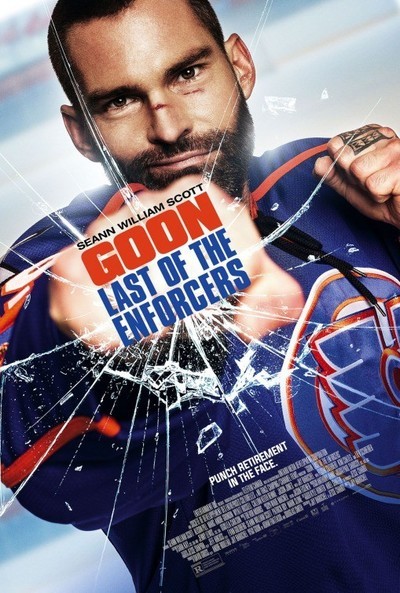 Writer (based on the book "Goon" by)