“Jackals” put me in a foul mood.

Maybe that’s the intention of this lean, mean slab of B-horror trash: to set you on edge and keep you there long after it’s over. If so, director Kevin Greutert (the sixth and seventh “Saw” movies) certainly achieves his goals efficiently, and admittedly he features some artfully startling imagery. But the film’s ultimate nihilism makes the whole exercise seem like an annoyingly pointless waste of time—even for a movie that’s barely 80 minutes long.

Working from a screenplay by Jared Rivet, Greutert gets down to business quickly, revealing a husband and wife and their daughter being slaughtered with scissors in their beds in the middle of the night. The silent assailant catches a glimpse of himself in a full-length mirror after the bloodshed is done: He’s wearing an animal mask.

The meat of the story though—which we’re told is based on true events from March 1983—concerns a different family, one that’s trying to extricate its 20-something son from the same murderous cult that includes the killer from the film’s start. They’ve hired a swaggering ex-Marine named Jimmy (a tatted and stubbly Stephen Dorff) to kidnap the young man while he’s driving along a country road, throw him in a van and drag him back to their comfortable, secluded cabin in the California woods.

“I’m going to ask you to do some of the hardest things you’ve ever done in your whole life,” Jimmy says to prepare them for the ordeal ahead, as if they’re about to conduct an exorcism. And the crazed look in Justin’s eyes as he screams and writhes against the ropes that bind him to a chair suggests he is indeed possessed.

Trouble is, Justin doesn’t want to be deprogrammed. He likes his life in the cult. And the cult members like having him around, as evidenced by the speedy way they track him down and surround the cabin. The sight of them is eerie at first—clad in all black with their various animal masks silhouetted against the headlights that pierce the misty, forest darkness. Every once in a while, one of them lets out a howl, and then the rest of them howl back in response. They’re serious about this whole role-playing thing.

But that’s about all that defines the cult members in this “Straw Dogs”-style showdown. They’re nameless, faceless, voiceless. Such ambiguity doesn’t add to the sense of mystery, however. It actually makes them less intriguing—and less fearsome—as a villainous force. All they want is their man back, and they’re willing to cause massive amounts of bloody carnage to get him. They’re kind of boring in their single-mindedness, to be honest.

Meanwhile, Rivet’s script errs in the opposite direction when it comes to the folks inside the cabin: They’re stuck with clunky expository dialogue. Justin’s family members stand around explaining themselves to each other and airing pent-up resentments while the threat continues to close in on them from all sides. (They also take time to craft makeshift weapons out of kitchen utensils, though, which is clever.)

But it’s clear pretty early on that whatever steps they take to protect themselves will be futile. They’re massively outnumbered, and “Jackals” isn’t exactly a feel-good, come-from-behind underdog story. Besides, Justin is so unrepentant and cruel that it’s a wonder the family doesn’t just give him back. And Greutert, a longtime editor, can only hold the tension of the cult members’ threat for so long.

Something has to give—and when it does, it’s an explosion of bloody torture that’s excruciating to watch. The brutality is punishing—for us, as well—and feels as if it will never end. If that’s your thing, awesome. Maybe you’ll enjoy the savagery. But ultimately, the empty cruelty behind it is just too much to bear. 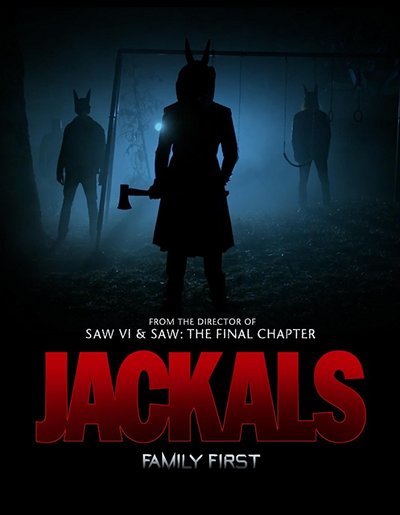