The Pope and a Jesuit cardinal walk into a park. As they stroll the grounds of the Papal summer home, the cardinal, Jorge Bergoglio (Jonathan Pryce) attempts to serve his resignation papers. Pope Benedict XVI (Anthony Hopkins) either ignores his request or amusingly deflects it by involving Bergoglio in a conversation about their personal differences. The Pope is far more conservative, even questioning if it’s appropriate for the Argentinian Jesuit to partake in his country’s national dance, the Tango. He also alludes to a prior conversation between the two in the bathroom at the papal conclave, where they spoke not of the Alpha and the Omega but the ABBA. During this sequence, the first of several sharply written bits of banter in Netflix’s “The Two Popes,” one gets a distinct “Odd Couple” vibe from the duo. I almost expected a play on that TV show’s famous opening narration: “Can two Catholic men share the Papacy without driving each other crazy?”

Of course, the two men don’t share the throne of Saint Peter; Pope Benedict XVI’s resignation left him with the title of “pope emeritus” while Bergoglio is now known as Pope Francis, the current Pope. Both of their legacies feature sentences that contain the words “first” and “first since”—Pope Francis is the first non-European Pope since the 8th century and the first ever from South America; his predecessor is the first to resign his position since 1415. Rather than dwell on these historical details, screenwriter Anthony McCarten and director Fernando Meirelles instead craft scenes that humorously play off what we already know about the eventual paths the two men will take. The first scene at the summer estate is a fine bit of comic frustration simply because we know Bergoglio is never going to get that paper signed.

Essentially a two-hander, “The Two Popes” could have been a dry, somber affair like “Frost/Nixon” (which I liked, by the way). But the creative teams on both sides of the camera project a loose, sometimes flashy tone onto the material and the resulting joy is infectious. Meirelles, who directed fast-paced, jaunty takes on serious material like “City of God” and “The Constant Gardener,” employs several stylistic touches that draw attention but do not distract. His choices run the gamut from effectively using crisp, black-and-white cinematography while depicting Pope Francis’ past in Argentina to the absurd, out-of-left-field soundtrack appearance of “Dancing Queen” that’s both a needle drop and a callback to a prior moment in the film. McCarten’s script has Pope Benedict XVI wearing a FitBit-style device that constantly scolds him to “keep moving” and his dialogue is a meaty, dramatic match for the film’s two main performers.

And what performers we have here! I love movies like this that are basically two character affairs whose actors have clearly come to play. If the performers are at the top of their game, the results are often fascinating master classes of give-and-take, of knowing when to upstage and when to fall back. Those choices become as intriguing as the characters that result from them. And when Meirelles and cinematographer César Charlone dwarf the two actors in the frame to show the enormity of some of the Vatican rooms they inhabit, their performances scale down as well. Hopkins and Pryce are veterans of stuffy, prestigious fare as well as far less respectable crowd-pleasing attempts that border on the preposterous. “The Two Popes” falls somewhere in-between those two extremes, sometimes leaning in the latter direction but never threatening to falsely court prestige by drifting too far toward the former.

Though Hopkins’ presence looms larger simply by virtue of his stature, Pryce has the meatier role here. Ably assisted in flashback by Juan Minujín, who plays Bergoglio as a young man, Pryce shoulders much of the film’s emotional weight. Pope Francis has a sense of regret about past mistakes that influences his philosophies as an older man; Pryce plays those scenes with a heaviness of heart that is quite touching. He’s also more blatantly funny, though Hopkins has a drollness that’s delectable. “It is a German joke,” says Pope Benedict XVI after an attempt at humor falls flat, “it doesn’t require a punchline.”

Hopkins runs a small undercurrent of mischievousness under his character’s grumpy exterior. You can see it in his eyes every time he sees a chance to steal the scene from his co-star. Pope Francis ordering a pizza from the “best place in Italy” is amusing enough, but when his dinner partner attacks a slice with the voraciousness of Hannibal Lecter, you can almost see the scoreboard marking a home run for the guy who played him.

Despite its desire to entertain while crafting a love letter to Pope Francis, “The Two Popes” doesn’t shy away from some of the more unsavory elements of its time period, though some viewers may justifiably feel it doesn’t devote enough attention to them. The Catholic Church child abuse scandal is given some airtime, but Meirelles makes a stylistic choice of blocking dialogue in one scene that I thought undercut the seriousness of this topic. There are also interview scenes where people call Pope Benedict XVI “a Nazi.” While it’s understandable that a South American filmmaker would focus more on the backstory of the first Pope from his continent, I wish Pope Benedict XVI’s character had been expanded in similar fashion rather than having him be more symbolic of the old man’s lament we’ve seen more thoroughly in “The Irishman” and “Pain and Glory.”

Still, as two-handers go, “The Two Popes” is a great one. Its slightly over two hour runtime flies by without lagging. The scenes involving how Popes are selected offered insight into the politics of the process and the editing kept those moments from becoming dull. Overall, the film is superbly acted and a lot of fun to watch, which I suppose is not enough hardcore critical substance to hang three and a half stars on, but there you go. 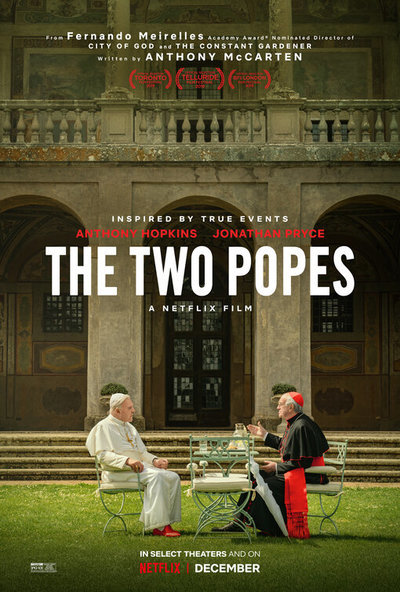