Veteran French director Anne Fontaine approaches a spiritually and emotionally complex real-life slice of history with deftness and understated drama in “The Innocents.”

The cool, observational style that has marked much of Fontaine’s work, including the lush biopic “Coco Before Chanel” and the deliciously tawdry “Adore,” serves her well here. Working from a sensitive script by Sabrina B. Karine and Alice Vial, Fontaine lets the inherent horror of the film’s situation speak for itself, which makes it that much more startling. And she draws finely nuanced performances from her ensemble cast, especially stars Lou de Laâge, Agata Buzek and the great Agata Kulesza (“Ida”).

“The Innocents” begins at the end of World War II in Poland, December 1945. Serene, austere Benedictine nuns sing sweetly in the quiet stillness of morning—until a piercing scream echoes through the stone hallways, sending a chill. Turns out, it’s coming from an extremely pregnant, young nun who’s on the verge of giving birth—and she’s not alone.

One of the more daring sisters dashes into town to fetch a doctor, trekking through forest trails and war-torn streets, and the dusting of snow that accumulates on the hem of her habit leaves a vivid impression of cold and isolation. The no-nonsense Mathilde Beaulieu of the French Red Cross (de Laâge) initially is reluctant to leave her busy post to help. But once she arrives at the convent, she’s shocked to discover that at least a half-dozen young nuns also are in advanced stages of pregnancy.

As the Reverend Mother (Kulesza) and her right-hand woman Maria (Buzek) matter-of-factly explain it, Soviet soldiers invaded the convent and repeatedly raped the women as the war was ending. They can hide their bulging bellies under their robes, but only for so long. Reverend Mother views these pregnancies as a source of great shame and seems far less concerned about the psychological trauma these women must be experiencing. As she grudgingly agrees to let Mathilde assist with the deliveries and after care, she insists the births must remain a secret, and promises to arrange adoptive homes for all the newborns immediately.

Fontaine explores this fraught situation from every angle and with great humanity. Mathilde, for starters, is a stoic non-believer. She is all business—the voice of reason in a place of sacred mystery. And while she initially accepts the sisters’ blessings and prayers politely, she eventually opens herself up to the powerful role faith plays in their lives. When de Laâge smiles or cries even slightly, it’s a revelation, and the vaguely romantic relationship that develops between her and a smart, self-deprecating fellow physician (a heartbreaking Vincent Macaigne) allows her a few stolen moments of much-needed joy.

But the nuns themselves also get the opportunity to evolve in unexpected ways. They may all look alike at the start with their uniformly plain appearance, but each reacts to the prospect of being a mother differently—especially given the devastating way they became pregnant. Most were virgins before they were violated; others had known men before coming to the convent and speak longingly of the freedom of their previous lives. One nun giggles nervously during her examination while another recoils in fear and shame.

Finding their faith shaken, however, is a nearly universal concern: “If it happened, that means He wanted it,” one nun wonders aloud to Mathilde. “What does He want me to do with it?” “The Innocents” is the rare film that examines the nature of religious belief in a non-judgmental way; actually, it’s more about strong, brave women protecting each other and doing what they must to survive. The starkness of the setting and the spare, fluid camerawork from cinematographer Caroline Champetier make the drama of their decisions pop that much more in ways that are both shocking and enlightening.

And although the ending wraps things up in a quick and tidy way that’s jarring, given everything that preceded it, “The Innocents” still represents a welcome change: a war movie by women, about women. 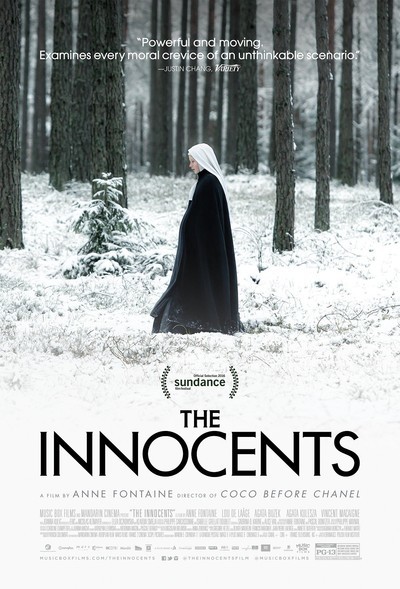 Rated PG-13 for disturbing thematic material including sexual assault, and for some bloody images and brief suggestive content.

Writer (based on an original concept by)