In British spy thriller "The Take," Idris Elba stars as a CIA agent who runs roughshod across Paris in order to stop a group of French criminals. Agent Briar (Elba) is more Dirty Harry than James Bond though: a CIA psychological profile aptly sums up his bed-side manner as "lacking interpersonal empathy." He's not just a tough guy: he's a bull in a China shop, and he makes no apologies for his dickish behavior. Briar would be detestable if he were played by almost any other actor. The scene where he clotheslines American pickpocket Michael Mason (Richard Madden), draws a gun on him, and boasts "Yeah, muthafucka, now what!" perfectly exemplifies his nastiness. But because the line is spoken by Elba, I almost stood up and did a touchdown dance. And I didn't want to take my shirt off and cheer because of the preceding rooftop foot chase, nor the slipshod action choreography: Elba is just really charming.

This presents a problem since "The Take" is just really lousy. Co-writer/director James Watkins ("The Woman in Black," "Eden Lake") and Andrew Baldwin make Briar an indestructible jerk who answers to no one, and is generally as cuddly as a cactus. This isn't just a matter of haphazard characterization and dialogue: the whole film is designed to make you see Briar as a messianically impervious ugly American, the only person who can stop a group of dissembling criminals from unleashing chaos on an unsuspecting Paris.

Briar teams up with Michael and Zoe Naville (Charlotte Le Bon), an Occupy-style protester who becomes a reluctant terrorist, to stop a shadowy group that manipulates working-class protesters in order to create a diversion for their covert crimes. Briar's enemies do everything to rouse a mob, from filming fake footage of a policeman beating a foreign suspect to actively inciting protests using Anonymous-style viral videos. Michael and Zoe are both hapless victims of circumstance and therefore innocent. Briar is therefore the only one smart and capable enough to stop the baddies, as he explains to Michael when he complains, "I thought we were a team," and Briar sneers, "Sorry, you're not Ivy League."

It gets worse: Briar is needlessly brutal, like when he snaps one crook's arm and tosses him aside in order to dispatch the next blackhat-wearing thug. He tells Zoe, "I don't wanna hurt you," but only after he punches her in the gut after disarming her. I repeat: he disarms a knife-wielding suspect, and then punches her in the gut a second later. You might want to excuse Briar by claiming that he's just reacting in the heat of the moment. Well, how about the critical confrontation where he shoots one of his allies, who at the time is being held captive by a baddie, in order to pre-emptively take away his adversary's bargaining chip? "Now what," Briar growls. Again, I almost ran into the street and high-fived the nearby hookah bar's patrons.

But I didn't, thankfully. Elba is cool enough to make steering with one hand while dodging a hail of bullets look feasible. He has an aura of implacable cool that you want in inexplicably suave cro-magnon man-of-action types, the kind that Bruce Willis or Sean Connery made their careers playing. But do you really want to cheer a hero whose allies are essentially overgrown children who only slow him down? Hell, why would you want to root for anyone in a movie where Occupy-ish protesters are treated as clueless pawns, and the only person strong enough to save the world is a mean-spirited American? "The Take," originally titled "Bastille Day," is the kind of cynical entertainment that will leave you feeling like a mark. It's an icky wish-fulfillment narrative: watch the big stwong American (played by a Brit) save the day when the ineffectual French police can't do anything. See him blow past his questioning superiors and get results despite their warnings. Cheer him on as he operates completely without oversight, just like James Bond only he punches women in the stomach and then tells them, "I don't wanna hurt you." Somewhere, Ian Fleming is blushing furiously.

The only good thing that can be said about "The Take" is that its creators aren't fully committed to their scenario's more lamentably chauvinistic ideas. I can't recommend Elba's performance because it left me feeling cheap and used. Elba's magnetic physical presence delivers so much without doing much of anything. But his fans deserve so much better than a couple of dumb quips and a little ultra-violence. 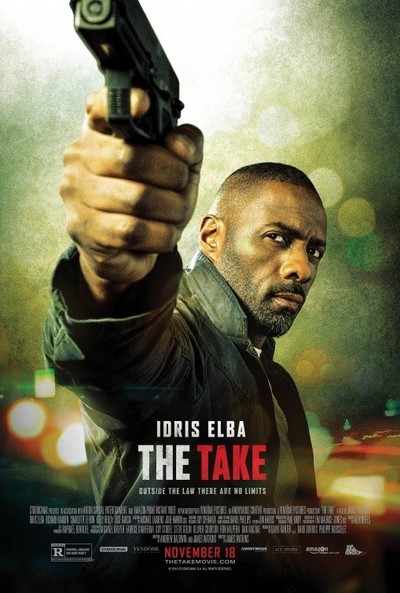 Rated R for violence, language and some nudity.