The Secrets We Keep

While I rather doubt that co-writer/director Yuval Adler pitched his new picture as “'Death and the Maiden' meets ‘Leave it to Beaver,’” that sure is what he ended up with, conceptually at least.

In “Death and the Maiden,” you may recall, a traumatized woman played by Sigourney Weaver meets a man she believes tortured and raped her during a repressive previous regime in an unnamed South American country. She then takes him hostage and tries to force him to confess to his crimes; he claims innocence. Here, it’s small-town U.S.A. in 1959. A movie theater marquee helpfully fixes the year with signage for “North by Northwest” and “4D Man.” A new refinery has just opened, and local physician Lewis (Chris Messina) is happily doing checkups of the incoming workingmen.

Lewis’ wife, Maja (Noomi Rapace), notices one of said laborers, and freaks right out. Barely pausing to reflect, she follows the man (Joel Kinnaman), whom she remembers as “Karl,” walking from the plant. She gets out of the car and walks up to him and hits him in the face with a hammer. Like the guy on the TV show said, “I love it when a plan comes together.” She throws the large man into her trunk (yeah, don’t ask me either—maybe it’s that super-adrenaline thing that makes moms lift entire cars off their kids or whatever) and brings him home and into the basement.

When she informs Lewis of this, he folds like a cheap suit and becomes her accomplice. She’s determined to get the truth out of her captive, and in flashbacks, we learn why. She and her sister and others were set upon by German soldiers in the war, and Maja was raped, her sister raped and murdered. She recognizes this man, 15 years later, as her assaulter.

This movie examines disturbing issues in the most unhelpful way possible. Its approach to character is substantially less profound than that of the EC Comics horror stories the movie frequently resembles.

It can’t be said that Rapace phones in her performance. But the way she glowers, paces, stomps around, and says things like “You will never see your family again” so often recalls her work as Lisbeth Salander in the 2009 film of “The Girl With The Dragon Tattoo” that she can certainly credibly be accused of Skypeing it in.

And while Chris Messina is a capable comedic actor, he’s utterly lost here. The dialogue concocted by Adler and collaborator Ryan Covington doesn’t help. Coming home from work to find Maja’s captive with fresh wounds, he protests, “We were supposed to do everything together! You tortured him while I was gone?!” To which Maja responds, “You call that torture?” It’s the most inadvertently funny movie talk since, I think, the deathless “You liked your mom a lot, didn’t you?” line in Brian De Palma’s “Dressed to Kill.”

Kinnaman does his level best with a beyond-impossible character (“Sure, he SEEMS innocent, but you know how shifty those Nazis can be” is a point the movie telegraphs relentlessly) and Amy Seimetz brings credibility to the role of the wife of the missing man. But the morally reprehensible conclusion—which in retrospect seems the movie’s entire reason for being—renders the entire enterprise a write-off. 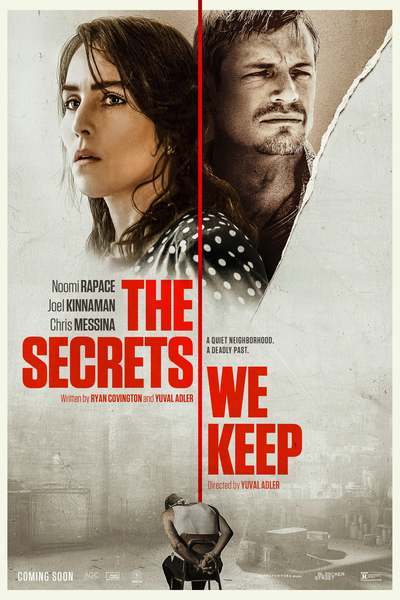