“The Score” is an ambitious effort, a movie that is both a tense crime drama and a musical. Skillful attention has been paid to both elements by writer/director Malachi Smyth and a strong cast. But these elements are never integrated enough to become organic, and never come together to create a satisfying whole.

For the second time this year, Johnny Flynn plays a hoodlum with an impulsive sidekick in a twisty crime story almost completely in one location. But “The Outfit” was intricately plotted and directed with propulsive dynamism, possibly in part because it was not interrupted by singing monologues. In “The Score,” Flynn, who also wrote the movie’s songs, plays Mikey, who is planning a deal with some powerful new gangsters for the first time. “Up to now, we’ve been nobodies,” he tells Troy. “I’ve been the nobodies’ gofer,” Troy responds. But we see that there is more to Troy than Mikey notices, not because he brags about the one good grade he got in English or because he can do the math on the returns they should get from the new partners, but because of the way he muses about the many meanings of the word “score.”

Driving with him to the meeting place is Troy (Will Poulter), the younger brother of Mikey’s long-time partner Derek, who is no longer available because he is in prison. Half of the 20,000 pounds in their bag would have been Derek’s, but is now Troy’s. As they drive, Mikey expresses concern about Troy’s ability to participate in a deal of this level, denigrating his intelligence, especially after Troy gets into a fistfight with two men at a gas station because he thinks they might want to attack him.

Troy wonders how Mikey knows he can trust these new partners. “They’re professionals,” Mikey assures him. But Troy becomes more concerned after they get to the meeting place, a little café. A handful of customers come and go, but none of them are the ones they are waiting for.

This gives Troy a chance to spend time with the café’s only employee, a waitress/cashier named Gloria (Naomi Ackie, soon to star in a Whitney Houston biopic). There is an immediate connection between them.

Poulter and Ackie have great chemistry and bring many layers to their performances. And there are some smart ideas behind this film. It has echoes of Waiting for Godot and “In Bruges” as the two men, one a bit cleverer, or at least he thinks so, wait for something that may be dangerous.

The difference in tone between the constricted indoors and the lush, boundaryless outdoors is well-handled, with Troy and Gloria able to connect, laugh, and dream. Stay through the credits to see more of them goofing around on a rowboat. And the music is not what you might expect. It does not move the story along as we are used to in musicals. The songs are more like interior monologues about uncertainty and yearning. The lyrics have little to do with what is going on; indeed, they have a distinctly folkloric, timeless quality, using words like “I’m burning for thee” and with references like John Barleycorn. The script and the lyrics reflect a love of language, from the discussion of the many meanings of “score” to Troy’s unexpected wit. He is quick in a fight, whether verbal or physical and there are sharp exchanges between Troy and Gloria that show us how quickly they can discern that they are going to be special to each other. There is an encounter with a photographer who wants to take a picture, asking, “May I make art out of great and tragic beauty?” He says he can make them immortal, eternally youthful, but Troy and Gloria know he cannot change their reality. The question is whether they can.

Some of the twists do not pay off as well as the movie wants them to, and the songs weigh down the story more than they add to it. But while Smyth does not succeed, in the photographer character’s words, by making art out of great and tragic beauty, "The Score" does leave me interested in seeing what he will do next. 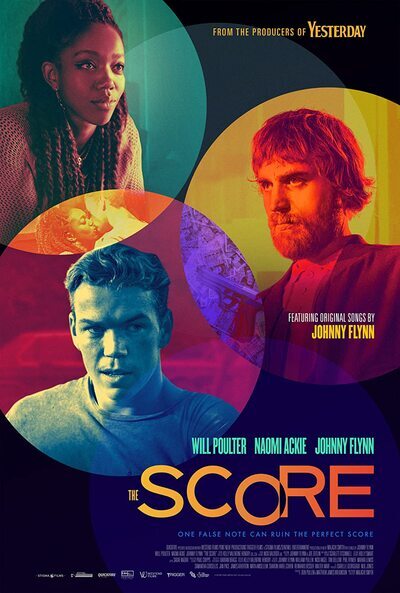 Will Poulter as Troy