Much as Cormac McCarthy did in "The Road," David Michôd examines what would happen to society after a complete structural collapse in "The Rover." What separates his film from the numerous what-if examinations of the genre known as post-apocalyptic is a focus on the human condition instead of setting. It’s not just that supplies are limited and legal repercussions a distant memory, it’s the question of how life goes on and what a world without basic commerce or laws does to mankind.

It makes it tough. "The Rover" is a bleak, brutal film; at times, its monotony can be draining. Ably aided by the jarring chords designed by composer Antony Partos (not unlike the unsettling work by Jonny Greenwood on "There Will Be Blood") and cinematography by Natasha Braier that always places our characters in the context of a bleak landscape, Michôd finds a tonal consistency in "The Rover" that makes its repetition forgivable, and even effective. It doesn’t let up because it shouldn't let up.

In an interesting screenwriting decision, the two major events that really drive the action of "The Rover" take place before the credits; a nod to the fact that this is a story about the aftermath of "the collapse" and not the collapse itself. Eric (a gruff, nearly dead-eyed Guy Pearce) walks into what I suppose is a bar in the middle of the outback. As with all establishments in "The Rover," the few occupants are armed. Music blares. Eric sits. One gets the impression that he could sit there for hours.

The relative "peace" of the moment is shattered when a truck carrying three men flips over outside. The trio—Archie (David Field), Caleb (Tawanda Manyamo), and Henry (Scoot McNairy)—find their vehicle upright but stuck. Since they have clearly come from something violent and dangerous (Henry has been shot), they need to move quickly. Archie smashes the window to Eric’s car, hotwires it, and his two mates jump in. When Eric sees that his final possession has been stolen, he wrenches the truck from where it was stuck and pursues.

Eric gains a potent ally in his quest to retrieve his car when he crosses paths with Rey (Robert Pattinson), Henry’s brother. Rey was presumed dead and left behind by Henry in the firefight that took place before the crucial car swap. Rey is a little dim-witted, played by Pattinson as a series of ticks and stutters that could annoy some but I found effective. For one to believe that Rey would ally with someone like Eric, who is clearly going to kill Rey’s brother, one needs to believe that Rey wouldn’t ask too many questions. And that he would be crushed himself by being left behind by the one thing he had left in the world.

While Eric and Rey may not seem likely travelling companions, they are two men whose final possessions in a world of increasing desperation have been stolen. For Eric, it was his car. For Rey, it was his brother’s love. Michôd wisely doesn’t spend too much time defining the terms of his post-apocalyptic vision, allowing his characters and their needs to define it for him. And Pearce and Pattinson rise to the challenge, the former finding the soul of a man who can barely remember happiness—it’s the moments in which Eric starts to trust Rey that seem to startle him more than pain or violence—and the latter conveying the desperation of a man who may not know a lot but knows he can’t make it on his own. If his brother left him behind, he might as well partner with the man tracking him down.

It’s the images of "The Rover" that linger—a truck flipping by a window, a man collapsing under the interrogation of another, a gun sale that ends in violence, the climax. Most of all, it’s an image of two unlikely travelers walking down dusty roads, looking for any sort of societal structure, old-fashioned hope, or even just a night’s sleep that isn’t ended by a threat, but knowing with every step not just how much was lost in the collapse but that they still have to go on. 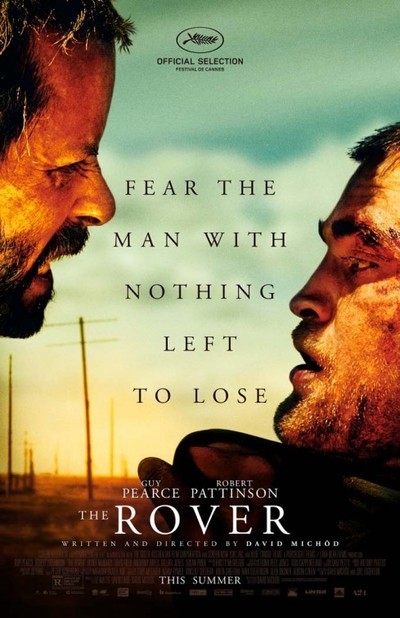 Rated R for language and some bloody violence.