I’ll be honest. While I really do try not to form any opinion at all before watching a film, I approached Netflix’s “The Ridiculous 6” with some understandable trepidation. The stories of a script so racist that several of the Native Americans involved in the project walked off the set didn’t exactly fill me with hope, and Sandler’s comedy track record has been spotty at best, somehow getting even lazier as his career has devolved into getting studios to pay for his vacations (“Just Go with It,” “Blended”). When Netflix decided to not screen it for TV or film critics before it premiered on their streaming service today, it felt like the final straw. Little did I know how bad it would be. The combined –isms of a script in which a Native American character is named “Beaver Breath” are overwhelmingly unfunny enough, but it’s really only one aspect of the monumental failure on display in a film that is almost bafflingly bad.

Where do we begin? The recurring joke about a burro with diarrhea that can spray across the room? The extended bit in which a man scoops out his right eye? The character who is supposed to be so dumb that he thinks women poop babies and says “canty-lopes” and “panty-cakes”? The fact that Vanilla Ice plays Mark Twain and actually says, “Make it rain like Twain” as he antes into a poker game? You read that right—Vanilla Ice plays Mark Twain. How about the multiple occasions in which you can see people like Blake Shelton and Will Forte look around and basically say, “Can you believe we’re getting paid for this?” It’s like someone made a bet that they could take money from a major company like Netflix and do the absolute bare minimum with it.

The best place to start is probably with Adam Sandler’s half-asleep, horrendous performance—the worst of his career—in the lead role of Tommy, aka White Knife, a man raised by the Apaches to have superhuman fighting skills. Sandler can’t decide if Tommy should be the stoic, leader of this gang of misfits or the wacky Native American stereotype he likely first conceived him as, and so he makes no choice at all outside of "sleepy." He can’t hide his disdain or complete lack of interest in the project. I get that Sandler is making movies pretty much just to keep his friends employed at this point, but would it be too much to ask to see an ounce of acting effort?

Tommy’s journey begins when he meets his father, Frank Stockburn (Nick Nolte), just before the old man is kidnapped by a bad guy named Cicero (Danny Trejo). He leaves his tribe to find his dad, discovering along the way that Frank was a busy man and Tommy has five half-brothers: Ramon (Rob Schneider), Lil Pete (Taylor Lautner), Herm (Jorge Garcia), Danny (Luke Wilson) and Chico (Terry Crews). They form “The Ridiculous 6” and set out to save their newly-discovered patriarch.

To say that Sandler and Tim Herlihy’s script is “episodic” would be an understatement. It’s a series of scenes only loosely connected by cast and location. I’ve seen episodes of “Saturday Night Live” in which the sketches seemed more of a single piece than parts of this film. One minute, they’re learning how to play baseball from John Turturro; another minute they’re playing poker with Vanilla Ice, David Spade and Blake Shelton. It’s like someone put ideas for Western-themed sketch comedy on a board and then Sandler threw darts at it to determine its order. The film has no flow, no rhythm, and absolutely no reason to be 119 minutes.

And then there’s the broad racism and misogyny of the piece. After the controversial walk-offs, Netflix claimed that this was “satire.” It’s not. There’s nothing satirical about Sandler’s bad Native American accent (which totally comes and goes, by the way) or Schneider’s Hispanic caricature. Saying that this is satire is like the drunk guy at the bar telling you how many black friends he has after telling a racist joke. Don’t fall for it.

There are a pair of good-to-great Westerns coming out in the next few weeks in theaters that should satisfy your need for gunslingers and horse-riding. Much has been made of the impact that Netflix has had on the television landscape. Given the fact that “The Ridiculous 6” is the first of a four-picture deal with the company, they seem to have little interest in making the same impact in the world of film. 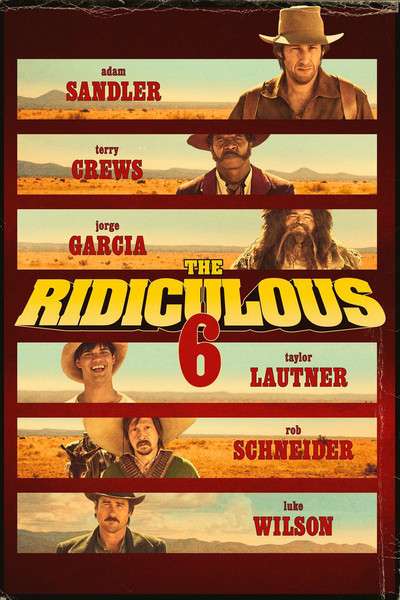 Will Forte as Will Patch