The most shocking revelation to come from the latest Adam Sandler movie, "Blended," has nothing to do with any gross-out joke or adolescent gag, nothing to do with projectile vomiting or messy excrement or children behaving in wildly inappropriate ways in the pursuit of a cheap laugh.

Rather, it’s the fact that "Blended" isn’t completely terrible. I mean, of course it’s terrible, but a certain level of care appears to have been taken here compared to Sandler’s many recent attempts at "comedy."

The bar is just so low, people. It’s just hovering there above the ground.

Here is the main difference between "Blended" and his other output over the past several years, slapped-together efforts like "Just Go With It," "Jack and Jill," "That’s My Boy" and the "Grown Ups" movies: There’s a vague sense of tonal consistency. Whereas so many of his films are just unabashed raunchfests until the very end, when they shoehorn in some false, gooey sentimentality, there exists in "Blended" a genuine through-line of familial suffering and perseverance. A decent movie might actually be buried here somewhere deep, deep down. The world will never know.

Another element that makes "Blended" tolerable is Sandler’s easy chemistry with Drew Barrymore, his co-star in 1998’s "The Wedding Singer" and 2004’s "50 First Dates." After all these years, Barrymore still has an unflappably sunny on-screen presence, and she and Sandler banter with each other comfortably. ("Blended" director Frank Coraci also directed them together in "The Wedding Singer.") Again, the glimmers of possibility are evident, and they are frustrating.

Essentially, though, this is yet another example of Sandler using the excuse of making a movie to go on a lavish vacation with his friends. In "Just Go With It," the characters visited Hawaii. In "Jack and Jill," the escapades took place on a cruise ship. Here, Sandler, Barrymore & Co. travel to the luxurious Sun City resort in South Africa for a trip tailored to new families coming together. We get no sense of what Africa (or Africans) are actually like; instead, we see overly amorous, CGI rhinos cavorting to provide a punch line.

How they all get to Africa is the result of a series of plot contrivances in the script from Ivan Menchell and Clare Sera. Barrymore and Sandler have the opposite of a meet-cute over a terrible blind date. Barrymore’s Lauren is the uptight, divorced mother of two boys; Sandler’s Jim is the schlumpy widower father of three girls. They keep running into each other in their quiet, suburban town—and bickering—until they eventually end up at the same African resort, sharing the same suites with all five of their kids. What are the odds?!

Lauren is flummoxed by the chronic masturbating of her older son, Brendan (Braxton Beckham), and the Little League tantrums of her younger son, Tyler (Kyle Red Silverstein). Meanwhile, Jim dresses all three of his daughters in choppy, pageboy haircuts and warm-up suits courtesy of his employer, Dick’s Sporting Goods, in a bit of overly conspicuous product placement. There’s 15-year-old basketball star Hilary (Bella Thorne), who’s tired of being a tomboy; middle daughter Espn (Emma Fuhrmann, who provides the one genuinely poignant moment in the whole film), who was named for the sports channel and who still talks to her deceased mother; and the youngest, Lou (Alyvia Alyn Lind), who looks like an angel but talks like the devil.

Is it possible that these boys are in need of a father figure and the girls could use a little maternal guidance? Jim and Lauren’s roles—and their potential—are obvious, but "Blended" has zero faith in its audience and feels the need to spell out every single development and emotion, right as they’re happening on screen in front of us. Often this comes in the form of an omnipresent Greek chorus of African singers, led by an overly caffeinated Terry Crews and his impressive pectorals.

Wendi McLendon-Covey does the best she can to bring a shred of unpredictability to her role as the obligatory, wisecracking best friend—although a crass, running bit in which she and Lauren are mistaken for lesbians isn’t even funny the first time. Similarly, longtime Sandler friend and fellow "Saturday Night Live" alum Kevin Nealon gets stuck in a flat, repetitive gag in which he and his buxom and bubbly new wife (Jessica Lowe) make out with each other incessantly.

And Sandler himself allows some of his dramatic instincts to shine through in a few scenes—the kind that made his performances in "Punch-Drunk Love" and "Funny People" so unexpected and welcome. Especially when he’s dealing one-on-one with the kids—both the boys and the girls—there’s a naturalism and (dare I say?) even some substance that’s so often lacking elsewhere.

That actor is in there, somewhere. Perhaps Sandler will actually challenge himself again one of these days and set him free. 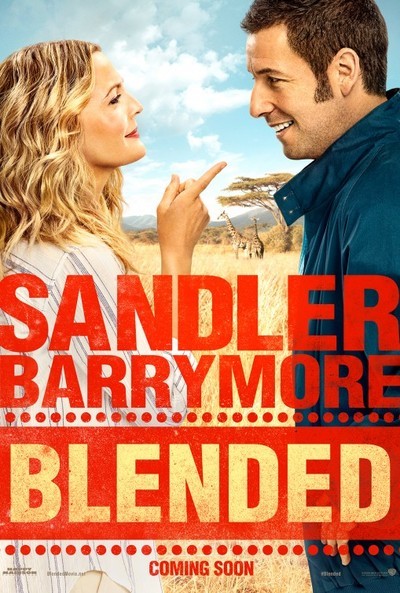 Rated PG-13 for crude and sexual content, and language