There was a period spanning from the near-mid 1990s to the early 2000s when a particular kind of Hugh Grant movie ruled the romantic comedy world. I don’t mean every single Hugh Grant movie, but quite a few Hugh Grant movies, mind you. I call them the “Redeemable S**ts” films. That is, they feature Mr. Grant at his slickest and most glibly charming, except he’s a terrible-to-awful cad (but not to a Ted Bundy extent, of course, and thankfully) except also that he can be saved, and it’s only through forced exposure to and interaction with Better People that he can be saved.

This formula, which arguably reached its commercial and, um, artistic peak with 2002’s “About A Boy” drives Grant’s latest picture, “The Rewrite, “ which was written and directed by Marc Lawrence, who also created 2007’s “Music and Lyrics,” an intermittently diverting rom-com co-starring Drew Barrymore that suggested that maybe a breather from the tried and true might be in order. Unfortunately for Grant, that breather consisted of the universally face-palmed 2009 “Did You Hear About The Morgans” and the misbegotten Wachowski literary adaptation “Cloud Atlas” in 2012. “The Rewrite,” in which Grant plays a once-acclaimed, now down-on-his-luck Hollywood screenwriter compelled to head east and teach a scenario-crafting class at a university in remote, cloudy, fine-cuisine-challenged Binghamton, New York, must have felt as cozy as a favorite sweater to the actor.

And indeed, he gives great Hugh Grant cad once he touches down in the college town, immediately insulting Jane Austen to an icy department head (Alison Janney) whose specialty is Jane Austen, bedding down a comely student (Bella Heathcote) even before convening his first session, advising a “Star Wars” nerd to join a frat, and dribbling condescension on a plucky single mom who’s going to school to improve herself but who may in fact have some real talent.

Given that the aforementioned plucky single mom is played by Marisa Tomei, you have an idea where all this is going to end up. And your idea is likely right, although I have to admit I half-lost a bet with myself I made thirty-five minutes in as to what the big third-act turnaround was going to be. I say “half-lost” because I was correct in terms of the fundamental principle the storyline was bound to uphold. As predictable as it is, and as sometimes cloying as a few of the movie-insider jokes can get (“Reynolds or Gosling?” one starstruck student breathlessly asks when Grant’s character alludes to a “Ryan” having some interest in a fictitious project he’s bragging about), this movie earned my “almost good” rating of two and a half stars on account of the indeed plucky and winning work of the cast, which also includes J.K. Simmons and Chris Elliott as campus “types.” Each has an amusing moment or three, they all gel pretty well, and they keep the movie watchable as it hops from one sweet-spot-hitting-cliché to another. By no means watch this if you’re looking for a nourishing cinematic experience. But if your idea of a cozy rom-com is an old Hugh Grant one, this has some cine-comfort-food-carbs for you.

(Ed. Note: The town of Binghamton was misidentified in an earlier version of this review.) 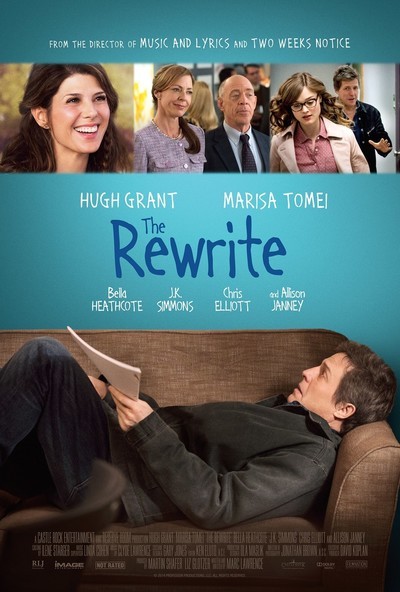