The Pursuit of Love

Fantasies and morality tales make uneasy bedfellows, as evidenced in the varyingly exultant and frustrating “The Pursuit of Love.” Adapted by Emily Mortimer from the famed same-named 1945 novel by Nancy Mitford, the three-episode miniseries is set in that sliver of time between World War I and World War II, and follows two cousins whose contrasting personalities and priorities complicate their love and affection for each other. With characters who are types more than people, “The Pursuit of Love” is at its best when it’s a prickly, satirical analysis of the flightiness and eccentricity of the wealthy, and when it feels like a gossipy, gauzy party brought to life from the pages of an F. Scott Fitzgerald novel. But when it attempts to make broader statements about women’s responsibilities and identities without the character work to back it up, the aesthetic joys of “The Pursuit of Love” threaten to collapse under that moralizing weight.

Beginning in 1941 before jumping back to 1927 and moving linearly forward, “The Pursuit of Love” follows cousins Fanny Logan (Emily Beecham) and Linda Radlett (Lily James). Fanny is the only daughter of the Bolter (Mortimer), a woman who left her to be raised by her Aunt Emily (Annabel Mullion) while the Bolter dove into a string of relationships. Deeply hurt by her mother’s abandonment, Fanny grows into a practical, logical young woman. Each Christmas, Fanny visits Linda at her family’s manor house Alconleigh in the English countryside. Alconleigh is ruled by Linda’s tyrannical father Matthew (Dominic West), whose hatred of foreigners and refusal to let his children—especially his daughters—be educated has inspired in Linda a passionately emotional nature, and a desperate desire to grow up and leave her family.

Each episode of “The Pursuit of Love” tracks the cousins as they attempt to navigate pending adulthood, and their routine becomes Linda falling for a man, deciding she’s in love, leaving Fanny to be with him, and then realizing that she hasn’t found happiness at all. “She was a wild and nervous creature, full of passion and longing,” Fanny (who serves as the series’ narrator) says of Linda, and Linda whole-heartedly throws herself into one relationship after another. Each man opens up a window into a different kind of world: Tony Kroesig (Freddie Fox), an Oxford student, banker’s son, and eventual member of the House of Lords; Christian Talbot (James Frecheville), an avowed Communist and ally to laborers, in particular those rising up during the Spanish Civil War; and Duke Fabrice de Sauveterre (Assaad Bouab), a wealthy Frenchman whose appreciation for fashion and art is balanced by his involvement in the French Resistance.

As Linda moves spontaneously through the world, Fanny stays put and worries; much of the tension of “The Pursuit of Love” comes from that imbalance. The arcs of supporting characters also rotate around Linda: the snarling Matthew, who West portrays with alternately hilarious absurdity (“Linda, you’re uneducated, thank God”) and unsettling rage; Fanny’s concerned uncle Davey (John Heffernan), whose wide grin belies his awareness of the social ruin Fanny faces if she gains a certain reputation; and the Radletts’ neighbor Lord Merlin (Andrew Scott), a “bright young thing” whose eccentric qualities (dying pigeons bright colors, letting a horse roam through his home) run parallel to his belief that society’s rules often subjugate women. Heffernan and Scott (this miniseries’ smoldering MVP) are particularly great together, and their characters offer two sides of the “moneyed gentleman” coin. A scene during which Davey and Merlin trade snide observations about how wealthy their peers are and dissolve into laughter over memories of gallivanting around Europe together is an absolute highlight, and an indicator of what “The Pursuit of Love” could have used more of: sardonic self-awareness to balance so much treacly sincerity.

Instead, “The Pursuit of Love” stays laser-focused on the differences between Linda’s and Fanny’s worldviews, and shame on me if I were to complain about any pop culture entity spending too much time on women’s lives. But what is lacking from “The Pursuit of Love” is a consistent interest in the women’s interiority past Linda’s love obsession and Fanny’s inability to understand it. Fanny is such a reactive character that she succeeds as an observational narrator, but when “The Pursuit of Love” attempts to use her as a foil for Linda, there just isn’t much there. The series’ third (and best) episode makes some headway into Fanny’s own personality, but then maddeningly turns down an overly familiar narrative road and leaves that subplot behind. Fanny and Linda feel slightly flattened all throughout the miniseries, as if Mortimer decided that the former being the bookish, quiet one and the latter being the vivacious, flirty one was enough personalization.

James is charming enough to overcome these limitations, though, especially when she slips into some of her “Mamma Mia! Here We Go Again” mannerisms: swooning, giggling, emoting. She and the more stalwart Beecham make a good match, and Mortimer emphasizes their complicated relationship with scenes that both celebrate their bond (hiding together in the Alconleigh linen closet) and critique their codependency (an agonizing farewell as Linda leaves by train for France). What is somewhat missing from all this, though, is what makes Linda so unique and so beloved when her actions are so often deeply selfish and hurtful to others; the series’ tone is all over the place. (A more precise satirical bent would have crystallized this: Do people just like Linda because she’s beautiful?) And the absence of that explanation also makes the ending of “The Pursuit of Love,” which stresses motherhood as a natural, sacrificial responsibility, fall somewhat flat in terms of its emotional impact.

“The Pursuit of Love” was filmed during the COVID-19 pandemic, and parts of the adaptation do feel constrained: a reliance on indoor locations, production design to make scenes seem as if they are set in France, and an onslaught of contemporaneous black-and-white photographs and archival news footage to communicate the years passing from the 1920s to the 1940s. Some visual details are a little too cutesy (looping cursive script onscreen informs viewers of character names and locations), and the miniseries has a curious relationship with inclusive casting (the good: a couple of male love interests are portrayed by actors of South Asian and North African descent; the bad: Black women and women of color are used as exotic dispensers of wisdom).

Those distractions and shortcomings aside, “The Pursuit of Love” is technically well-considered. Sinéad Kidao’s costumes capture the characters’ singularities, from Merlin’s dotted, open-chest silk pajamas to Linda’s glittering, art deco wedding dress to Fanny’s sensible tweed suits and the ostrich hat she yearns for, and then can’t stop fiddling with. (Who knew the vision of Andrew Scott standing in a field while wearing a pair of sunglasses and black rollneck sweater would be so life-changing?) Anachronistic soundtrack choices, like New Order’s “Ceremony” and Sleater-Kinney’s “Modern Girl,” add a touch of flair a la Sofia Coppola’s “Marie Antoinette.” Does “The Pursuit of Love” say anything particularly insightful about womanhood, or about middle-century femininity as domestic ennui, or about the relationship between the arts and self-fulfillment? It hints at these ideas without digging in thoroughly or meaningfully, and its ending is infuriatingly punishing. But the miniseries’ breezy pace, likable ensemble, and low-key twee style make “The Pursuit of Love” easy to fall into, even with the sense that its satire could have been spikier.

Whole series screened for review. “The Pursuit of Love” premieres on Amazon on July 30. 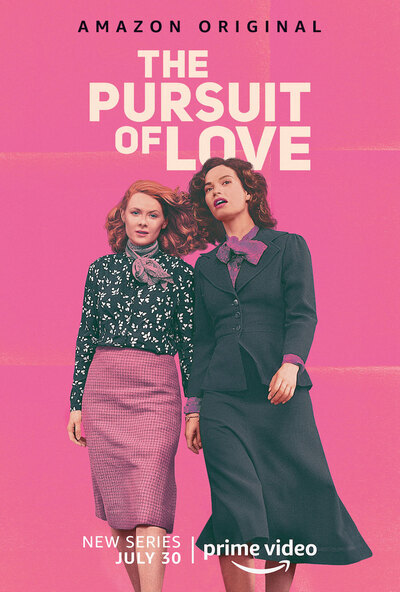 Emily Mortimer as The Bolter