If you loved the first “Mamma Mia!” movie back in 2008, well, “Mamma Mia! Here We Go Again” offers even more—and even less.

The sequel (which is also a prequel) features a bigger cast, a longer running time, extra subplots and additional romantic entanglements. But it’s emptier than its predecessor and has even lower stakes. It’s less entertaining, and for all its frantic energy, it manages to go absolutely nowhere.

Once again inspired by the music of ABBA and set on a picturesque Greek island, the second “Mamma Mia!” is the lightest piece of Swedish pastry with the sweetest chunk of baklava on the side. And while that may sound delicious, it’s likely to give you a toothache (as well as a headache).

At one point, during a particularly clunky musical number, I wrote in my notes: “I am so uncomfortable right now.” But while the goofy imperfection of this song-and-dance extravaganza is partially the point—and theoretically, a source of its charm—it also grows repetitive and wearying pretty quickly.

No single moment reaches the infectious joy of Meryl Streep writhing around in a barn in overalls performing the title song in the original film, or the emotional depth of her singing “The Winner Takes It All” to Pierce Brosnan. Along those lines, if you’re looking forward to seeing Streep show off her playful, musical side again, you’re going to be disappointed. Despite her prominent presence in the movie’s marketing materials, she’s barely in it.

That’s because Streep’s free-spirited Donna has died, we learn at the film’s start, but her presence is felt everywhere in weepy ways. Her daughter, Sophie (Amanda Seyfried), is re-opening the inn her mom ran—now christened the Hotel Bella Donna—on the same idyllic (and fictional) Greek island of Kalokairi where the first film took place. Writer-director Ol Parker (whose relevant experience includes writing those “Best Exotic Marigold Hotel” movies) jumps back and forth in time between Sophie nervously putting the finishing touches on the big party she’s planning and the story of how her mother originally ended up on this remote slab of land in the Aegean Sea—and became pregnant with Sophie in the late 1970s without being entirely sure of who the father was.

Lily James plays young Donna as a firecracker flower child—a friendly mess of wild, blonde curls and high, platform boots. (James’ sunny presence is one of the film’s consistent bright spots.) We meet the younger version of her best friends and jumpsuit-clad backup singers, Tanya (Jessica Keenan Wynn, doing a dead-on impression of Christine Baranski) and Rosie (Alexa Davies, standing in for Julie Walters). And we see her flirt and fall for the three guys she has giddy flings with the summer after college graduation.

First, there’s the skittish Harry (Hugh Skinner), who tries to charm her with his halting French in Paris. Next comes the sexy Swede Bill (Josh Dylan), who woos her on the boat that carries her out to the island. Finally, there’s aspiring architect Sam (Jeremy Irvine), who’s already vacationing on Kalokairi when she arrives. They will grow up to be Colin Firth, Stellan Skarsgard and Brosnan, respectively, and they will be forced into singing ABBA songs that clearly make them miserable.

Ah yes, the ABBA songs. They provided the confectionery connective tissue for the smash-hit stage musical and the original movie. This time, the ‘70s Swedish supergroup’s tunes that are the most rapturous are also replays from the first go-round: a flotilla of fishermen singing and prancing to “Dancing Queen,” or the splashy finale uniting the whole cast for “Super Trouper.” Much of the soundtrack consists of lesser-known songs, and the uninspired way those numbers are staged and choreographed rarely allows them to soar.

Once again, though, these actors are such pros that they can’t help but make the most of their meager material. Baranski and Walters in particular have crackling chemistry again. The brief moments in which the supremely overqualified Firth, Skarsgard and Brosnan pal around with each other as Sophie’s three dads made me long to see them together in something else. Anything else. A documentary in which they have lunch on the porch under sunny Greek skies, even.

And then Cher shows up. Now, it would seem impossible for this superstar goddess ever to be restrained. But as Sophie’s frequently absent grandmother, Cher seems weirdly reined in. Again, it’s the awkwardness of the choreography: She just sort of stands there, singing “Fernando,” before stiffly walking down a flight of stairs to greet the person to whom she’s singing. (As the hotel’s caretaker, Andy Garcia conveniently plays a character named Fernando, which is an amusing bit.)

But if you’re down for watching A-list stars belt out insanely catchy, 40-year-old pop tunes in a shimmering setting, and you’re willing to throw yourself headlong into the idea of love’s transformative power, and you just need a mindless summer escape of your own, you might just thoroughly enjoy watching “Mamma Mia! Here We Go Again.” Don’t think, and pass the ouzo. 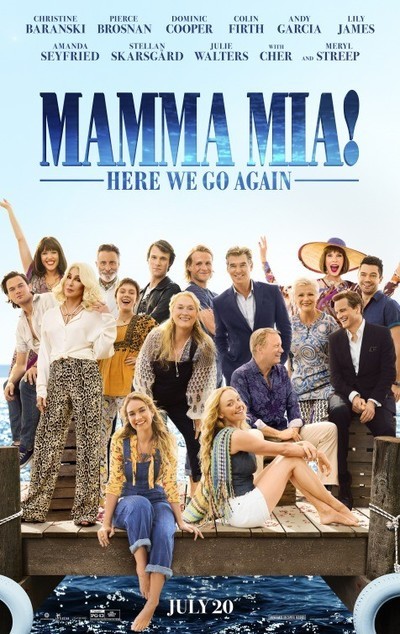 Rated PG-13 for some suggestive material.

Writer (based on the original musical by)