Ever wonder why we invest so much time and money cheering the highly repetitive exploits of comic-book superheroes these days? My guess is that all too often, real-life heroes can’t help but eventually disappoint. They are only human after all. And humans are deeply flawed, as likely to commit selfless acts of kindness as they are self-serving crimes of cruelty.

Nowhere is that truer than when it comes to our sports idols. All you need to do is to turn on FX’s deeply addictive series “The People vs. O.J. Simpson” to be reminded of that fact.

But the movies have always preferred the upbeat “you can do it!” exploits of underdog athletes. From the pigskin propaganda of 1940's “Knute Rockne, All American” to the recent portrait of Olympian ski jumper Eddie the Eagle, theater screens often double as inspirational posters that bolster the belief that anyone can achieve the impossible if you only believe in yourself.

Alpha dog tales? Not so common. That is why “The Program,” about the steroid-induced rise and public plummet of road-racing cyclist Lance Armstrong, at least attempts to stand out from the swarm of unlikely competitive triumphs caught on film.

British director Stephen Frears, who exhibited an acutely honed insight into the private lives of public figures with 2006’s “The Queen,” at least fully embraces the dark side that seems inevitable with a money-making enterprise built upon expectations of ever-escalating feats of physical endurance that break records, draw crowds and encourage corporate sponsors. But he also strips away the usual gears that propel these types of biopics and turns “The Program” into a doping horror story where Dr. Frankenstein and his monster are one and the same.

For a while, such a brash approach is refreshing as it eventually ends with Armstrong’s notorious confession to Oprah Winfrey in 2013. But the flashily photographed enterprise too often becomes a blur of sound bites and slick aesthetics akin to a Nike commercial. All the stylish montages of Lance’s open-faced lying can’t disguise “The Program’s” inherent weakness: Anyone who has kept tabs on the news in the past two decades is already aware of these supposed revelations about this seven-time winner of the Tour de France, from his professional triumphs to his personal failings.

The script by “Trainspotting’s" John Hodge, based on the book “Seven Deadly Sins: My Pursuit of Lance Armstrong" by Irish sportswriter David Walsh, uses the framework of a detective yarn with the reporter assuming the role of a sort of righteous Javert. Comic actor Chris O’Dowd brings his likable every-geezer sensibility to this intrepid seeker of the truth that no one who worships Armstrong, especially his fellow sports journos, wants to hear. But how many times do we have to watch him juggling dishes at family dinner time while taking an important phone call?

At least Ben Foster as Armstrong is the perfect clenched-jaw specimen, both outwardly and inwardly, to embody this megalomaniac win-a-holic. But there is not much nuance in his Lance, just naked ambition, an implacable belief in his powers of persuasion and the need to succeed at all costs by cheating the system.

Instead of opening with the Texas-born Armstrong dealing with his parent’s divorce or getting a Schwinn for his birthday, we are immediately plunged into the early ‘90s as the racer attempts his first European competitions. After falling behind, he quickly learns his foreign rivals are supersizing their performances with an assist from the so-called Italian pope of dope, doctor and coach Michele Ferrari (injected with a rather carefree, snake oil-salesman approach to breaking the rules by French actor Guillaume Canet).

Meanwhile, personal details are left by the side of the road. Armstrong meets his first wife and, boom, they are married and she is never seen again. At one point, three youngsters—presumably his children—join him on the victory stand. Celebrity friends of Lance ranging from George H. W. Bush and David Letterman to Robin Williams and one-time fiancée Sheryl Crow are briefly namechecked. And there is a meta moment when he and his teammates discuss who will star in the movie version of his life, with Matt Damon and Jake Gyllenhaal as possibilities.

The most dramatically compelling scenes arrive early when a 25-year-old Armstrong is diagnosed with testicular cancer just as his career is taking off. After bravely conquering the disease following grueling treatment, he dedicates himself to reaching out to other cancer patients and giving them hope through his Livestrong Foundation and its ubiquitous yellow wristbands. He pays visits to hospital wards, encountering one young boy so weakened by his illness he can only gaze and wanly smile upon the biking god.

But seconds later, the cyclist is seen doubling down on his resolve to win at any price, exploiting other riders on his team and forcing them to undergo the same dangerous drug regimen as he does. Meanwhile, it is observed that his status as a cancer crusader and philanthropic spokesman proves to be a mighty shield against any speculation or criticism. Hence, the birth of St. Lance.

It might have made a more interesting counterpoint to Armstrong’s maliciousness to better utilize an intriguing secondary character, the impressionable Mennonite-raised racing rookie Floyd Landis (Jesse Plemons, whose Bowery Boy mug also graced “Black Mass”). But he exists mainly to represent the many who kept quiet—although Landis eventually blew the whistle. Meanwhile, a dowdy Dustin Hoffman briefly materializes as a promotions mogul who had much to lose from Armstrong being caught.

“The Program" takes some commendable swerves away from the expected. But by speeding to the finish, it lags behind as an illuminating depiction of one of the more enigmatic sports figures of our time. 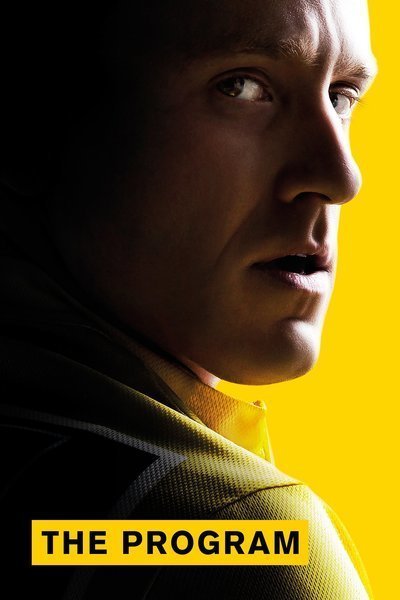