The Price of Everything

“There are three kinds of people in this world,” says Sotheby’s Fine Arts chair Amy Cappellazzo in Nathaniel Kahn’s “The Price of Everything,” a scrappy documentary on the increasingly currency-focused machinations of the art world. “Those who see, those who only see when they’re shown, and those who will never see.”

One of the several heavy-hitter interviewees of Kahn’s informally paced film, Cappellazzo pretty much nails the hammer on the head with her words. Her classification not only describes the inner workings of her field, but also any capitalistic structure where various stakeholders—from creators and decision-makers to taste-makers, buyers and beyond—collectively sculpt a value-driven outcome and/or determine the price tag of a piece of physical or intellectual property. Undoubtedly one of the well-informed and tasteful seers herself (as well as a powerful auctioneer that tells others what to see with authority), Cappellazzo, with her simple categorization, immediately crystallizes the manufactured dimension of the terrain in which she dwells; a world Kahn tries to glue together and make sense of to varying degrees of success.

Unlike Kahn’s acclaimed and much tidier 2003 documentary “My Architect,” “The Price of Everything” has a meandering nature and explores one too many avenues in building a thesis, while losing the viewer in the midst at times. Still, Kahn attempts to interconnect his ideas in an accessible fashion (palatable for the casual art appreciator) and charts a brief history of the money-driven motivations of artists and collectors. He dates the start of the irreversible, stock-market-like art boom back to 1973, when the infamous New York collector/taxi-cab heir Robert Scull auctioned off his priceless collection of abstract and pop art for a then-offensive (now, bargain) sum. Just like Steven Spielberg’s “Jaws” launching the big bucks summer blockbuster for the film industry, Scull’s auction paved the way to today’s headline-making art-sales craze, with jaw-dropping figures attached to golden toilets and inflatable ballerinas.

Though not everyone comes out of it with profits. Artist Robert Rauschenberg, whose works were a part of Scull’s 1973 sale (alongside names like Jasper Johns and Andy Warhol), for instance, hasn’t been in on the mountainous resale profits. Through first-hand interviews and amusing anecdotes, Kahn faces such financial hypocrisies head on, questioning whom the system favored (or continues to favor) vs. who repeatedly gets the short end of the stick in the unethical yet necessary relationship between art and money.

The most fascinating contrast in “The Price of Everything” occurs between the infinitely successful contemporary artist Jeff Koons—a frequent headliner who epitomizes the inescapable juncture of art and commerce—and the once-prominent Larry Poons, who created the celebrated Op-Art dot paintings. While the film doesn’t necessarily implicate Koons as a sell-out (you are free to draw your own conclusions), Poons’ oppositely principled stance in his modest upstate New York property becomes telling in comprehending the wide gap between fame and relative irrelevance. What role does perceived monetary value play in establishing the longevity of an artist, asks Kahn in more ways than one. Sure, money is evil and perhaps even the enemy of creativity. But is it a necessary evil to attach to timeless works of art (including the classics) in order to protect their importance throughout history?

There isn’t one correct answer; at least not within the scattered talking-heads and observational footage Kahn gathers together via impressively unprecedented access to some of the art scene’s hottest names—abstract and photorealist artist Gerhard Richter, critic Jerry Saltz, historian Barbara Rose and Nigerian-born artist Njideka Akunyili Crosby, among them. Each of these unassailable experts, including the ever-influential collector Stefan Edlis (who expressly prioritizes beauty and taste over monetary value) brings a different perspective to the overcrowded table of players. “The Price of Everything” doesn’t quite offer a fresh take on the massive topic it tackles that has effectively been studied in non-fiction efforts like “Art Bastard” and “My Kid Could Paint That.” But Kahn’s of-interest deep dive into this colorful madness still manages to leave a genuinely entertaining mark. 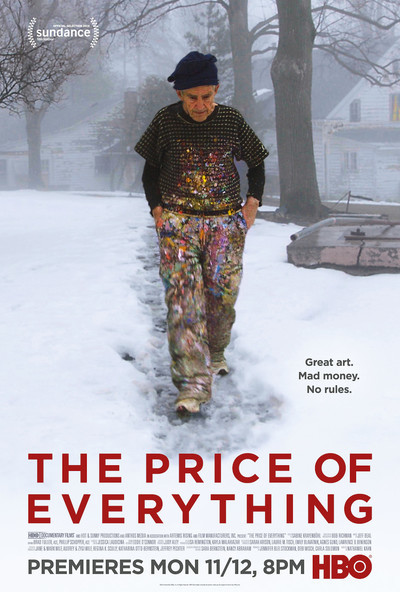