Shane Black’s “The Predator” is a fun, brutal, fighting machine that wastes no time getting down to business—not unlike its title character. It’s not big on wasted dialogue or too many attempts at meta humor, playing both like an homage/throwback film to the action of the ‘80s and something that feels new and fresh. There’s nothing pretentious or whimsical here as we so often see in films that almost parody ‘80s action instead of trying to figure out why these movies have endured in the first place. It’s easy to mimic or mock something. It’s much harder to ask why the first “Predator” captured lightning in a bottle and then try to catch it again. With a fantastic cast and razor-sharp pacing, the fact is that this is what you want from a movie called “The Predator.”

Black wastes no time, opening the film on a predator ship hurtling towards Earth. A sniper named Quinn McKenna (Boyd Holbrook) is on a job when he’s practically hit by an escape pod containing one of the legendary creatures. McKenna gets his hands on some of the alien’s gear, sending some of it home and hiding one particularly bad-ass piece, well, somewhere no one will find it. Instead of going to his P.O. box, the mail ends up on his doorstep, where his son Rory (Jacob Tremblay) opens the package, finding a predator weapon and mask.

Meanwhile, a science teacher named Casey Bracket (Olivia Munn) is brought in to examine the predator that McKenna incapacitated, pushed around by a smug asshole named Traeger (a fantastic Sterling K. Brown, proving he should play villains more often). While that’s about to go predictably haywire, McKenna is put on a bus of fellow military prisoners, including Nebraska (Trevante Rhodes, who should be an action star if there’s any justice), Coyle (Keegan-Michael Key), Baxley (Thomas Jane), Lynch (Alfie Allen), and Nettles (Augusto Aguilera). Nicknamed “The Loonies,” the gang eventually connects with Casey, and they all try to catch up with the predator before he gets to Rory to retrieve his stuff.

Co-written by another ‘80s icon in Fred Dekker, this is a movie that keenly understands and pursues what its audience wants, which is something more action filmmakers could learn from Black. There’s a rhythm and a structure to “The Predator” that’s easy to take for granted but much harder to pull off than people will probably give this film credit for. It’s in the way Black jumps from beat to beat, giving each character just enough dialogue and development for them to register as more than bodies for the predator to hunt but not lingering long enough for viewers to get impatient. Black is assisted greatly by an incredibly charismatic cast, and he knows how to amplify their strengths. Holbrook and Rhodes are the buddy action movie duo you never knew you wanted, Munn holds her own (although her character kind of takes a back seat in the second half), and Jane and Key are fun comic relief.

Casting aside, what really elevates “The Predator” above the disaster that it easily could have been is the way Black and Dekker manage tone. They lean into the old-fashioned aspect of “The Predator” in that they’re clearly trying to recreate the ragtag crew from the first movie to a certain extent, but they also play with a few other staples of ’80s action movies like “the kid who knows more than the adults about aliens” and “the initially-difficult government guys who will eventually need our hero’s help to survive.” And yet “The Predator” never plays like a pure parody. You get the sense that Black genuinely loves these tropes.

But "The Predator" loses steam by the time it gets to its climax. Some of the final scenes are messy in terms of editing, especially when compared to what came before. I liked some of the earlier set pieces more, as we are getting to know the characters, especially the initial predator breakout and a great scene with … wait for it … predator dogs. Yes, this movie has predator dogs. Dear reader, you probably know if you want to see a movie with predator dogs or not. If you do, I can’t imagine you won’t be happy with this one.

This review was originally filed from the Toronto International Film Festival on September 7th, 2018. 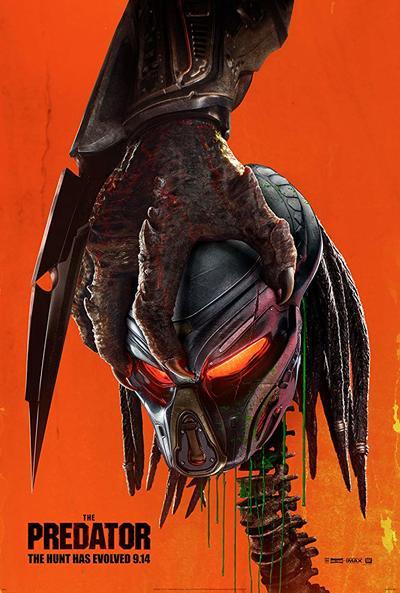