Like “The Wolf of Wall Street” of polka music, Maya Forbes' “The Polka King” tells the true story of a man in the 1990s who actualized an all-American hunger for success through consciously illegal ways. But from the very beginning, Jack Black’s first-generation Polish immigrant Jan Lewan is presented as a well-meaning, ambitious father and husband, working minimum wage jobs while owning a Pennsylvania strip mall trinket shop and leading his namesake polka band (featuring a sandpaper-dry Jason Schwartzman on clarinet), always with a huge smile on his face. With the support of his wife Marla (Jenny Slate), he wants to build an empire, believing in America’s opportunity. But he needs money, a lot of it. Soon enough, he elects to taking investments from various fans in his community, offering them 12% interest and believing with all of his big heart that he will pay them back.

The “system” gets in the way of Jan’s sincere delusions of grandeur when he receives a visit from a federal agent (J.B. Smoove). Since Jan didn’t file a business prospectus before taking the investments, he has to give the money back in three days. While it’s believable that Jan wouldn’t know about this type of paperwork, it’s believable by the logic of greed what he does as soon as he lies to the government and they forget about him: he takes in more and larger investments, in order to pay people back he says, but also expands his ventures. As the timeline of this film reveals, the amateur criminal gets away with this for about five years, without his irritated mother-in-law (a high-voltage and very funny Jacki Weaver) or the government finding out.

While the first two acts have the energetic and light nature of polka music, the movie has a tempo problem, dragging in various points when opting to be merely quirky instead of punchy. As it recounts Jan’s wild business ideas, such as when Jan and his clarinetist bribe someone at the Vatican so that Jan’s European tour group can met the pope, the broad comedy becomes a weaker substitute for the more lively curiosities behind this bizarre story. With Forbes unable to create a fuller idea of what his investments are going towards or provide commentary on how the government let this happen, her script (co-written with Wally Wolodarsky, of various legendary “Simpsons” episode credits) only moves by anticipation that some type of justice shoe will eventually drop.

The sporadic magic of “The Polka King” largely comes from its casting, and the hammy performances that follow. Slate is given what seems like an extended passage about her character entering a Ms. Pennsylvania contest so that the actress can show off her wackiest side, which she does valiantly. The same goes for another overlong passage in which Schwartzman, in a tone most often heard in his Wes Anderson collaborations, talks about his dreams of changing his name to “Mickey Pizazz.” There’s also Vanessa Bayer dancing in a bear costume, and Jacki Weaver acting like she’s a live-action character from "The Simpsons," among other slap-happy joys. But the film's glimmers of brilliance dissipate once it goes back to a narrative that by the third act is half-baked.

Jack Black proves again to be a consistent force of comedy and drama. He helps articulate the fascinating aspects of Lewan’s story: the rock star presence he has in the Pennsylvania polka scene, the determination he has to be successful and take care of people like his friends or family, the way that a good man would succumb to constantly lying, blinded by whatever his good intents are. As he did with Bernie Tiede in Richard Linklater’s “Bernie,” Black creates an extraordinary image of a corrupt American who becomes larger than headlines as their life spins out of control, and does so with a great amount of compassion. Watching Black is a calculated volley of sadness and humor, but the joke is never on Jan. When he sings about being proud to be an American in a show-stopping moment (the good kind, in this case), we feel his elation; when he cries after everything falls apart, we recognize his clumsy tragedy.

Numerous recent films share the storytelling values of “The Polka King”; offbeat, dark comedies that raise questions about outsiders finding their way into images of American success (just look at “The Disaster Artist,” or “I, Tonya”). “The Polka King” adds to this mix one of the most complicated characters when it comes to sympathy and what determines a good or bad person. Even then, Jan is a fascinating question mark. It’s a letdown, then, that the story’s boldest stance about this saga is that it’s a very goofy true story and ripe for a cartoonish take. While numerous laughs, goofy montages and bonafide polka performances follow, the immaculate kitsch of “The Polka King” only gets it so far. 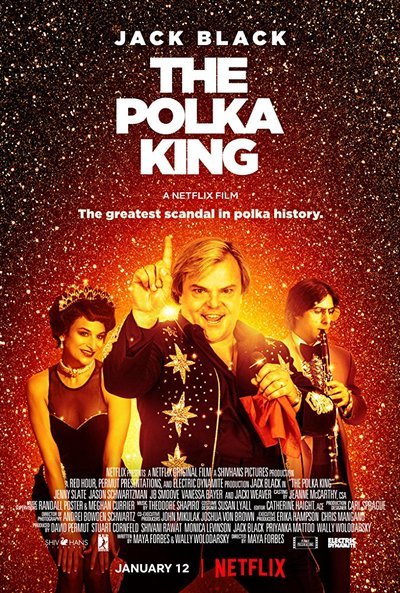