In "The Peanut Butter Falcon," co-written and co-directed by Tyler Nilson and Michael Schwartz, Zac (Zack Gottsagen) is a man with Down Syndrome who has been placed in a nursing home by the state since he has no family and no resources. He has befriended every elderly resident, as well as Eleanor (Dakota Johnson), a kindly young woman who works at the facility. Zac is a huge wrestling fan and all day, every day he watches an ancient video tape put out by a wrestler named Salt Water Redneck (Thomas Haden Church), whom Zac idolizes. Zac's goal is to get to Salt Water Redneck's wrestling school, the one advertised in the video. And so Zac tries to escape. Repeatedly. Eleanor is forced to label Zac a "flight risk." Zac rooms with Carl (Bruce Dern), who complains about having to watch the same wrestling video all day but sympathizes with Zac's desire to bust loose. One night, Carl helps Zac bend back the iron bars on the window, suggests Zac grease himself up with hand soap, and watches his roommate flee into the night, barefoot and wearing just his underwear.

Zac takes shelter under a tarp on a rusty boat. This boat belongs to Tyler (Shia LaBeouf), a crab fisherman embroiled in a quickly escalating war with a rival named Duncan (John Hawkes). Tyler discovers his "stowaway" while being chased by Duncan through the complicated tributaries of North Carolina's Outer Banks. At the same time, Eleanor searches for Zac before her supervisor orders him to be put into a state hospital with a terrible reputation.

After a bumpy beginning, Tyler and Zac bond. Zac tells Tyler his mission is to get to Salt Water Redneck's wrestling school, and Tyler, on his way to Florida, decides to help. They set off on foot through a swampy landscape. By the time Eleanor catches up with them, they have built a raft with lumber given to them by a blind backwoods preacher. After some arguments, she is convinced—by a smitten Tyler—to join them on their outlaw journey. The trio float down the coastline, unmoored from the trials and stresses of their respective worlds, like Huck and Jim floating down the Mississippi River.

If all of this sounds too sentimental to be believed, it isn't. "Peanut Butter Falcon" is a buddy movie, but it has the quality of a fable, even down to how it's shot by cinematographer Nigel Bluck. The film takes place in a very specific locale. You can smell the salt and pollen and mold in the air. The waves, cornfields, marshes, crab pots ... even the condition of Tyler's boat—comes from reality, not someone's idea of reality. Bluegrass, country songs, gospel hymns punctuate the narrative. It's a fable, but a fable grounded in details, the here-and-now. Except for the "names," the film seems to be populated by many non-professional actors, or at least people who actually live in the area. This makes a huge difference. Zac lives in the real world. Unlike so many disabled characters in film, Zac is not utilized as a symbol, a metaphor, or created to be "inspirational." He's the central figure, he's outspoken and strong, funny and vulnerable. He's never had a friend before. He's always wanted to be "bro dawgs" with someone. Watching the relationship develop with Tyler is one of the film's many pleasures.

Some of the adventures work better than others. Some of it feels contrived. But these are nitpicks in the face of what "The Peanut Butter Falcon" accomplishes. Both LaBeouf and Johnson (and later, Church) approach their roles with ease and simplicity, highlighting Gottsagen (who has studied acting since he was a child) beautifully. Johnson's irrepressible sense of humor serves her well as an actress (even in the "Fifty Shades of Grey" franchise), and watching her react to LaBeouf's initial flirtation—trying to maintain her boundaries all while she is drawn into his humorous rat-a-tat—is just a small example of what this film—and its cast—does really well. Church's eventual appearance as The Salt Water Redneck does not occur as planned. Nothing really does.

Cliches aside, there's something at work in "The Peanut Butter Falcon," something eccentric and exuberant. Nilson and Schwartz's devotion to the details of Zac's world highlights Gottsagen's funny and intelligent performance, giving the film an authenticity it wouldn't otherwise have. The conversation about "representation" in cinema often excludes the disabled. Able-bodied actors play disabled characters all the time, and sometimes win Oscars for it. This is not to say that these aren't good or empathetic performances, but all you have to do is watch Gottsagen's performance to see what we are missing when we discount the complaints of the disabled community in re: representation. It is inconceivable to imagine an able-bodied "name" playing this role and bringing to it even half of what Gottsagen does naturally. 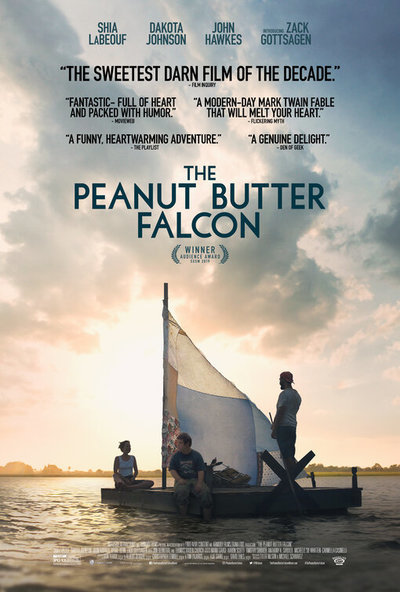