The One and Only Ivan

Like a novice juggler struggling to master some complicated tricks, “The One and Only Ivan” tries to encompass several different stories, themes, and ideas while appealing to adults and very young kids at the same time. It’s a tough feat to pull off—an uneasy mix of lofty notions about freedom and dog fart jokes—which the film only sporadically succeeds in achieving.

Some impressive visual effects and a strong voice cast can’t do much to enliven or unify the movie from director Thea Sharrock (“Me Before You”) and veteran writer Mike White (“School of Rock,” “Chuck & Buck”). And what’s frustrating is that “The One and Only Ivan” is based on a Newbery Medal-winning children book by Katherine Applegate that’s itself inspired by true events. There really was a gorilla who expressed himself through art; after years in captivity as part of a mall circus, he spent his final days in the sunshine at Zoo Atlanta. The meat of the story is compelling, but the actual telling of it is rushed and jumbled.

Sam Rockwell finds some unexpected avenues into his role as he always does in providing the voice of Ivan, a hulking creature with a heart of gold. Ivan has been the headliner for years at a sad, little circus in a dying shopping mall off the highway. He comes storming out at the end of the show, stomping and roaring and beating his fearsome breast, but he’s actually a pretty laid-back sort within his concrete confines. His best pal is a scruffy, stray terrier named Bob (Danny DeVito), and the easy banter between the two is among the film’s few highlights. Angelina Jolie provides the voice of the clan’s matriarch, a quiet and wise elephant named Stella. (Jolie is also one of the film’s producers.) Helen Mirren voices a fluffy poodle, Chaka Khan is a wisecracking chicken, and the great “Hamilton” star Phillipa Soo is completely wasted as a repetitive parrot named Thelma. It truly is a crime.

Overseeing this menagerie is Bryan Cranston as the circus’ founder and ringleader, Mack, who does his best to draw in dwindling crowds with his hammy, flashy routine. “The One and Only Ivan” seems ambivalent about this character who dictates so much of the film’s action. He’s not a bad guy, per se. He’s amiable enough, and he’s cared for Ivan like a son since the gorilla was a baby. He’s no Joe Exotic, but he is holding these animals captive for profit, something they eventually realize they no longer want. Cranston is charismatic as always, but he can only do so much with a character so lacking in complexity.

Mack’s big move to appeal to a wider audience is to introduce an adorable baby elephant named Ruby (“The Florida Project” star Brooklynn Prince), who sweetly wears down Ivan with her incessant inquisitiveness. (This is stuff for the smallest viewers.) But another young lady, Julia (a lovely Ariana Greenblatt), the sensitive daughter of one of the show’s stagehands, shakes things up even further when she shares some of her crayons and paints with Ivan. Soon, he’s creating striking abstract works, which evolve into elaborate landscapes that reflect his inner yearnings. As poignant as this suggestion may seem, it gets smothered in wackiness when all the animals plot a late-night breakout.

So if you’re keeping track, “The One and Only Ivan” is about corny characters goofing around with each other, the challenges of keeping a business afloat within a volatile economy and the importance of animals roaming free in the wilderness. Sharrock shifts gears between all of these elements quickly and awkwardly, so very little actually resonates. And the thing that made Ivan such a fascinating creature in real life—his unusual artistic ability—feels like an afterthought, just one of many subplots. It’s certainly harmless enough if you already have a Disney+ subscription, but it’s far from the greatest show on Earth. 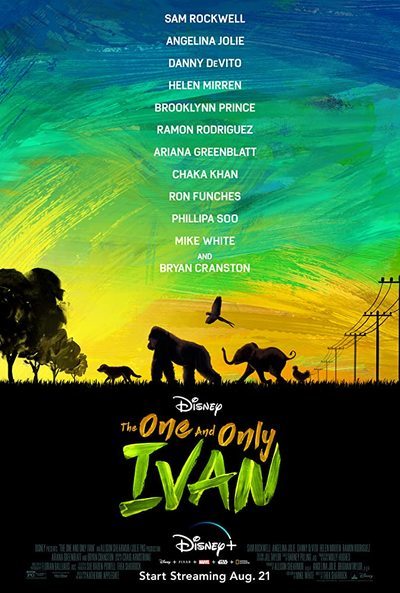