With its combination of potentially volatile story elements—including offbeat comedy, melodrama, undertones of suspense and an extremely fluid contemplation of contemporary sexual mores—“The New Girlfriend" is a sort of cinematic high-wire act in which even the slightest misstep could send the entire thing crashing to the ground in a mess of smutty farce and mawkish soap operatics. Not only does the film keep itself aloft for the duration, one of its greatest pleasures is seeing how filmmaker Francois Ozon manages to find just the right note for such challenging material. He transforms what might have been a tonal nightmare in other hands into a wildly entertaining work, one that manages to be simultaneously funny, touching, slightly unnerving and undeniably sexy to behold, regardless of where your predilections may lie.

The film opens with a funeral, then charts the lifelong friendship between Claire (Anais Demoustier) and Laura (Isild Le Besco) from the moment that they first meet at the age of seven, and become instant BFFs through first loves and first heartbreaks to their marriages—Laura to the dashing David (Romain Duris) and Claire to Gilles (Raphael Personnaz). It seems so perfect that one awaits the other shoe to drop, and it soon does when Laura unexpectedly takes ill and soon dies, leaving a devastated David to raise their infant daughter, Lucie, alone and an equally bereft Claire to cope with her equally profound sense of loss. Since she is Lucie's godmother, Claire decides that the best way to deal with the tragedy is to do all that she can to help David care for the girl whenever she can. One day, she goes over to their house unannounced and when she goes in, she sees a strange woman holding the baby that turns out to be David in a wig, makeup and one of Laura's dresses.

Needless to say, Claire is more than a bit taken aback by this sight, and David is forced to explain things. For as long as he can remember, he's had a thing about wearing women's clothing, though he stresses that this desire has nothing to do with sexuality and that he is still straight. When he met and married Laura, this compulsion receded; now that she has gone, the desire has returned full-force. As an added side benefit, Lucie, who is too young to remember Laura in anything but the most general of details, seems to be responding well to this ersatz version of her. Once she comes down from the initial shock, Claire is willing to embrace this new side to David and even helps him to further develop this new side to him by dubbing this alter ego "Virginia," showing her how to act more feminine and even taking him out into the real world to interact with others as a woman.

With a set-up like this, "The New Girlfriend" could go in any number of narrative directions, ranging from dark suspense (as was apparently the case with Ruth Rendell short story's from which, according to the credits, it was "loosely adapted") to the kind of semi-transgressive, self-aware melodrama that Pedro Almodovar built his career upon. Without going into too much detail so as not to spoil anything, the film goes off in a number of directions that nevertheless manage to flow together with surprising grace. There is a lot of humor to be had in the story, and for the most part, it manages to eschew the usual broad hijinks that occur when a man turns up dressed as a woman; at one point, David is forced to make a quick change when his former mother-in-law arrives unexpectedly but forgets to remove his lipstick.

At the same time, there is a serious side to the story as Claire finds herself keeping the existence of Virginia a secret from the more straight-laced Gilles and David dealing with his own identity issues. Meanwhile, conventional notions of gender and sexuality are constantly being reexamined and revised throughout—beyond the obvious involving David/Virginia, Claire also goes through a change as well as she assumes a more masculine presence, both when she and Virginia are out in public together, and in bed with Gilles.

Ozon's screenplay is clever and intriguing throughout, while still maintaining a clear through line for viewers to follow even when things start getting really complicated. The performances are strong across the board—Duris finds the humor and pathos in his character without ever becoming a cartoon, Demoustier (who in many ways has the trickier role when you think about it) is wonderful in the way that she helps to navigate viewers through the increasingly tricky emotional and sexual waters and, as the more conservative-leaning husband, Personnaz brings life and personality to a character that could have easily become a caricature. All the technical aspects are top-notch as well, and the film even manages to pull off the difficult trick of putting a man in a dress and not making it look like an old Milton Berle routine—Duris may not be 100% convincing as a woman but he certainly comes closer to that mark than most on-screen cross-dressing attempts manage to achieve.

Although his name may not be that well-known outside of auteurist circles, Francois Ozon is one of the most audacious filmmakers on the world cinema scene today, especially when it comes to sexually charged material. Among his efforts are the international hit "Swimming Pool", "In the House" and the teen call girl drama "Young and Innocent." Even when he isn't dealing with overtly erotic material, he is always out there trying to provide audiences with something new and unexpected—his wild "8 Women" brought together eight of France's top actresses (including veterans Catherine Deneuve, Isabelle Huppert, Emmanuelle Beart, Fanny Ardant and Danielle Darrieux and relative newcomers Virginie Ledoyen and Ludivine Sagnier) for a musical murder mystery—and even when he stumbles, as was the case with 2009's "Ricky", a baffling fable about a baby born with a pair of wings that allow him to fly, he still goes down swinging for the fences. "The New Girlfriend" is a film that finds him at the top of his game, and the results will intrigue and arouse audiences in equal measure. 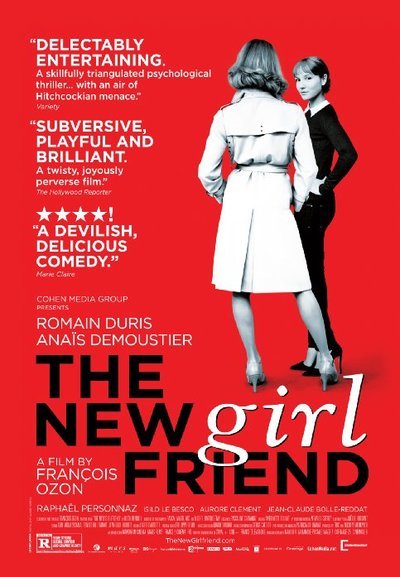