Those monks really knew how to sin

"The Monk" is an eccentric period melodrama with horror-flick overtones. Occasionally incoherent but never dull, the movie brims with weird imagery: figures in peaked hoods scurrying across windswept plains, nuns in opaque white veils, a bouquet rapidly wilting and then bursting into blue flames, a baby being pecked by crows. At one point, a group of men march past the camera. They are wearing crowns of candles on their heads; drips of hardened wax cover their shoulders.

Directed and co-written by Dominik Moll, a German-born French filmmaker best known for his clever thrillers ("With A Friend Like Harry," "Lemming"), "The Monk" stars Vincent Cassel as Ambrosio, a Capuchin friar with an ominous hand-shaped birthmark on his shoulder.

Abandoned as a newborn on the steps of a monastery, Ambrosio was raised to be a model monk: pious, perceptive, sensible. A skilled confessor and orator, he is widely admired by his Capuchin brothers and by the townspeople who come to hear his sermons. Cassel gives the character a credible holier-than-thou confidence. He wears a beard that effectively covers half of his face, drawing attention away from his mouth and on to his pensive eyes.

The story of "The Monk" — adapted from Matthew Lewis' influential-though-hardly-classic 1796 novel — is the story of Ambrosio's descent into sin and madness. It's lurid, silly, strange stuff — murder, incest, pacts with the devil — so it should come as no surprise that Lewis' novel was a Surrealist favorite. Luis Bunuel even tried to make it into a movie. Though Bunuel never managed to get his version financed, the Surrealist critic and filmmaker Ado Kyrou eventually made an interesting film — starring spaghetti Western icon Franco Nero, of all people — based on Bunuel's script.

Moll's version flirts with Surrealism without ever quite giving the impression that it's a work of art; his take on "The Monk" is, first and foremost, a classy B-movie, keen to offer Gothic atmosphere, nudity, and mild shocks. In some ways, it resembles a Hammer horror flick (think "Curse of Frankenstein" or the Christopher Lee "Dracula") — except that the Hammer movies were visually opulent and "The Monk" is often austere and grayish. Interiors are dim and shadowy, which fits the 16th century setting. The costuming isn't gaudy or over-stylized. During its first 15 or so minutes, it would be easy to mistake "The Monk" for a restrained religious drama.

At around the 15-minute mark, however, Ambrosio recounts a dream — a vision of a woman in red who doesn't show her face — to a fellow monk, and the movie effectively enters a dream state which it never leaves. Every subsequent scene inches the dream further and further into nightmare. The visuals become more adventurous; Moll plays around with superimposed images, diffuse light, silent-movie-style iris shots, and even throws in a few theatrical lighting tricks — a spotlight pointing out a character in a crowd, for instance.

Oddly, as "The Monk" becomes more imaginative, its plot — a lot of twisty intrigue involving a masked leper who lives at the monastery and a young aristocrat's courtship of a woman who admires Ambrosio — becomes less engaging. By the end, it's hard to care for Ambrosio or his fall from grace; he has been marginalized by the imagery. 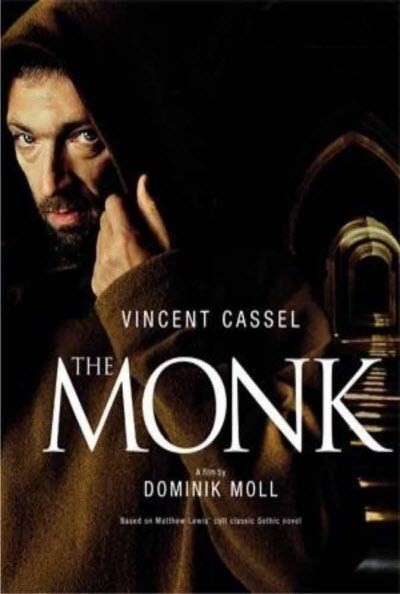 Geraldine Chaplin as The Abbess