The Man Who Killed Hitler and Then the Bigfoot

Back in 2009, I was willing—no, I admit it, I was eager—to cut Quentin Tarantino some slack on his admittedly ridiculous (spoiler alert!) Hitler assassination climax in “Inglourious Basterds” for several reasons. One was that Tarantino’s movie hardly purported to be anything like an accurate historical film; it was always meant to be approached as a grindhouse fantasia on World War II themes. Second, the whole concept was executed with such brazen brio that it really could sweep a viewer up.

Just because I sat still for it then doesn’t mean I’ll lie down for just anything else similar in the revisionist department, Which brings us to, yes, “The Man Who Killed Hitler And Then The Bigfoot.” The feature debut of Robert D. Krzykowski, who achieved some renown as a cartoonist with the web strip “Elsie Hooper,” the movie is indeed about just that guy, but as an already oft-quoted line of dialogue from the film avers, “It’s nothing like the comic book you want it to be.”

The Man is Calvin Barr, played with maximum Sam Elliott-ness by none other than Sam Elliott. He lives in Smalltown U.S.A. where he chats with his barber brother (Larry Miller) and is hassled by muggers whom he impressively dispatches. There’s little reality to this setting; that it’s both homey and dangerous tips one off that it’s only a construct to underscore Barr’s stoic brand of heroism. For he takes no pride in the fact the he killed the Fuhrer, an act depicted in multiple flashbacks. According to Calvin, “His ideas continued to do their damage without him.” The movie, clearly wanting to stay SOME kind of comic book, refuses to get too specific here. The Holocaust side-stepping left one of several bad tastes in my mouth.

In any event, as far as Calvin is concerned, all he did was kill a man, and in the process indirectly lost a love. But now Uncle Sam wants him again. Not only has “the” Bigfoot manifested himself, he carries a dread virus that Calvin is the only living warrior to be immune to (don’t ask) and so duty calls “I don’t want to kill again, either beast or man.” Is he going to get talked into it? Yeah, he’s going to get talked into it.

Backed by a first-class production team (John Sayles! Douglas Trumbull!) and an impressive cast, Krzykowski wants to make “Hitler/Bigfoot” transcend its schlocky premise even as it honors it. To this end he uses a sharp visual sense that’s clearly taking big cues from movie brat cinema of the ‘70s, and he hired Joe Kraemer to contribute a very John-Williams-redolent score. I suppose there are some who will get off on this movie’s competence and uber-sincerity, but I found the premise one or two bridges too far. Sam Elliott junkies, too, are sure to be delighted. 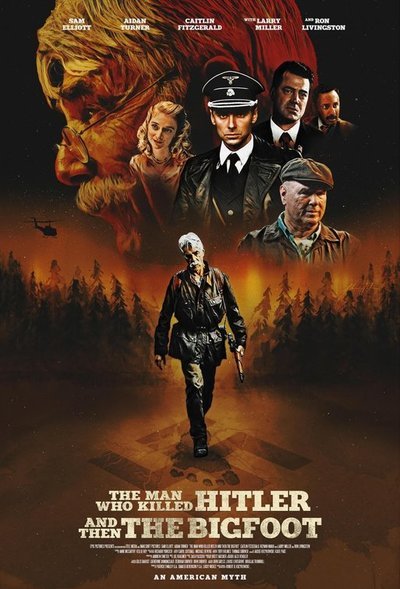 The Man Who Killed Hitler and Then the Bigfoot (2019)