The Lords of Salem

A maddeningly vague sense of dread presides over "The Lords of Salem," heavy metal rocker-turned-filmmaker Rob Zombie's latest movie. It's the first film Zombie has made with total creative control, a tantalizing prospect after the Weinstein brothers drastically re-edited both of his ambitious entries in the "Halloween" slasher franchise against Zombie's wishes. But instead of retreating into his manic, hyper-allusive style of psychedelic, grindhouse-friendly pastiche, Zombie tested his considerable skills and made something different.

When I interviewed him last fall, Zombie said that he wanted his viewers to feel the way he felt while watching a Stanley Kubrick film: as if they were going through the same experiences as the characters, instead of just passively watching their lives unfold. Zombie succeeds in that regard, and his film's disturbing violence and slow pacing leaves viewers feeling as helpless and brain-addled as his protagonists. It's hard to cozy up to "The Lords of Salem," but it is nothing if not ruthlessly effective.

"The Lords of Salem" is about an unfinished cycle of violence. The film's story begins during the Salem witch trials, where bare-breasted older women are tortured and burned at the stake while character actors like Sid Haig solemnly administer last rites. Amped-up howls of pain and extreme close-ups of humiliated matrons make you hope that their pain ends sooner rather than later. But at one point, screams become laughter, and victims are revealed to be monsters.

Flash-forward to present day Salem: Heidi (Sheri Moon Zombie, Rob's wife), a shock-jock DJ and former drug addict, falls under a mysterious spell after she plays an LP delivered to her by an unknown group called The Lords. The Lords' music doesn't affect either of Heidi's male colleagues, but it does have an impact on female listeners.

Curious and not a little frightened, Heidi seeks the help of local occult historian Francis Matthias (Bruce Davison), whose own obsession with the Lords develops as Heidi's condition deteriorates. With each new visitation from demon fetuses and sex-obsessed incubus priests, Heidi behaves more erratically, inevitably threatening to start using again. This leaves Francis, apparently the only enlightened and truly concerned male in Salem, to help Heidi before Salem's Satan-worshipping witches destroy her.

Like Heidi, viewers have to struggle to get their bearings throughout "The Lords of Salem." The Lords' motives are never fully explained, making their obscene actions that much more unsettling. Zombie doesn't glamorize misogyny, but he does make it the ugly thematic foundation of his film's excruciating cruelties. Still, he's such a talented filmmaker that the specific source of his villains' evil doesn't ultimately matter.

Because of the film's incremental pacing and penchant for unnervingly slow tracking shots, Heidi's seduction seems to take forever, though it lasts only one hellish week -- broken up by Kubrickian intertitles that bombastically announce each new day with a "Law & Order"-style "whoom-whoom" sound effect. And when Heidi does dream of devils and witches, those fiends don't torment her from a distance for long. First we get an agonizing long take of an open doorway that radiates a satanic red light, then a repulsive scene of, um, non-consensual oral sex, and then some priests with sackcloths where their faces should be do some pretty impolite things with a bunch of red dildos. As you watch "The Lords of Salem," you eventually anticipate each successive "whoom-whoom" that will bring the film that much closer to its grisly ending.

"The Lords of Salem" is a genuinely nasty and disturbing piece of work, but its cumulative nerve-shredding effect is not just the product of effective direction. Sheri Moon Zombie delivers her best serious dramatic performance yet. Character actors Davison, Ken Foree, and Jeff Daniel Phillips also make it easy for viewers to hope for the best while praying for the worst to happen to their impotent, inconsiderate characters.

This is partly because Zombie identifies with everyone in "The Lords of Salem," even the film's demonic antagonists. He told me that everyone in his films are an extension of himself. Zombie believes in Freudian dream theory and the Jungian unconscious, and has said as much in his last couple of movies (he pointedly quotes Jung in "Halloween II"). "The Lords of Salem" is accordingly a very personal film, and thanks to its creators' Herculean id-plumbing, it's that much more winningly gross for it. 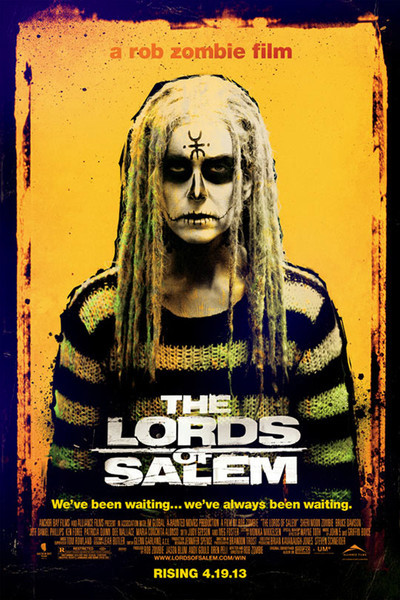