The Look of Silence

Director Joshua Oppenheimer’s “The Act of Killing,” a most unusual treatment of mass murder and the people who commit it, galvanized both documentary audiences and filmmakers in 2013. Oppenheimer, a writer, activist, and conceptual artist, invited the perpetrators of ostensibly-anti-Communist, state-sponsored killings in 1960s Indonesia to reenact their deeds as heroic movie scenes. The results, I myself noted at the time, were “bracingly ghastly,” and also disturbing in their deeper revelations.

Oppenheimer’s new film, “The Look of Silence,” is a deliberate companion piece to “Killing,” and it too is strong and upsetting. Its conceptual framework isn’t nearly as idiosyncratic as the previous film’s, and that could be to its advantage. Instead of working with multiple criminal subjects, Oppenheimer settles in with the family of one victim. “Silence” tells the story of this man’s death—which, because of its circumstances, gained a certain symbolic weight with certain Indonesians over time—through the eyes of his younger brother, Adi, an optometrist in his early 40s who was born after the killings and was seen by his now very-aged parents as, if not a replacement for their older child, a kind of proxy for him.

The movie opens with Adi watching a television monitor, looking at footage in which an older man gleefully recounts a killing. “I ripped him open; his intestines spilled out.” A series of titles tells the viewer that over one million supposed “Communists” were murdered during the period of Indonesian turmoil, and that the “perpetrators still hold power throughout the country.” Oppenheimer and his cameras follow Adi as he travels around rural areas of his country, giving eye exams and prescribing glasses for several of his interview subjects, who confess their doings with often shocking nonchalance. Adi, who explains early on that “When I meet older people, I like to hear about the past,” is an often cheerful, pragmatic fellow who enjoys a light-hearted relationship with his own daughter; when he watches the footage of confessed killers or listens in person to one-time thugs, his face takes on a cast of intense scrutiny, the look of silence to which the film’s title refers. In a sense, he teaches the viewer on the other side of the screen how to process these stories.

And what appalling stories they are. “Drinking your victim’s blood is important, otherwise you’ll go crazy,” one old man tells Adi. A one-time military man brags about trying to solicit a cruise to the U.S.A. after completing his killing labors; he’s earned such a thing, he says, because “We did this because America taught us to hate Communists.” In the school room where one of Adi’s children is taught, a teacher explains to his charges that the “Communists” had to go because they were “cruel” and would mutilate the faces of military Generals who wouldn’t cooperate with them, which is an interesting little fabrication. “So the communists weren’t cruel?” the child asks Adi later on. It’s a tough question for many reasons, one being that in many, many cases, the “Communists” weren’t even Communists.

Almost as maddening and frightening as this material is the attitude adopted by some interviewees; “The wound has healed,” grumbles someone who doesn’t want the murders brought up; the irony of someone who had a hand in perpetrating the wound pronouncing it “healed” is an exasperating one. Then there’s the ex-military man who starts lecturing Adi: “Do the relatives of the victims want this to start happening again?” he rumbles, quaking a bit. The real danger that Adi placed himself in is underscored by the film’s end credits: Oppenheimer’s co-director is called “Anonymous,” and there are over thirty more acknowledgements of an “Anonymous” as the credits scroll down.

The 2003 documentary “The Corporation” made much of the U.S. legal gymnastics that grant corporations a kind of personhood, along with attendant rights, and concluded that if a corporation were a person, it would be a malevolent sociopath. The portrait of Indonesia that emerges from “The Act of Killing” and “The Look Of Silence” places the national character in a sort of ongoing psychotic fugue state. Post-Holocaust discourse frequently used the phrase “Never Again” as a slogan, specifically referring to persecution of the Jews but also denoting a prohibition against barbarism; the events under consideration in these films are dispiriting reminders that human progress in this area has been meager at best. 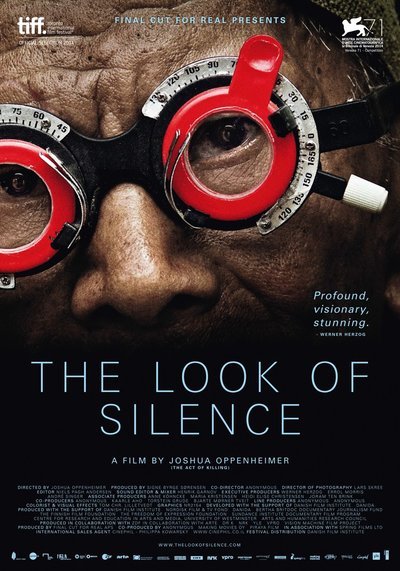